The Lodger: A Story of the London Fog. A Review THE LODGER: A STORY OF THE LONDON FOG

The Lodger: A Story of the London Fog was Alfred Hitchcock's third directing feature, but for all intents and purposes it was his first "Hitchcock" picture.  The themes that would dominate Hitchcock's films are all there: the wrongly-accused man on the run, the blonde that excites men to frenzy, the crimes themselves being secondary to how they affect others; it's as if The Lodger was his calling card to great film-making.    However, apart from the pedigree of the director, The Lodger would stand up as a great film for its atmosphere and how an audience can be manipulated so cleverly.

It is London, and a series of murders are being committed by a mysterious figure known as The Avenger.  This serial killer is after beautiful blonde women and on Tuesday nights, and it's the talk of the city.  In our opening, we get a description of The Avenger: tall, with a scarf covering his face.  Now we move on to the Bunting home.  Mr. and Mrs. Bunting (Arthur Chesney and Marie Ault) have a daughter, Daisy (billed simply as 'June'), who is being courted by a detective named Joe (Malcolm Keen).  She is young, she is beautiful, and she is blonde.  Into their world enters The Lodger (Ivor Novello), coming in from out of the fog, a man who is tall and wearing a scarf that covers his face.  The Buntings have a room to let, and he takes it.

Soon, Mrs. Bunting becomes concerned about the strange man within her presence.  The murders are coming closer to their home, and the mysterious man above them is going out in the late of night on Tuesdays.  Even more alarming, the unnamed lodger has become enamored with Daisy and her blonde hair, much to her distress and that of Joe.  Suspicion grows until we get a shocking twist, but by then it may be too late.

Hitchcock complained about the change he had to make to The Lodger to make it more palatable to audiences, especially fans of Novello.  However, while it would have been better if it hadn't been tweaked to make it more acceptable, the film still works.

If one takes a careful look at The Lodger, we see that the actual murders are unimportant (here again, another Hitchcock theme, that of 'the MacGuffin', the mystery/object everyone wants or talks about but which is not central to the actual story, but more on that later).  Instead, it is the suspicion built around the Lodger; all that we see points to him being The Avenger, but all we really have is just that: suspicion.  Still, with only circumstantial evidence, Hitchcock has already set the situation so brilliantly that we are already under his control about the identity of The Avenger. 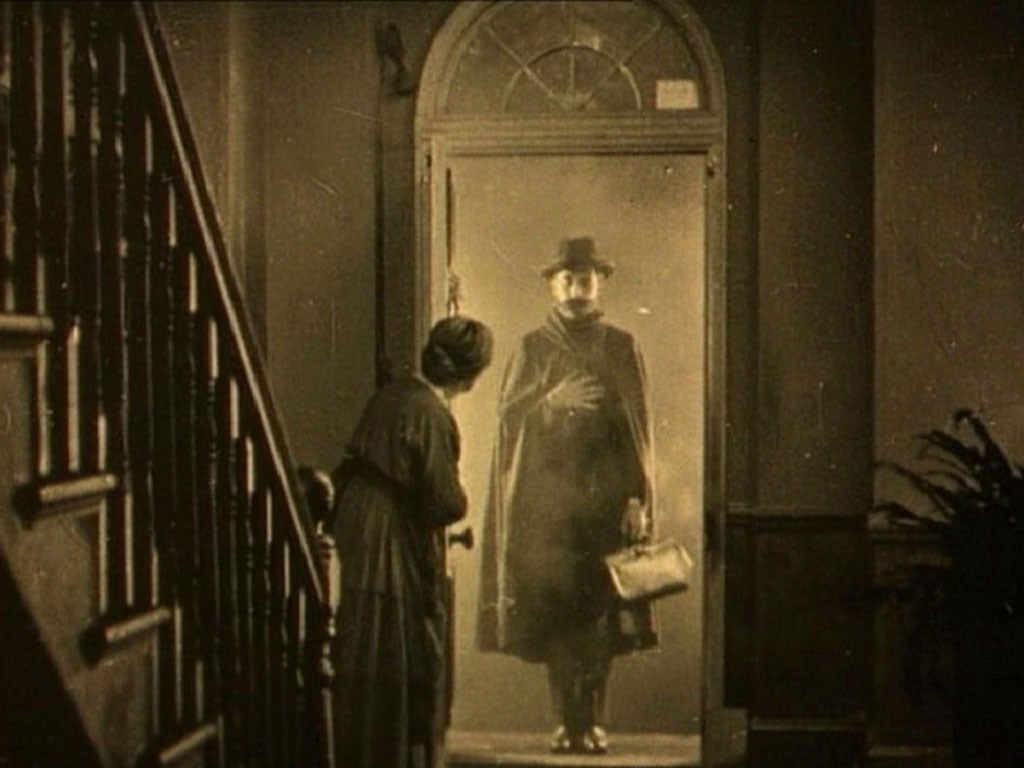 Being a silent movie, Hitchcock has to rely on the visuals to set the mood, and he does so brilliantly in The Lodger.  The opening titles, with their off-kilter typesetting and repetitive nature, suggest frenzy, and there are some amazing scenes that are wildly inventive not just for silent films, but really in cinema in general.  Take when we first see the lodger approach the Bunting home.  We first have the camera move towards the door with a shadow preceding it.  Once the matronly Mrs. Bunting opens the door, we see her reaction: one of shock, almost fear, and then see the lodger: a shrouded figure emerging from the fog, like a demon having escaped Hell.

Another massively inventive scene is when the Buntings are in the kitchen, discussing the man upstairs.  A chandelier that is dominant in the shot starts to move, and the three of them look up.  We then see the ceiling becomes transparent, with the feet of the lodger pacing back and forth.  Oddly, even in today's films, I doubt any modern director would try something so psychologically driven.

One can see the German Expressionistic influences Hitchcock was using so effectively in The Lodger.

By setting up the scenario of how the Avenger targets beautiful blonde girls early in The Lodger, Hitchcock's directing and Eliot Stannard's screenplay (billed as scenario along with uncredited work by Hitchcock and his wife, Alma Reville from the novel by Marie Belloc Lowndes) shift us not to the actual murders of the Avenger, but on our fears that the lodger is the dangerous murderer.

In the first few minutes, we learn the Avenger targets beautiful blonde women.  Later on, when the lodger sees his rooms, he is greeted by what seems to be a nearly endless parade of paintings of beautiful blonde women.  Hence, our suspicion.  When Mrs. Bunting returns to see if he will take them, she is surprised to see him turn the paintings around.  More suspicion.  Hitchcock allows the suspense to build with each new sequence, playing with the audience's expectations until we become convinced of the danger.

Visually, as I've stated before, there are some beautiful sequences.  It is clear that Hitchcock learned a great deal from the German Expressionists since the aforementioned shots, along with a remarkably shot one of a seemingly solitary hand descending a flight of stairs, have a strong feel for Weimar cinema.  The Lodger is a film that could be mistaken for one by Fritz Lang or F. W. Murnau.  The final concluding chase as the lodger is pursued by an avenging mob has a definite Expressionist look: when the lodger is brought down from the fence he's been caught in, it mirrors the imagery of Christ being brought down from the Crucifix, and when we see the lodger's face as he looks out the window, the impression of a cross is marked on his face.

Here, we have the beginnings of some of Alfred Hitchcock's great themes and motifs that run throughout his career.  The idea of the wrong man being accused goes from such early films like The 39 Steps through Suspicion, The Wrong Man and North By Northwest.  The theme of love or at least attraction/desire and murder or the threat of murder: Vertigo, Rebecca, Psycho, Spellbound.  The effects of guilt on the criminal or those related to the victim: Vertigo, I Confess, Psycho.  The cool blonde who drives men to frenzy: where to begin?

Oddly, there is another Hitchcockian aspect in The Lodger that I don't think has been discussed before: the theme of stairs or levels, especially descending down some. The Lodger is probably not the first to use stairs to mark a sense of impending doom or danger, but we see this again and again: from Rebecca to Suspicion to The Man Who Knew Too Much (1956) to Vertigo to Psycho to The Birds.  People going down the stairs, most of the time, were a source of tension and suspense for The Master of Suspense, and in The Lodger, it is the first instance of his using this device.

There's even a bit of comedy, although I doubt it would pass muster today.  One of the title cards is suppose to be dialogue from Mrs. Bunting.  It reads, "Even if he is a bit queer, he's a gentleman".  There's a lot of subtext to that line, given Joe the cop says he doesn't think girls aren't the lodger's type.  Read whatever you like in that.

Truth be told, by today's standards Novello's performance is highly mannered, almost exaggerated.  However, the performance is perfectly acceptable when it comes to measuring silent film acting.  He does have an intensity to his role whenever he appears enraptured by the beautiful Daisy.  I think the best performance was Ault's Landlady.  She almost always had a sense of fear and worry.  June, as Daisy, was pretty and she managed to bring charm to her character who has fallen in love with the unnamed lodger.

The Lodger is a brilliant film in general.  It is a brilliant silent film.  It is a brilliant Hitchcock film: a finely-crafted suspense picture that leads you in the wrong direction but which puts you at an advantage over the characters.  As I stated earlier, the identity of the actual Avenger is unimportant (that would be the MacGuffin), since the case is solved off-screen.

Rather, the film is not about murder, but suspicion.  The Lodger is a brilliant way to start one of the greatest cinematic careers in history.