He's quintessentially American, yet a true Irishman at heart.  The career of John Ford is one any filmmaker envies, as his extraordinary output.


Now, where exactly does John Ford's genius lie?  I think it's in the fact that he was able to make films that were both intelligent and popular, never playing down to audiences but most importantly, trusting them to not only follow the story but care about the characters and the situations they were in, both serious and comic.

Let's look at just a few of his extraordinary films, and start with the obvious: the Western.  Ford is the man who has shaped the idea of what the Wild West was like for Americans and the world than any other director.  A central part of the myth-making by Ford was in his selection of Monument Valley, Arizona and Utah as the background to many of his films.  Here, in this sparse landscape, we see the visual theme Ford kept coming back to: the smallness of man against the massiveness of nature.  The characters in Ford's films were ones that struggled against great odds, either from nature or from man's actions himself.

I think two of the Westerns he made with John Wayne show that Ford knew how to make a picture that worked on two levels: an emotional one and an intellectual one.  The first is Stagecoach.  While it's a curious thing that the story of disparate people thrown together appears almost as a cliche today, Stagecoach may have been the first one to have that plot, at least certainly the best one to have that scenario.  Even in the characters themselves, we have stereotypes: the drunk doctor, the hooker with a heart of gold, the outlaw as the good guy.  In Stagecoach, Ford tells the overall story of the adventures the group, including an exciting climatic chase across the desert, while also keeping their individual stories interesting and never losing focus of them as individuals and as part of a larger story. 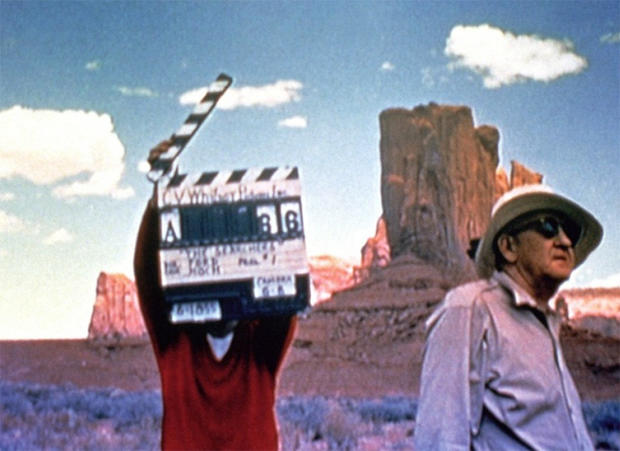 The second Ford/Wayne Western I'd look at is The Searchers, as intense a story as ever made.  As all great films, The Searchers works on those two levels.  One can watch it as an adventure story: Ethan Edwards (Wayne) and his adopted nephew Martin (Jeffrey Hunter) are on a search to recover Ethan's niece Debbie (Natalie Wood), his brother's daughter.

However, while it is possible to end watching The Searchers at that, one can't really finish The Searchers without thinking it a strong meditation of one man's whole way of life ending.  The character of Ethan is not someone a person would like: he is racist, holding an intense dislike for Martin because he's part-Native American and he's come to his brother's home after fighting for the Confederacy.  That fear that Debbie may end up being 'one of them' is one of the driving forces that keeps him on his desperate hunt to 'save' her.

There is, however, more to Ethan.  He is a complex character.  Within him is a righteous fury for vengeance, and in many respects he is the mirror image of his antagonists.  However, there is still a spark of humanity, a need to genuinely protect and love that is in conflict with his need to take life (and in one scene, even take from the afterlife).  Despite how horrid Ethan is, at the end of The Searchers you feel a great sadness for him, a sorrow that he is the one condemned.  Above all else, The Searchers puts to rest the idea that John Wayne could not act: his Ethan is one of the great performances on film, a truly complex and conflicted individual whom you can't love but you can't hate either. 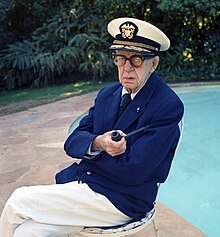 Ford is primarily remembered as a director of Westerns; in fact, at a famous Directors Guild meeting where the issue of loyalty oaths during the Red Scare of the 1950;s was at its peak, Ford began his remarks by saying, "My name is John Ford.  I make Westerns" as if anyone in that room, even his nemesis Cecil B. DeMille didn't know who John Ford was.  However, his output showed he was really a master of all trades.  If we look at some of his non-Western films, you'll also see some extraordinary films.

First, we see Ford's genius in The Grapes of Wrath.  In 1940, when Depression audiences wanted primarily escape from the troubles of the world, Ford put it out there for all of them to see.  The film has never lost its power or relevance which now, in the time of the Great Recession, is worth considering.  Audiences then and now can find themselves in the Joad family, the struggles they endured: from losing the farm they'd had for generations right on down through Henry Fonda's beautiful closing speech, a truly haunting moment in film.

We also see it in his homage to his homeland: The Quiet Man.  This is a bit of a departure for Ford in that its a pretty simple, straightforward story:  an ex-prizefighter going back to Ireland, land of his birth, and falls in love with his rival's sister.  In The Quiet Man we get a love letter to Eire and something rarely associated with John Ford: a flat-out comedy.  It's a funny film, full of whimsical Irish characters.  Is it misogynistic or cliched?  Well, as I believe Martin Scorsese pointed out, we aren't meant to take it seriously.

What puts John Ford at the top ranks of all directors is that he knew what would work both visually and story-wise.  His grand vision of the American West is now so iconic that we couldn't picture the frontier any differently than in the canvas he painted for us.  When we think the West, we think Monument Valley, we think the cavalry riding out into battle or into the sunset.

However, as grand as the visuals in a John Ford picture may be, Ford understood what more than a few current filmmakers don't or have forgotten: great visuals will not help if we don't have a story to back them up.  I go to one of my personal favorites in the John Ford canon: 3 Godfathers. 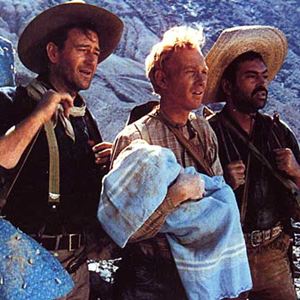 One of the great things about 3 Godfathers is that the symbolism of the Three Not-So-Wise Men comes across without being overt.  Three bandits come across a dying woman and her child, and they promise to bring her child to safety but by doing so, they will have to meet the law.  While there is action, there is also in 3 Godfathers a story of redemption as the three bandits risk so much for a child, showing the humanity that lies within each person.  We even get a bit of comedy whenever the bandits bicker about the child's full name.

For me, the most moving moment is when one of the bandits (John Wayne), is struggling to move ahead, overwhelmed by exhaustion.  He keeps moving because someone, a total innocent, pushes him on, as do the voices of his compatriots.  Who says there can't be tenderness and true heart in a John Ford picture?  In 3 Godfathers, and in many of Ford's films, he can have the action or romance an audience would want, but not give up on the story.

Finally, as for the myth of the West Ford created, he knew it was a double-edged sword.  In Fort Apache, Ford doesn't shy away from presenting the truth: that hatred and stupidity cost American lives and ushered the near-annihilation of the Native Americans.  However, here and in The Man Who Shot Liberty Valance, also made it clear that we also need to 'print the legend', that sometimes history is messy and ugly, and that we need things to believe in.

John Ford made Westerns, some of the best and most enduring and influencial.  However, John Ford made some of the greatest films in any genre: the tragedy of The Grapes of Wrath, the humor of The Quiet Man, the conflict within man in The Searchers, the tender reflections of youth against the harshness of adulthood in How Green Was My Valley.   John Ford made films.  He made Great Films.  He is and will remain a Great Director.

There are more Great Directors from the past and present, with more to come.
Posted by Rick at 11:32 AM