Friends With Benefits: A Review 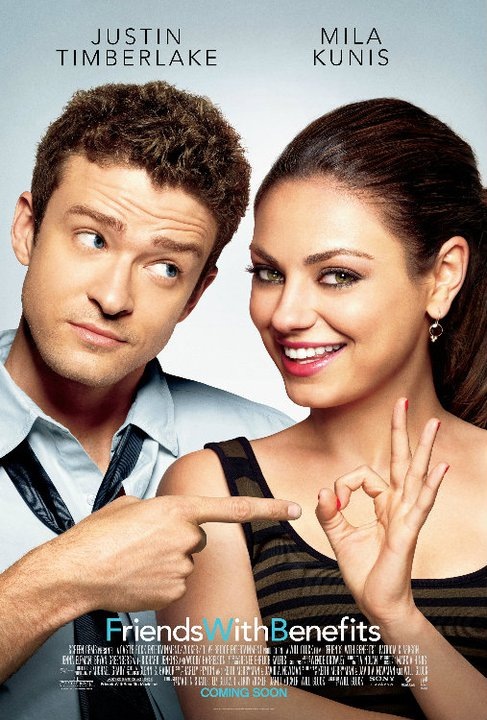 I admire Justin Timberlake, not as an actor or even as a star.  Rather, my admiration of Timberlake comes from his stubbornness and obstinate belief that he is an actor.  I even admire my fellow critics who decided that Timberlake playing a version of himself in The Social Network somehow put him on the same level as a Sinatra: a singer who can act.   I may be in the minority on this, but somehow, I think I'm the last person left who thinks that Sinatra is both a better singer and better actor than Sexy Back, and moreover, that Mr. Back will never reach the same level of brilliance as The Chairman of the Board.


Friends With Benefits is not just a follow-up for Timberlake's "brilliant" turn in The Social Network, but also the follow-up to Mila Kunis in her authentically brilliant turn in the brilliant Black Swan.  Having already seen No Strings Attached (a film with a similar premise) Friends With Benefits tries to do the former one better: it tries to be both a romantic comedy and an attempt to mock the very conventions of a romantic comedy film it dutifully follows.

Dylan (Timberlake) and Jamie (Kunis) have been dumped by their respective girl & boyfriends in Los Angeles and New York respectively.  Jamie, a recruiter for companies, is attempting to lure Dylan to work at GQ Magazine.  After taking a meeting, Dylan takes the job, where he meets sports editor Tommy (Woody Harrelson), who in a 'twist' is gay.

Dylan and Jamie become friends, and one night after watching a romantic comedy, he offers Jamie a proposition: a purely sexual relationship.  She agrees, and we get plenty of booty calls, even one interrupted by Jamie's lush of a mother (Patricia Clarkson).  Eventually, Jamie attempts a real relationship with Parker (Bryan Greenberg) whom she met at a park, but like always, it doesn't work.

Dylan takes Jamie to California to spend the Fourth of July with his family: his sister Annie (Jenna Elfman), her son Sam (Nolan Gould) and his father (Richard Jenkins).  Dad has Alzheimer's, but even he knows what these two don't: they are in love and should be together.  Dylan and Jamie's relationship is strained due to his reluctance to be in a 'relationship', and after they stop talking to each other eventually they realize he/she is The One. 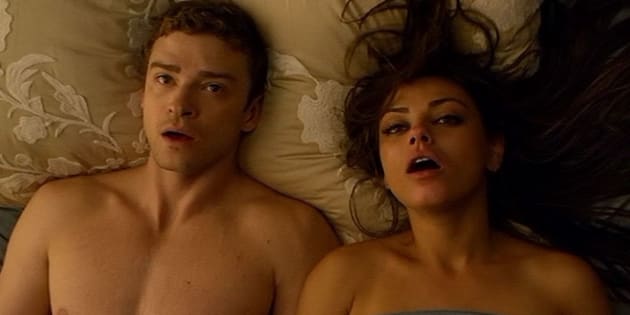 I figure that there was an attempt to be clever in Friends With Benefits by having the characters point out how modern-day romantic comedies follow certain standards: the arrival of one of the lovers at a departure station (airport, railroad station) at the end, having the music cue the emotions, ending with a peppy pop song to have the audience leave feeling good.  However, the script by Keith Merryman, David Newman, and director Will Gluck (from a story by Merryman, Newman, and Harley Peyton) is almost slavishly devoted to these very conventions and even throws in a few more: the almost requisite gay best friend, the cute kid, the ill parent.

We also have a few others we don't expect.  Dylan, we're told, had extreme difficulty doing simple math and had to get speech therapy for a stutter.  Shortly after, we see Dylan incapable of multiplying 6 x 3 (I think he came up with 98) and lapse into a stutter.  However, this situation does not appear until after it's mentioned and only the adding returns once.  It's not a good thing to introduce something late in the film then to never mention it again.  If it had come up earlier and in a consistent manner it would have been believable.  As it stands, it's just a plot contrivance. 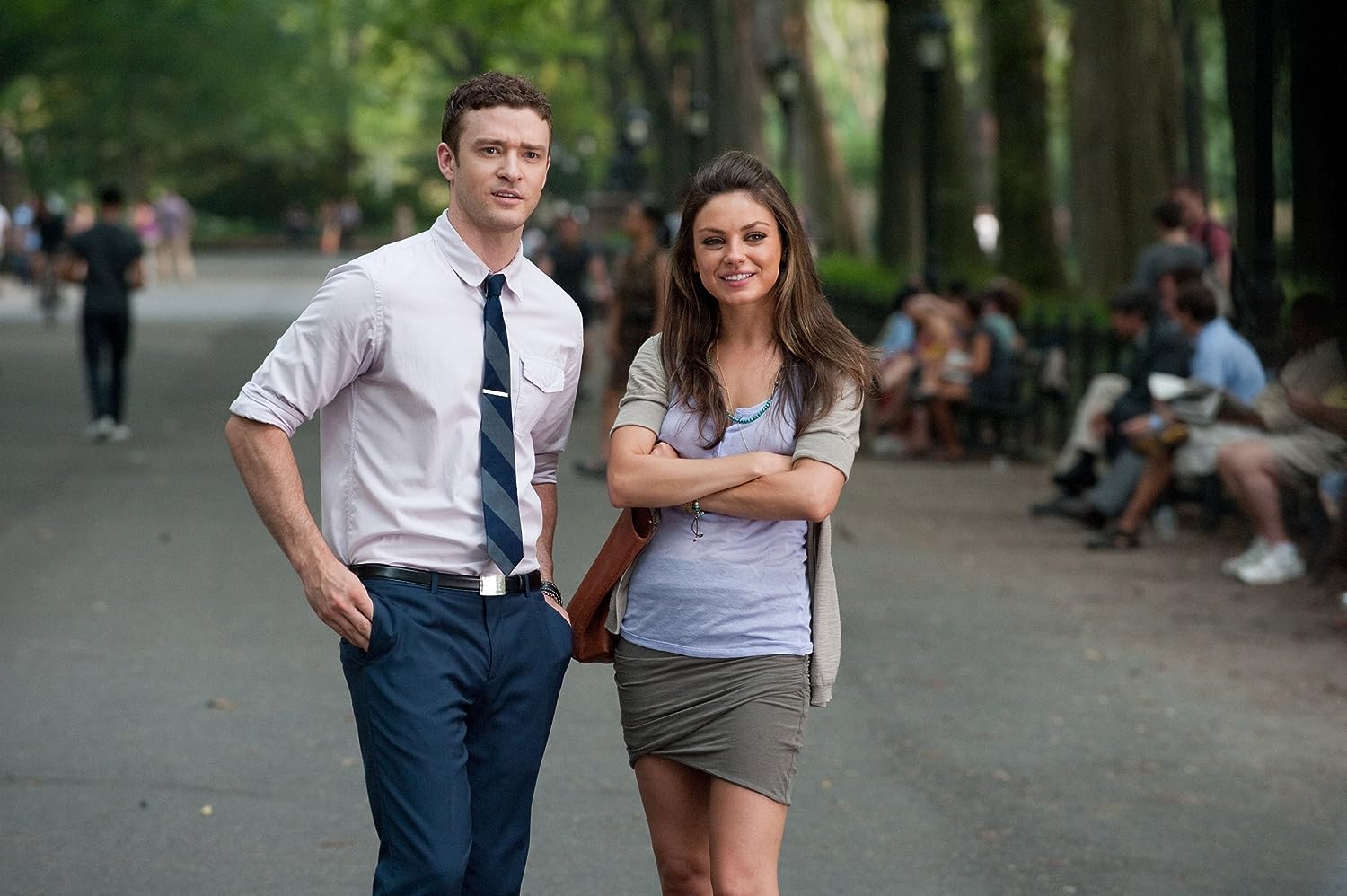 Where Friends With Benefits goes wrong is that the casual sex comes out of nowhere: the suggestion comes only after Dylan appears to look at Jamie with lust, making his idea more a request to fill his own desires than anything else.  Also, Jamie is remarkably quick to go along with this idea; she doesn't think about it, but goes along with it rather quickly.

Side note: I wonder if this is just male fantasy given it was written by three men.

One thing that did concern me is the Parker subplot.  One imagines that the relationship she's started, which was done in a quick series of clips and appears to be actually genuine, one expects that Parker will be a love rival to Dylan.  However, that aspect is dropped pretty quickly and unrealistically.  We know it's done because, like all romantic comedies we know our two characters are going to be together, but to introduce it only to drop it so quickly just seems like such a waste of our time.

The performances didn't break new ground.  Sexy Back is still Sexy Back, the film allowing him to show his body and his singing skills but not his actual acting.  His delivery is remarkably passive but the film does allow him to mock John Mayer, so that gives him points in my book. What is interesting is that Kunis is giving pretty much the same rapid-fire delivery to her lines that she did in That 70's Show, almost as if she's running out of air and has to get everything out before the oxygen runs out.

The secondary characters range from the useless to the downright creepy.  Harrelson is just there almost because like most romantic comedies we have to have a gay character in there.  However, he doesn't add much if anything to Friends With Benefits: he isn't called for advice, which I understand is the requirement of the gay character.  The little boy performing magic badly adds a 'cute' factor, but his ultimate reason for being is to provide a way to have one character overhear the thoughts of the other like most romantic comedies have. Oddly, both parents end up being creepy though for different reasons.  Clarkson's character is a near-hopeless lush that pops in and out to bring confusion as to what Kunis' character's ancestry is (Kunis is Ukrainian).  Jenkins appears to be specializing in dying or ill characters as he gave a similar performance as a similar character in Dear John, and he appears again to exist only to give Dylan a motivation to not commit.

However, both Dylan and his dad appear to agree that Captain Chesley Sullenberger really didn't contribute much to the "Miracle on the Hudson", and this constant Sully-bashing is not only bizarre but almost mean-spirited and unnecessary to anything going on around here, as is the appearance of snowboarder Shaun White who keeps threatening Dylan with bodily harm.

I digress to say we even ended Friends With Benefits with a musical number courtesy of a flash mob.  Talk about using conventions of a romantic comedy.

The only bright spot was when Jason Segel and Rashida Jones appear in the romantic movie Jamie so loves.  They were overacting, but at least they were suppose to.  In fact, it seem that there were a lot of movies being shown or referenced in Friends With Benefits: when discussing their 'special relationship', we see Bob & Ted & Carol & Alice playing on a television.  When they are having sex for the first time, we see a poster for It Happened One Night (a gold standard in rom-coms, by the way). Later on, we see On The Waterfront playing in the background.  Were they trying to show us what better films look like?

Friends With Benefits tries to have it both ways: mocking and adhering to rom-com conventions and failing at both. Its message: that you can't have sex without encountering emotional complications, apparently shocks the characters.  Why this is a surprise to anyone I don't know.  I don't think it's a terrible film, but it isn't one that is funny or clever or worth one's time.  In short, you won't benefit from this relationship.