The Tourist: A Review 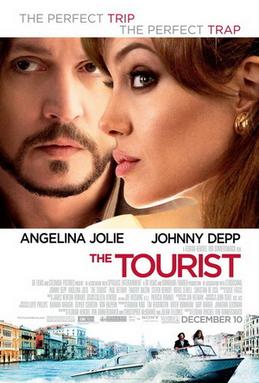 What do you get when you combine four Oscar winners in acting, directing, and screenwriting with a three-time Oscar nominee and put it all together in one of the most beautiful settings on Earth?  An unholy disaster.

The Tourist will go down in history as perhaps one of the worst films in the careers of all concerned: a slow, dull, lifeless affair that tries too hard to be a lot of things, except a good film.

Elise (Angelina Jolie) is a beautiful mystery woman being pursued by British Agent Acheson (Paul Bettany).  She knows the whereabouts of a mysterious criminal named 'Alexander Pearce'.  Despite relentless surveillance, she saunters away to Venice.  Having been given instructions by Pearce to find someone his height and have those trailing her think it's him, she settles for mild-mannered math teacher Frank (Johnny Depp).  Soon, the befuddled Frank finds himself being passed off as Elise's husband, but there is trouble afoot.

A mole inside Scotland Yard has informed Sebastian Shaw (Steven Berkoff) that Pearce, who stole money from him, has been spotted in Venice.  While Acheson (without Topeka or Santa Fe) knows Frank is not Pearce, Shaw and his Russian henchmen don't.  With that, they go after Frank.

Elise helps Frank escape, but Frank, now apparently in love with her, knows she's in danger, so he attempts to rescue her from Shaw, even after he is caught by Acheson.  Eventually, they make an escape and we get one walloping twist about Frank that was both easy to discern and completely idiotic. 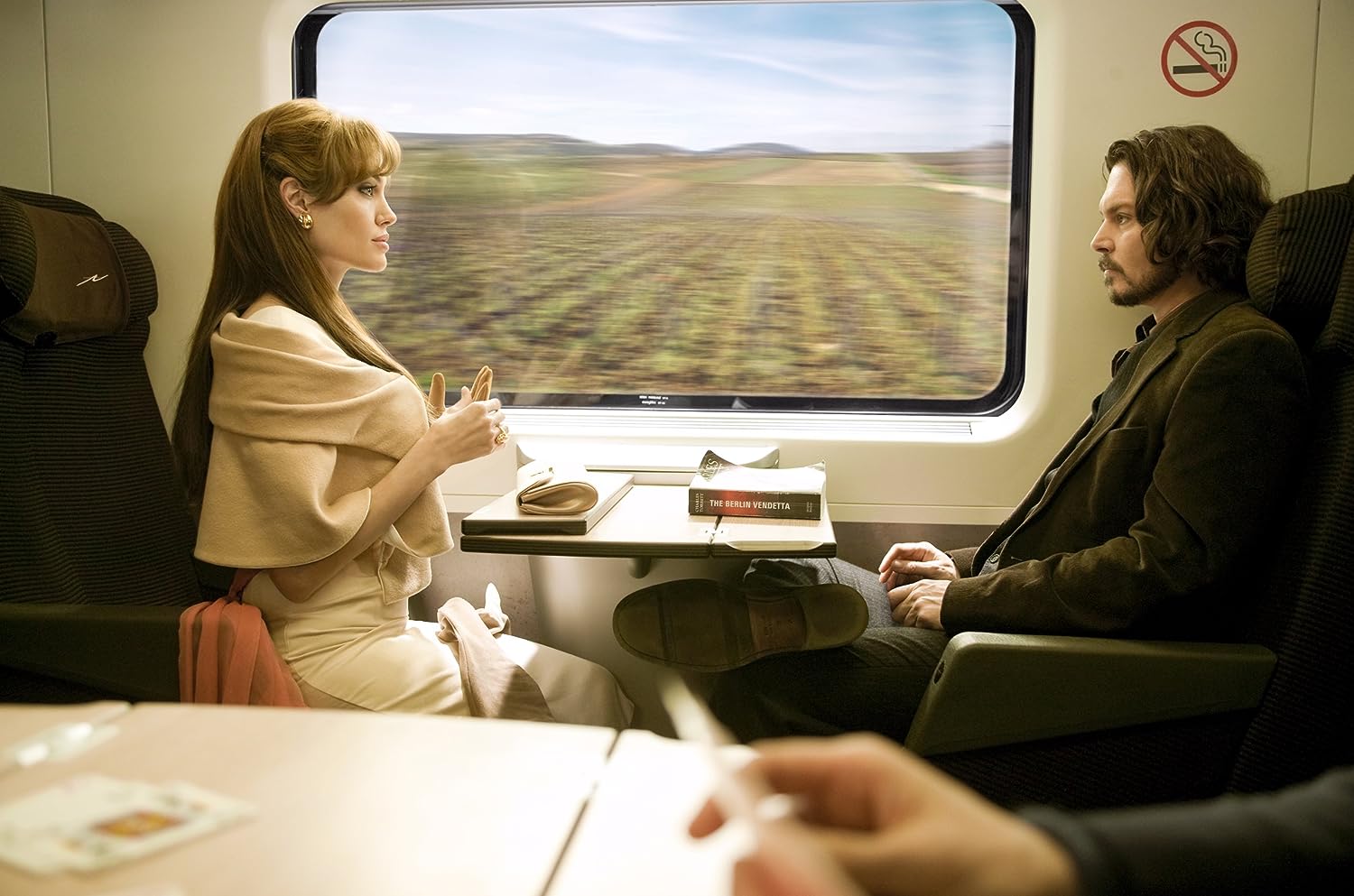 It's one thing to know what The Tourist was going for: a frothy romantic caper full of twists, mistaken and false identities.  It's another thing to see that it never appears to decide whether to take the material seriously or play it for laughs.

The big reason why the story never gels is I think because of two of the three credited screenwriters.  On the one hand, you have Christopher McQuarrie, the man behind The Usual Suspects and The Way of the Gun is all for action and tough gangsters.  On the other, you have Julian Fellowes: he of the Gosford Park/Downton Abbey brand of light, witty British drawing room humor and the costume lavishness of The Young Victoria.

How do you reconcile gritty with frothy?  Granted, both like a good twist in their stories, but in truth, what the viewer sees in The Tourist are two differing interpretations of one story trying to create a mash up but shortchanging both views.

Take as a textbook example of where The Tourist goes wildly wrong: the scene where the Russian henchmen find our Frank.  Earlier in the film, Frank doesn't appear nonplussed in any way that a woman he's met less than a day ago is not only introducing him as her husband at her hotel, but putting him up in her lavish suite.  In any case, she's left the room, and Frank soon finds himself under siege.  He calls the Front Desk and attempts to tell them that there are men shooting at the door, but he does so in Spanish (at one point the Italian desk clerk compliments him on his Spanish).  In desperation as the two assassins are about to blast their way into the bathroom, Frank goes out the window in his pajamas and races across the roofs of Venice, until literally landing at a fruit market.

Let's start with the Spanish business.  Frank does not appear to understand the difference between Spanish and Italian, and while that might have been funny Depp delivers his lines in such a dull, bored manner it almost appears as if he were drugged throughout The Tourist.  If your character truly does not realize he's speaking Spanish to Italians he should do it in an almost enthusiastic 'ignorant American' manner where he truly believes he's speaking Italian, not in the mumbling manner Depp adopts.

It also makes him look dumber than he is, given he's suppose to be a math teacher you would ascribe him some intelligence, and it ends up being pointless with no payoff.  No one appears to bother in trying to correct his mistake; it would have been funnier if anyone pointed out to him in Spanish that he was speaking Spanish not Italian.  The fact that everyone he spoke Spanish to appeared not to think anything of it just made no sense.

You try to mix the excitement of a rooftop chase with the comedic elements of a bumbler, but you never buy it.  This is just one of the many times you try to mix elements of comedy with elements of action, but nowhere in The Tourist do you get the idea that the movie is either suppose to be funny or exciting.  Instead, The Tourist just ambles along, dragging scenes where not only is nothing really happening but everyone appears to be almost bored with the proceedings.

The boredom extends to the two stars.  Depp is the worst of the two: he is dull, lifeless, unbelievably flat; as I've stated, he appears to be drugged because his line readings are in this mumbling monotone.  In every scene in The Tourist which he is in Depp doesn't seem to be capable of expressing any emotion whatsoever.  Given he is Johnny Depp, this is flat-out impossible.  Rather, the fault for Depp's dull performance lies equally between Depp's decision to play it in a lackluster way and director Florian Henckel von Donnersmarck, who allowed him to make Frank a dull and boring man along with a bit of a wimp.

As if to counteract Depp, von Donnersmarck decided Jolie would be the glamorous femme fatale to the Nth degree.  The problem in this case was that we got endless images of Jolie looking glamorous but that was it: she was only a model, not a person, let alone a character.

To add to the misery of The Tourist, the scenes between Jolie and Depp appeared to have nothing between them except air to misquote a line from Singin' In the Rain.  I think it is instructive to point out that The Tourist appears to want to imitate North By Northwest in the repartee between a glamorous mystery woman and a befuddled average man on a train (this may be the ONLY time I refer to Cary Grant as an 'average' man, but I digress).

In The Tourist, Jolie and Depp deliver their dialogue in a slow, still, forced, uncomfortable, and unnatural manner.  They don't appear to be actually speaking to each other; rather, they appear to be memorizing their lines as they go along.  When trying to have an amusing and clever repartee between two characters, it helps when the delivery of the lines are fast, with one almost jumping on the other.  When they go at a glacial pace, it's going to fail.

Here is where The Tourist commits its greatest sin: for an action/comedy, it moves so slowly that by the time we get to what is suppose to be the climatic moment, the audience has been dulled into either sleep or mind-numbing disinterest in whatever is going on.   The whole film moves so slowly that we stop believing any of this is either possible, funny, exciting, clever, fun, or interesting.

I'd like to speak on the minor characters.  When I saw Berkoff on the screen, the first thing I said was, "Is that General Orlov from Octopussy?"  Bettany is growling around as the determined agent but with no real reason as to why he is such mad pursuit of Pearce to where he is willing to work on the case despite being told not to by his superior (Timothy Dalton, appearing in only two scenes).  Throw in Rufus Sewell in a useless and mostly mute performance, and all these elements create one of the worst films of 2010 if perhaps of all time.

Lest I forget, the score for The Tourist comes from James Newton Howard, who is the the archenemy of good film music, the Anti-Herrmann.  It attempts to be a cross of jolly and clever, but like The Tourist itself, fails in both respects.

Finally, the sheer absurdity of both the plot and the totally ridiculous ending sinks The Tourist: we get a "twist" ending that simply defies logic and cheats because it never gives us the audience any evidence that what we're told about Frank could possibly lead us to accept that he really was Alexander Pearce.  You can have a twist ending, but play fair: give us hints or suggestions that said twist can be plausible, not arbitrary.

The Tourist has nothing going for it: no wit, no joy, no excitement, no point.  Not even the beauty of Venice is enough to make The Tourist watchable.