The Help: A Review

I figure that as a Hispanic man, I'm not the target audience for either the book or film version of The Help. Therefore, going into the film, I feared I would endure a chick-flick: a story of women relying on themselves for emotional support.  Truth be told, there is that in The Help, but there is also a wide variety of human experiences wrapped in the film: humor and heartbreak, the evils of bigotry and the tragedy of human failings.  The positives of The Help outweigh some of the flaws, but we'll get to that shortly.

Aibileen (Viola Davis) is a humble woman and maid to Leefolt family.  Her life is just work and church: taking care of white folk, bringing up their children while having to live without her only son and enduring the bigotry both casual and legal in 1963 Jackson, Mississippi.  While the Leefolts do not object to having Aibileen use their toilet, their friend, Miss Hilly (Bryce Dallas Howard), most certainly does.  She is convinced that not only is 'separate but equal' is the most beautiful thing in the world and the way the Negroes would want it anyway, but she pressures Aibileen's owner, I mean, employer Miss Elizabeth (Ahna O'Reilly) to implement Miss Hilly's initiative: building separate toilets for the Negroes so as to have the good white folk avoid the risk of coming into contact with the colored's diseases.

Into this world returns Skeeter Phelan (Emma Stone).  She has returned to Jackson after graduating from Ole Miss, get some experience and care for her ill mother Charlotte (Allison Janney), Skeeter doesn't like what she sees, especially her friend Hilly's initiative.  Miss Skeeter is especially displeased that her Mammy, I mean, her family's maid Constantine (Cicely Tyson) has left abruptly without saying good-bye.  As Miss Skeeter starts looking round, she comes up with a brilliant idea: write about the maids from their perspective by interviewing them, starting with Aibileen.  What Skeeter proposes is dangerous, even illegal in the Deep South, but eventually Aibileen consents when she has seen and heard enough of the injustice around her. 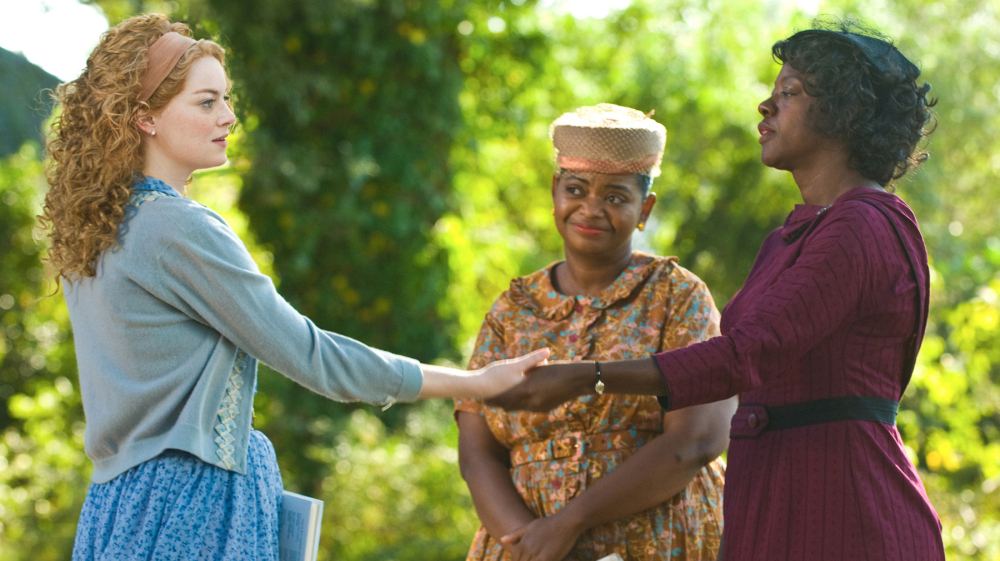 That injustice is handled differently by Aibileen's friend, Minny Jackson (Octavia Spenser).  As Homey the Clown might say, "Minny don't play that".  While Minny knows she can only do so much, her breaking point comes when there's a storm in Jackson.  Minny needs to use the toilet, but while technically her employer is Missus Walters (Sissy Spacek), Missus Walters' daughter is Miss Hilly, and she ain't about to let Minny use her toilet.  That rainstorm with high winds and fierce downpour shouldn't bother her Negro: an umbrella should be enough.

Well, it isn't, and Miss Hilly fires her on the spot.  She also makes it impossible for Minny to get hired anywhere, except in one home: that of white-trash but well-married Emmie Slattery, I mean, Celia Foote (Jessica Chastain).  She is too low for Miss Hilly to bother with, so Minny gets the job from an eternally grateful and naive Celia.   Soon, both maids talk to Skeeter, and New York editor Elain Stein (Mary Steenburgen) will get her book published, but not without more maids.  Eventually, after seeing an act of cruelty by Miss Hilly against her new maid and the murder of Medgar Evers, the maids find the courage to speak to Skeeter.

The secrets and revelations they tell her, all of course with pseudonyms, are published in the book, The Help, which soon scandalizes the whole town, especially the revelation of Minny's Terrible Awful committed against a woman bearing a striking similarity to Miss Hilly, an incident that is both funny, just, and horrifying.  Miss Skeeter also learns the truth about what happened to her Constantine and, after a romance with Stuart (Chris Lowell) has grown but ended, she goes to New York; the combative Minny finds a new home and the respect and genuine love of Miss Celia and her husband Johnny (Mike Vogel), and Aibileen is acknowledged by the black community for her courage in speaking out (even if was anonymously) and finds the courage to do so openly after a confrontation with Miss Hilly.

The Help has one of the best performances of the year from Viola Davis, who has a series of great performances to her credit already.  Aibileen is a haunted woman: haunted by loss and by the indignities she must endure because of her color.  She is someone who, to use the parlance of the day, 'knows her place', but also knows that it is not right but not how to make it right.  Just in her looks, her expression of sadness and acceptance of how things are, Davis communicates the interior life of this domestic.

She also has an extremely powerful moment when she recounts the death of her only son.  In her delivery, a mixture of calmness and hurt and fury, she tells us so much more than what her words are saying, although they say quite a lot about the pain Aibileen has suffered.  Her love and concern for the children under her care is genuine, but also her fear of her owners, I mean, employers.

As a yang to her yin, Spenser's Minny is a sassy woman who won't take no guff from nobody.  For the most part, she has an incredible amount of strength within her, and the wisdom to guide Miss Celia through her inability to know what to do to keep house.  Minny doesn't hold back but like Aibileen, knows the rules a maid has to follow to keep herself both safe and employed.  While we can imagine Minny could have done the Terrible Awful to Miss Hilly, we do get hints that she is also a battered woman; her lover isn't seen on screen but it's clear she gets beatings from him.

Another strong performance is Bryce Dallas Howard.  Few women have been as repugnant as Miss Hilly in their bigotry and their blindness to just how intolerant and cruel they are.  At one point she warns Skeeter against reading the laws governing the relations between non-whites and others by saying "real racists" would go after her.  Miss Hilly has no redeeming qualities, and her inability show common human decency makes her even more repulsive.

Not to be outdone, Chastain has an endearing quality to Miss Celia.  She is more naive than dumb, but underneath her common exterior is a truly kind person who has, like almost every woman in The Help, suffered some terrible things which she keeps from Johnny.

I digress to point out that Chastain has become the It Girl of 2011: she's been in The Tree of Life, The Debt, and The Help with no hint that she's going to slow down.  Her versatility in all three films show her as an actress of range and certainly one that will have a healthy career for the time being.

Of all the performances and plot points in The Help, I argue that the Skeeter part was the weakest and most boring.  I kept wondering if Skeeter was from Jackson, why would four years at Ole Miss suddenly erase from her memory the fact that Jackson was a center for apartheid American-style.  I was genuinely surprised that she appeared so oblivious to the fact that black and white women didn't mix; how she could offer to give any black woman a ride in her car without realizing how unacceptable it was is beyond me. As portrayed by Stone, Skeeter came off as a bit too chipper to see this project as anything more than a way to get her foot in the door.  She didn't seem committed to social change, just to a good story.

Add to that this The Help via Skeeter is essentially a 'white savior', the noble white figure serving as the catalyst for the African-American characters to achieve equality.  A case perhaps can be made that at this time, African-Americans, particularly women, had less chances to do more to achieve equality.  However, the whole being of Skeeter is a bit discomforting.

Moreover, Skeeter's romantic life was of no interest and served to lengthen the film to its 146 minute running time.  Of the nearly two-and-a-half hours, I could have done with much less of Skeeter's romance with Stuart. Much, much less.  I know that Skeeter was the device to get the maids to tell her story, which is how the novel by Kathryn Stockett has it and the screenplay by director Tate Taylor (a friend of Stockett's), has kept it, but for my part, I didn't care about the fact that Skeeter got the maid's perspectives. 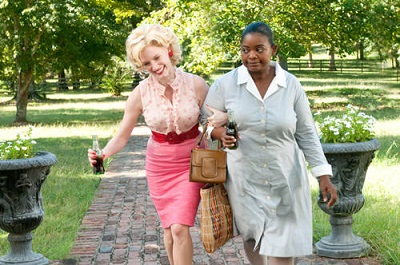 Another thing that troubled me and yes, irritated me, was the dialect-heavy nature of the dialogue.  I figure that perhaps this is how African-Americans spoke in 1963, dropping the "g" at the end of words, using "ax" for "ask", using "ain't" as a word.  This manner of speaking became so prevalent I was almost tempted to mock it by writing my review using the same style (examples: Miss Skeeter don't want no weddin', she done wants a job; she don't know nuttin' 'bout way things done up in this here Jackson; Minny done teach her chil' Sugar how to be maidin').

In the end, I couldn't write that way: it would make it look like I was deliberately mocking the characters (and on a personal level, I would find using that style of writing rather odious).  I figure this is why the fact that an Anglo writer wrote her African-American characters to speak in this manner is a source of controversy.  For myself, I can't say whether this was the way African-Americans actually spoke in the early 1960's, but that aspect of The Help left me cold.

This point about dialect becomes so overwhelming at times one soon begins to wonder if The Help is taking place in 1963 or 1863.  There are two mentions of Gone With the Wind and the Mammy character, but how is Skeeter's relationship with Constantine any different from that between Scarlett O'Hara and Mammy?  Constantine's near-total devotion to "her" family appears to show that the Civil War really changed nothing in interracial relations except removing legal white ownership of blacks.   I saw Miss Celia as a mash-up of Emmie Slattery/Belle Watling from the Margaret Mitchell novel.  The way the maids always referred to their employers as "Miss So-and-So" had me wondering if Prissy or Kizzy would be popping out anytime soon).

Here is where the flaw in The Help mostly lies: the stories of Aibileen, of Minny, of Constantine, and of all the other maids is submerged with that of Skeeter's ambitions to be a writer, of her love life which I really didn't care about, and of Skeeter's view of the help.  Actually, from what I saw of The Help the character of Skeeter didn't even appear to be that important to the plot.  When we see Aibileen or Minny, when we genuinely see things from the perspective of 'the help', we get a glimpse into the injustice of segregation and the struggles black women had on their way to genuine equality as women and as women of color.  When we shifted to Skeeter's romances, I was bored.

The Help has truly moving moments thanks to Davis and Spenser, and moments of comedy thanks to Spenser in particular.  We have some of the best performances from both heroines and villains and a story that has us care about the characters.  It's easy to be moved by the story of The Help and about how change is gonna come.

Who knows: perhaps in the lifetimes of the characters in The Help, America may actually elect a black President.