No Strings Attached: A Review 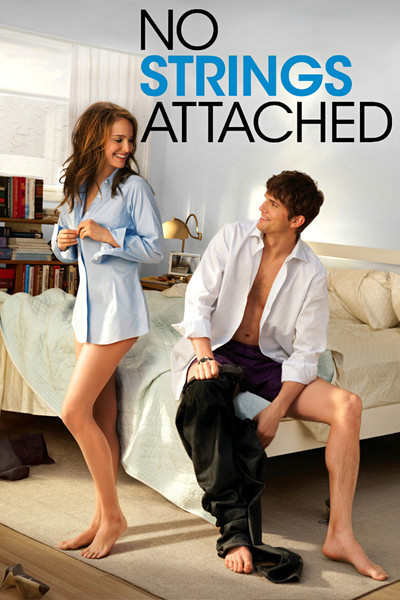 There's love, there's lust, and then there's this: two 'adults' who agree to have sex with each other without any commitment.  In the past, it used to be called prostitution, but because no money is exchanged and the two involved know each other, it just makes it sex for fun.  No Strings Attached is the first of two films in 2011 that explore whether an association built strictly on gratifying another's physical pleasure can work in the long-term.

And who says Hollywood is out of ideas?

Our story actually starts fifteen years before the main events. Adam (Ashton Kutcher) and Emma (Natalie Portman) meet at summer camp, where our shy young man, son of a famous actor, wants to get it on with her.  She coldly refuses.  Five years later, they meet again at a frat party.  This time, Emma's a little more flexible: she invites Adam to "this thing" she has to go to.  The "thing" ends up her father's funeral.

Cut to One Year Ago, where Emma is a medical student and Adam is a production assistant at a High School Musical/Glee-type show.  They run into each other again; funny how they keep running into each other every few years, isn't it. He wants to write for this show and not use his father's name or connections to move ahead. She, so jaded by the world, doesn't want any kind of relationship.  Adam is devastated to find his father Alvin (Kevin Kline) is now having an affair with his ex-girlfriend.  After drunkenly arriving at her place which she shares with her friends Patrice (Greta Gerwig) and Shira (Mindy Kaling), Emma and Adam almost spontaneously decide to be lovers without being in love.

Soon, they are going at it like rabbits; a series of booty calls later, Adam decides Emma is "the one", but there are problems.  One, he has a love rival in Sam (Ben Lawson), who is Emma's fellow med student.  Two, Emma's reluctance to give her heart to anyone.  Three: Alvin's shenanigans with Adam's ex.

Still, after a while Emma starts getting jealous when Adam isn't with her, and with her sister about to get married, she realizes she must go, for once, with her heart.  In the end...well, you can take a guess.

To its credit, No Strings Attached didn't have the almost obligatory "going to the airport to tell the person he/she is in love with him/her" (which, oddly, was featured in another Kutcher rom-com: Valentine's Day).  Rather, Elizabeth Meriwether's script (with a story by Meriwether and Mike Samonek) went with the "father's life is in danger so we need a rush to the hospital" route.  Ivan Reitman is a good director, so I figure throughout No Strings Attached he was just slumming it and therefore, I won't go into how almost everyone here is unpleasant and how unfunny the situations are.

As much as one is suppose to root for these two to go together, one can't because they are so unlikable.  Portman's Emma is cold, almost inhuman in her indifference to matters of the heart (one wonders what her bedside manner would be).  How else to explain being so emotionally removed that she invites a guy to her own father's funeral without telling him (him wearing his school hoodie, thus standing out in his yellow to all the black, make her look even more cruel towards someone who appears genuinely interested in her).  Adam isn't all that better either: he allows Emma to think he's got a threesome going on without telling her that the two girls are really more into each other than into him (and of course, a little lesbo humor always elevates a film, doesn't it?)

In terms of unlikable characters, let's put Alvin at the top of the list.  It's really grotesque to think a father has such disregard for his son that he's willing to sleep with his son's ex-girlfriend.  Moreover, it doesn't appear to faze Alvin in the slightest that Adam may not take kindly to the idea that the woman who broke his heart could be his new stepmother.  Alvin, judging from the movie, is famous for a television show where he would say, "Great Scott!" at least once (I figure at the closing of an episode).  Frankly, I was puzzled as to how and why "Great Scott!" could ever have become an iconic punchline.  My mind started thinking the show Great Scott would have been a pretty lousy one, and I don't think that was the intent of No Strings Attached to have me wander mentally from the story presented.

Moreover, the bigger problem in No Strings Attached is that the film introduces certain plot points and characters just to drop them without giving any rhyme or reason to do so.  Certain characters, like Adam's juvenile friends Eli (Jake Johnson) and Wallace (Chris "Ludacris" Bridges), are seen at the beginning but leave pretty soon after they appear.  We have a subplot involving Eli and Patrice.   He starts as your typical Ashton Kutcher film friend (ie. an immature sex-crazed man-child).  By the end of No Strings Attached, he and Patrice are having a beautiful relationship, but we never see how that relationship flourished because we're too preoccupied with Emma and Adam's booty call marathon.

Take for another example Sam.  We're led to think that Adam, who doesn't have a good job or many prospects, will have to fight him for Emma, but pretty soon he disappears completely from the movie, only popping up in the end with Shira.  If you'll excuse the expression, throughout No Strings Attached there was simply no follow-through.

Even more bizarre, you have Cary Elwes as Dr. Metzner, whom I figure was the Head Doctor at the teaching hospital Emma is at.  Apparently, he's some sort of semi-divine personage at the hospital, one whom residents wouldn't approach casually.  However, Elwes not only doesn't do anything in No Strings Attached and his character doesn't add anything to the film, but in his bushy beard and hair, Elwes was so completely unrecognizable I didn't even know Elwes was in the film until I saw the credits and was stunned to see he got major billing.   It's astonishing to think No Strings Attached made Cary Elwes look like Bruce Vilanch.

Same goes for Tim Matheson (except he didn't look like Bruce Vilanch).  He pops out at the very end of No Strings Attached as one of Eli's "two dads".  Here again, another plot point introduced and never explored.

It seems so strange to have some good actors in such insignificant and useless parts.  Even worse, it's bad when you have Ashton Kutcher as your lead.  Kutcher, despite his years of on-the-job training in film work, has never mastered the art of creating a genuine emotional connection either to the character or the audience.  He is Always Kelso (I offer that as a title to his autobiography), a dim individual who uses his looks to get ahead.  Again and again, his facial expression never changes: he always looks genuinely surprised and pleased at himself for making millions of dollars by taking his clothes off.

Portman is another matter altogether.  Having come off a Best Actress Oscar win for Black Swan, she appears to not know how to make Emma remotely relatable.  Instead, her Emma is neither pleasant enough to have any redeeming qualities or human enough to care about anyone, even herself.  Why, given how she has never shown any interest or inclination to be around people (a misanthrope if ever there was one), does she suddenly despair at the thought of Adam with someone else?

Now, there are efforts to make Adam and Emma a bit human.  Adam's a writer (which I guess was shorthand for 'sensitive'), but given he still is a bit of Kelso-like goofiness/horniness, it doesn't work.  Emma doesn't have attachments, so it's a bit hard to make us like her.  Therefore, I was wrong in the first part of this paragraph.

Granted, there were a few times I laughed.  There were a couple of funny lines, such as when one of Adam's friends describes his ex dumping him for his father as "trading in an iPod for an 8-track".  However, it isn't enough to save No Strings Attached from being yet another abysmal attempt at a romantic comedy.

Truth be told, I think a better film would and could have been made out of the story of Eli and Patrice: one a wildly heterosexual man with two gay parents who slowly learns to love one woman, and the other a slightly ditzy girl who falls in love with someone so unlike her.  I'd like to see a movie about them, even their own spin-off series, rather than have to endure two people interested only in sex.  No Strings Attached might in the end be a reference to the character's brains connecting to anything else in their bodies.