The Devil's Double: A Review 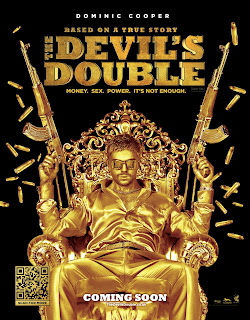 It is an interesting time in which The Devil's Double appears on the screen.  Throughout the Arab world, there are mass uprisings against the longtime dictators. So far, Tunisia, Egypt, and Libya have all decided to dump their rulers of twenty, thirty, and forty years respectively, and given the long-term self-appointed rulers of the respective countries (Ben Ali, Mubarak, and Gaddafi) notice that their services are no longer required or wanted.  At this writing, one of the last holdouts to power is Syria, where the Assad "monarchy" simply won't countenance leaving.

I bring all this up because it is a curious 'what-if' game one can play after watching The Devil's Double.  What if the U.S. hadn't invaded Iraq and overthrown the Hussein dynasty?  Would Iraqis have taken to the streets and demanded the ouster of Saddam Hussein and his equally brutal sons, Qusay and Uday?  Would the strongman of Baghdad, who would have been 74, been taken by surprise and fallen as quickly as Ben Ali?  I say that's doubtful.  Rather, I think it would have been like Bashir Assad's Syria: he would have unleashed all his firepower to crush the Arab Spring and shown the other tyrants how its done.  Granted, this is all speculation since Saddam and his two sons are dead and in Hell, but given how Uday Hussein was in The Devil's Double, the Iraqi Arab Spring would have been a bloody one.  The Devil's Double, the tale of Uday Hussein's body double, makes for fascinating viewing.

Latif Yahia bears a striking physical appearance to the son of Iraqi tyrant Saddam Hussein, Uday (Dominic Cooper in a dual role).  Uday needs a double, someone who can impersonate him, and he's chosen Latif (a former classmate).  Latif, a good man, doesn't want to do it, but in the scheme of things, he doesn't have much say in the matter.  With a little plastic surgery, Latif becomes Uday, much to the latter's delight and the former's agony.

Soon, Latif is immersed in a decadent world where women and drugs flow freely, where all of Uday's base desires and psychotic actions are witnessed by an unhappy Latif.  Uday thinks nothing of grabbing fourteen-year-old girls off the streets and raping them, of snorting cocaine right before meeting with Kuwaitis and then plotting to invade their country, of humiliating all the women in his harem.  Curiously, all except one: his favorite mistress, Sarrab (Ludivine Sagnier).  She appears the only one who has the power to calm his erratic behavior.  Latif wants desperately out, but cannot flee.

Eventually, after Latif himself begins a clandestine affair with Sarrab, Uday's grotesque behavior, including a horrific rape of a bride on her wedding day, overwhelms him and he strikes Uday.  When Latif refuses to kill the father of the raped girl (who died shortly after she was raped), Latif is sent to his parent's home, his parents having believed he had died in the Iran/Iraq War.  Shortly afterwards, he and Sarrab flee, but Latif learns that Uday's tentacles are not far behind.  In the end, it is Latif, along with disgruntled courtiers, who take matters in their own hands in dealing with Uday. 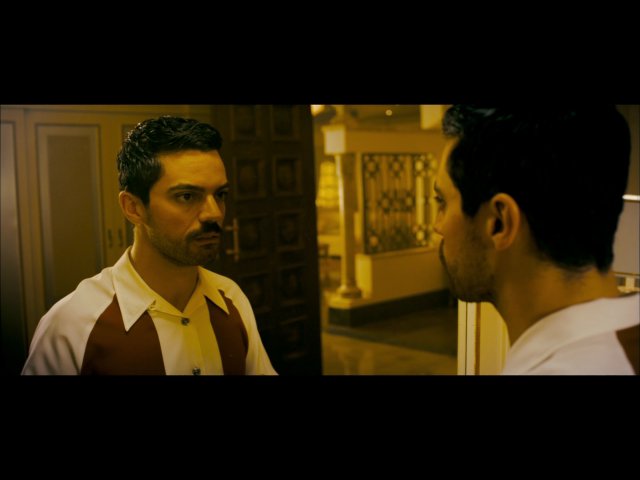 The Devil's Double has one of the best performances of the year in Dominic Cooper.  Cooper plays both Uday and Latif, and for the most part one doesn't notice the split screen that had to be used to get both of them in the frame.  What makes Cooper's performance so brilliant is that we never think of the same actor playing two parts.  Instead, we think of it as two different people.  This is aided invaluably in Lee Tamahori's directing of Cooper: when he's Uday, his voice is higher, more maniacally gleeful and brutal, his face expressing heightened paranoia.  Latif, conversely, is more controlled, more calm, even a bit more stern.

I digress to point out that when I left the theater, I overheard two women discuss the film, commenting on how handsome Latif was.  Curious, but they didn't say the same for Uday, even though it was the same person.  It is a tremendous credit to Cooper that he did both characters so well that few if any people noticed. The Devil's Double also benefits tremendously by accurate casting: with the exception of the British Cooper and the French Sagnier, almost all the other roles were played by Arabs or actors of Arab descent.  Sagnier showed Sarrab not as a typical tramp but as a woman who does what she can to survive.  In a smaller role, Raad Rawi as Uday's disapproving but frightened chief handler manages to show much without having to say or do much.  A glance is enough to communicate what he's really thinking one way or another.

As Saddam himself, Australian Phillip Quast makes the Iraqi dictator a calm but terrifying figure, willing to kill his own son for brutally butchering Kamel Hannah (Mem Ferda), one of Saddam's favorite courtiers and supplier of the dictator's mistress.

Michael Thomas' script, drawing from Yahia's own memoir, creates a Court of Hussein where brutality and decadence are in equal supply.  Side note: I got the sense that Uday loved the 80's, given how often we hear 80's music whenever he's at a club which curiously, looked like the same one.  I'll put this on the budget.  Yet I digress.

We don't get graphic depictions of Uday's brutality and sadistic behavior, but the suggestions the film gives us are enough to show what a despicable monster Uday was.  We mercifully don't see the rape of the teen, but get hints of what happened, leading up to a truly sad end for our schoolgirl.  The same for a horrifying act against a bride on her wedding day: nothing is really shown, but enough is understood to make it truly barbaric.  Again, it is to Thomas' credit that The Devil's Double stays close to the true story.

The one part that was rather graphic was when Sarrab and Latif finally give in to their passions.  Not only was there quite a lot of nudity, but it happened just as Operation Desert Storm begins.  There is something a bit grand about the two of them finally having sex while Baghdad burns, a bit too cinematic I thought.

I also wondered about Latif himself.  He's the subject of The Devil's Double but by and large he's still a bit of a mystery.  We know he is appalled by Uday's twisted behavior, we know he misses his family, we know he's basically a good guy who doesn't mind schtupping his overlord's favorite mistress.  Still, we have Latif a bit distant from us: we end The Devil's Double the way we began, not knowing Latif as a person.  Did he believe this was punishment from God?  Was he hopeful the Husseins would be overthrown or assassinated?  Was he ever in danger of being seduced to the dark side?

That, overall, is really a minor matter in the overall quality of The Devil's Double.  We get as close to an inside view of the depravity within the Hussein's Iraq as we will ever get outside a documentary (and as a side note, I would recommend the oddly comical yet frightening documentary Uncle Saddam) or a first-hand account.  The flaws within the film are balanced with a brilliant performance by Cooper as both the amoral dictator-in-waiting and his doppelganger.

Now, aren't you glad we overthrew Saddam and his sons?