I go into Fright Night without having seen the original film, and I think most people in the audience are so unfamiliar with the original that they probably weren't aware that this is a remake.  That being said, the remake (at least here they don't pretend that it's anything other than that) manages to have a good balance between horror and comedy, anchored by solid performances and some surprisingly exciting action scenes.

Charlie Brewster (Anton Yelchin) and his mother Jane (Toni Collette) live in a remarkably isolated neighborhood outside Las Vegas.  They have a new neighbor, Jerry (Colin Farrell), who keeps his windows covered up with the story that he needs to sleep in the day since he works nights and given Las Vegas, not an odd situation.

However, Charlie's former best friend Ed (Christopher Mintz-Plasse) is convinced that Jerry is really a vampire, responsible for their high school friends going missing.  Charlie, who has shifted from the nerd he once was into a cool guy complete with hot girlfriend Amy (Imogene Poots), wants nothing to do with either Ed or Ed's loony/nerdy ideas.  After Ed threatens to reveal the extent of Charlie's geeky past, he agrees to help Ed.

Soon, Ed's own disappearance and some investigating of his own convinces him that Jerry truly is the undead.  For help, he turns to magician and self-proclaimed vampire expert Peter Vincent (David Tennant).  Peter doesn't want to get involved, especially after surviving an attack himself.  Jerry, now determined to wipe out the Brewsters from revealing his secret, takes Amy and plans to make her part of his army.  Charlie is perfectly willing to face off against Jerry alone, but in the end Peter opts to face his own dark shadows for the ultimate battle.

Fright Night knows what it is: a horror film with many comedic elements.  Marti Nixon's screenplay, based on Tom Holland's original, doesn't for the most part shortchange one for the other.  For example, both Charlie and Peter mock the idea that a vampire is named "Jerry".

In fact, most of the comedy comes from Peter, a Chriss Angel-type magician with a Las Vegas show (side note: what little we're shown of Vincent's review, called Fright Night, doesn't really look like a good Vegas review, but I digress).   It recognizes that the situations are rather bizarre but it never takes them lightly.  What laughs come in Fright Night come through the situations rather than witty one-liners. 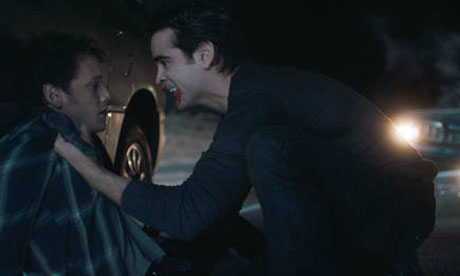 However, the fight scenes in Fright Night are surprisingly tense.  A good example of one is when the Brewsters and Amy are fleeing a pursuing Jerry, and this comes after he literally blasts them out of their home.  In the isolated road between their neighborhood Jerry is relentless in menacing the trio, and Craig Gillespie's directing build up the tension as to whether the three would survive (it's here that Chris Sarandon, star of the original Fright Night, pops up in a cameo.  Watch early in the film for a cameo by chanteuse Lisa Loeb).   There are also exciting fight scenes in Vincent's lavish penthouse/occult museum and the final confrontation between Jerry and Charlie.

A positive point in Fright Night is that the heroic characters are quite relate-able.  Anton Yelchin creates in Charlie a teen who embraces his new status as a cool guy but who still has a bit of nerd to him.  He is likable as Charlie, who quickly sees the danger all those he loves are in.  He has a wonderful scene at the hospital where he reproaches himself for what's happened to his former best friend and his mother that plays it pretty straight and reminds us that Yelchin is one of our better up-and-coming actors.

Granted, Yelchin does look at 22 a little old to play a teen, but that is a minor detail.  Tennant steals the film as the slightly drunk and addled Peter Vincent, who has his own fears to deal with.  Farrell plays the vampire Jerry with a good mix of menace and suave self-confidence, rarely being overtly monstrous but rather seducing his victims. Mintz-Plasse hasn't quite gotten over McLoving from Superbad but to his credit his final confrontation with his former BFF is still effective in being creepy and a bit funny too.  Poots' Amy is pretty but again, credit should be given in that when she has to fight, she does it well.

There are, however, some questions that are never answered in Fright Night.  The biggest one for me was how Ed and his friend Adam (Will Denton) realized or discovered that Jerry was a vampire.  Charlie sees the proof on Ed's computer, but I wondered how they came across to pinpoint Jerry as the undead.  We never got a reason for that, or how these high school students started disappearing without anyone really taking notice.

We also have to wonder how dumb Charlie can be when he meets Amy after Jerry has taken her.  There could have been more interplay between Jerry and Charlie and allowed his suspicions to grow as to who Jerry truly was instead of everything moving so quickly.

However, on the whole these points except for the first one which did make me wonder how Jerry's secret came to be discovered, don't undermine what Fright Night is: a film that has elements of horror along with moments where we can laugh a bit too.  On the whole, Fright Night is not a frightening film but not one that is spoofing the scenario.  Rather, it has an equilibrium between being able to laugh at the situation and being aware the situations are dangerous.

As always, I opted to watch in 2-D and there were some moments when it was obvious they were trying to put in things just to justify having 3-D.  I didn't think they added to much but mercifully they weren't distracting enough to get on my nerves.  As in most films, there isn't enough to make Fright Night a 3-D movie and I think it works better without this Satanic gimmick.

Still, Fright Night has enough entertainment and excitement within it to make it a good film to bite into.