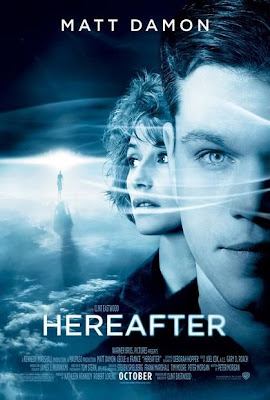 As odd as it may sound, for a film about death, Hereafter is rather depressing, and slow, and boring.  When one explores the idea of life after death, you come at it from two views: it is real or it is not.  Hereafter decides that there is something 'out there', but doesn't provide any evidence for it.

Hereafter ties three stories which I've dubbed 'London', 'Paris', and 'San Francisco'.  We start with Paris (which I should technically call Thailand, but most that storyline takes place in Paris).  Journalist Marie (Cecile de France) is vacationing in Thailand with her lover.  While shopping for gifts for his children, she happens to find herself in the Tsunami of 2004.  She dies for a moment, and in that time she experiences a strange vision: a white light with people all around, including a girl she tried to rescue.

Shift to San Francisco.  There is George Lonegan (Matt Damon), a working-class dock worker who has the power to communicate with the dead.  This ability once made him famous but it became too much for him, so he turned his back on his powers and has become a bit of a recluse.  His brother Billy (Jay Mohr) has persuaded him to give a reading to an important client of his.  With a touch, George is able to see 'the other side' and the dead can speak through him.  George hates this ability, and it cripples him emotionally.

Now to London.  Twins Marcus and Jason (Frankie & George McLaren) live with their drug and alcohol-addicted mother Jackie (Lyndsey Marshal), but despite this they love her deeply.  Both are thrilled when she finally takes steps to get self-treatment for her addictions, but after getting her medication Jason is harassed by hooligans for the medicine and his mobile (cellular) phone.  As he tries to flee, he is hit by a van and dies. 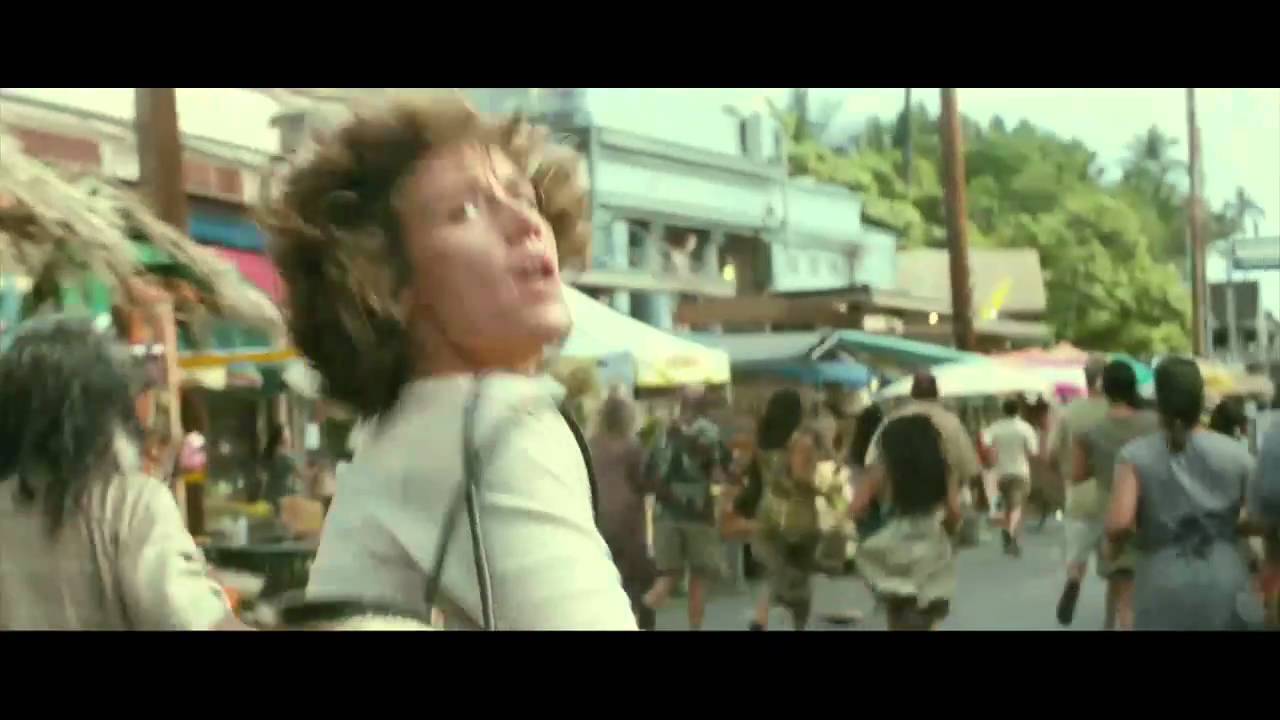 Paris is naturally traumatized by her near-death experience.  She decides there is a story here yet to be explored, so in her leave of absence from her job as a top journalist (the Diane Sawyer of France I figure), she decides to investigate the hereafter.  San Francisco just wants to live as normal a life as possible, taking night courses and hesitantly starting a romance with fellow student Melanie (Bryce Dallas Howard) before being talked by Billy into starting up his readings.  London mopes through life, losing his brother and his mother through her rehab, wearing Jason's baseball cap and consulting all sorts of quacks to try to contact his dead brother.  Ultimately, London is saved from the London bombings of 2005.

Each story has a terrible tragedy within it and Peter Morgan's script will eventually tie all these stories together (it wouldn't make sense to introduce them and not have them connect somehow).  I found that Hereafter reminds me of a funeral: the tone is reverential, quiet, somber, joyless and filled with a vague hope of "a better world beyond".  Death is a serious matter, a situation where sadness takes hold.


However, Hereafter does nothing to bring comfort or a sense of hope.  It asks questions about mortality but while offering a vague answer (there is something out there where all people exist and can communicate with us) the film doesn't give the viewer any sense that this is a good thing.  We all die, Hereafter appears to say, but we exist in a vague shadow existence.

Curious that I keep using the word "vague" to describe Hereafter.  I think this has to do with the fact that the film doesn't want to take a firm stand on the issue of the afterlife: it doesn't describe life after death as the traditional view of Heaven but instead gives us some 'mystical' view of the afterlife.  It's a bit like the ancient Greek view of Hades: the dead wandering about, conscious of who they are but really having nothing to do, nowhere to go, and no hope of things getting better.

Here's where Hereafter goes wrong.  The entire premise of the film is insulting to both believers and non-believers.  For those that don't believe, the mere idea that there is an afterlife is anathema: once you die, you die.  That's it.  Game over.  You are food for worms.  As Melanie's lover Didier (Thierry Neuvic) tells her, the light goes out.

For those that do believe, it is blasphemy to contact the dead.  Spiritualism would be rejected in every way by Judaism, Christianity, and Islam.  Therefore, while all faiths may adhere to the belief in an afterlife, they certainly wouldn't go about trying to reach those in the great beyond, and certainly not by psychics and spiritualists.  With that in mind, the entire idea of George being correct, of someone being able to contact with the dead, is likewise anathema.

In a curious side note, the times there is some sort of take on death by a religious figure, it shows that faith-based views of death are wholly unsatisfying; the minister at Jason's funeral appears himself to not believe himself in an afterlife, rushing through the service to accommodate a Sikh funeral (which makes me think the British really are slipping back to some sort of paganism, but I digress).  When Marcus goes on YouTube to listen to Islamic and Christian views of the afterlife, neither give him comfort, with the former appearing to frighten him.


It's to Clint Eastwood's credit as a director that he is willing to tackle such heady (and heavy) subject matter.  However, it's unfortunate that it opted for a more mystical take on the subject, of this idea that we do live on, but in some sort of shadow-world, one with no hope, no sense of purpose or justice; if everyone who dies goes into this shadow-world, then Adolph Hitler and Anne Frank are sharing the same space. I figure Rob Bell would believe Hereafter is accurate since it subscribes to his view of life after death, but again I digress.

One thing that really sunk the movie was the ending: having Paris and San Francisco get together (and suggesting via a 'vision' that there will be a romance between them) is so out of left field that it rings false.  It is almost like having to say we have to end with a version of a positive note.  It also suggests that George is not only a medium, but can see the future, which we haven't had suggested before.

Another digression: George Lonegan can see and hear from someone's dead relatives just by merely touching them, and all I could think of was that having sex for him must have been a nightmare; since sex involves touching someone all over, he wouldn't have enjoyed sex since he would be surrounded by dead people.  Granted, I'm being facetious, but if just by touching someone brings the dead to him, just imagine when he's rolling his hands all over someone.

As befits the subject matter, almost all the performances in Hereafter are somber and morose.  Damon was unconvincing as George, perpetually whining about his 'curse', always protesting he won't do any readings but somehow always getting talked into them.  The psychic doth protest too much, I thought.

De France was also serious as the journalist who wants to be hard-headed and realistic but who begins to wonder if there is something 'out there'.  The McLaren boys are appropriately depressing as twins who lose each other to death, but whom cannot be separated by it.

Now, the opening with the tsunami was quite well done and frighteningly realistic, but once we get over the shock of that tragedy and plunge into our story of the vagueness of postmortem existence (no pun intended), Hereafter becomes a heavy, downbeat, and dull experience.

The film appears to say, don't worry: there is life after death, but it's really an unhappy existence. Most people think of life after death in hopeful terms, of knowing that we will meet those we love again. Hereafter offers a different view: not only is life meaningless and absurd, but so is life after death.  There is a nihilism in Hereafter, a somberness in it that makes watching the whole thing less a meditation of what could or is out there in the great beyond and more a case for neither living or dying.

Hereafter instead is a rather hopeless film: one that says nothing about what is attempting to address.  There is no hope despite saying that we go on after we die. In knowing that no matter where we are, we will all eventually meet and connect with the dead, Hereafter is Crash For Dead People.