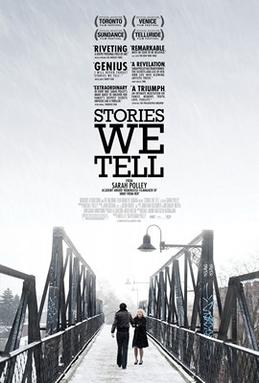 Sarah Polley wants us to think that Stories We Tell is something akin to Rashomon, where we get to hear 'the truth' but find that 'the truth' is buried under the teller's own interpretation, prejudices, and motives.  What I found in Stories We Tell is not so much an exploration of what 'truth' in any particular story is, but more about one woman's need to call attention to herself, even if by doing so she tells all of us that she is basically a bastard, her mother an adulteress, and her father clueless.

Polley, an Oscar nominee for her screenplay adaptation of Away From Her, gets her family and her late mother Diane's friends and fellow actors to tell their stories.  There was always this joke in the Polley home that Sarah did not look like her father, Michael.  Everyone, including Michael and Sarah, thought this was all terribly amusing.  However, long after Diane's early death from cancer, certain ideas started forming.  Sarah was conceived when her mother was in her forties, after Diane, a former celebrated Canadian actress, briefly returned to the stage in Montreal in a play called Toronto.

Side note: I found it odd that Toronto debuted in Montreal, but there it is.

In any case, while there Diane is not alone.  Still popular and strikingly beautiful, she catches several men's eyes.  Michael also goes to Montreal and there the Polleys rekindle their passion, out from which Sarah, the youngest of their children, was born.

Another curious detail is that Diane was close to having an abortion, raising the question why this particular child would be aborted.  Was it, as the official story maintained, the fact that Diane was in her forties and feared Down's Syndrome?  Or could it be something more, say, hiding proof of an affair?

﻿
As Sarah starts plunging into Diane's past, the men who could be her father, and her siblings (full and half from Diane's first marriage), we discover A truth, along with how Sarah, her brothers and sisters, and her two dads all see that perhaps THE truth is a bit more obscure and confused than we are willing or able to admit.

Using both Polley family home movies and reenactments, Stories We Tell gives us a portrait of a family whose final member finds out who she is and how that truth affects all those who Diane tied into her bloodline.
﻿﻿﻿
I could never shake the idea that somehow, Stories We Tell was almost narcissistic, a way of showcasing the rather 'scandalous' beginning of her life.   As Polley explored and exposed her mother's life, she never once asked what DIANE would have wanted or what DIANE would have thought of all this.  Would Mrs. Polley have wanted her indiscretions (and I mean in the plural, when we get a last-minute surprise) not just exposed but used as a plot device or worse, promotion for her daughter?

I'll grant that perhaps my discomfort with all this lies in that I have a certain view on such matters.  I'd be appalled if people (and for the matter, if I) discovered that I was not my father's child but the result of an extramarital affair.  Instead of wanting people to know it, I might hire hitmen to take care of anyone who did know about it.  Illegitimacy, at least to me, is something to hide, not something to parade.  That, however, is up to the individual.  What I do find more disturbing is that for all the introspection Polley proclaims, Stories We Tell never once has Sarah Polley ask if her mother, now long dead, would have wanted her secrets exposed.

As we go with all the tales of Diane Polley, her daughter calmly directs her family, her mother's friends and acquaintances and the people recreating her parent's pre-Sarah lives with what I thought was a somewhat remote manner, as if the revelations and connections were somehow not real or worse, unimportant to the individual.  Instead, they were important only insofar as they revolved around Sarah.

Now, while I found Stories We Tell close to an exercise in self-absorption, this isn't to say the explorations of individuals memories within the film don't have interesting results.  Harry Gulkin, the man revealed to be Sarah's biological father, vividly remembers Michael at Diane's funeral, while Michael Polley didn't recall Harry being there at all.  Harry, having carried both a torch for Diane and this secret, would focus on the man the love of his life would not leave him for.  Michael, in mourning for the woman he loved and lost, would not focus on a minor figure in his late wife's life.

Here, we see that memory, particularly what the individual focuses on or what is important to him/her, differs from one person to another.  Memory is a curious thing: what one holds in his/her mind may be seared with one, but be insignificant to someone else.  Harry made an interesting and accurate comment.  "There are particular reactions to certain events.  Not that there are different truths."   Deep words to ponder.

Stories We Tell has something within it that is good: the idea that memories may be reflections of truth but not absolute truth in and of themselves.  However, Sarah Polley's focus on her own story (and the unanswered question of 'what would Diane think?') push the story to be almost a little bit boring.  As she spools her scandalous beginning, I confess I nodded off for a bit.

Too much navel-gazing can be too much to take, no matter how shocking the truth is.