The Big Wedding: A Review 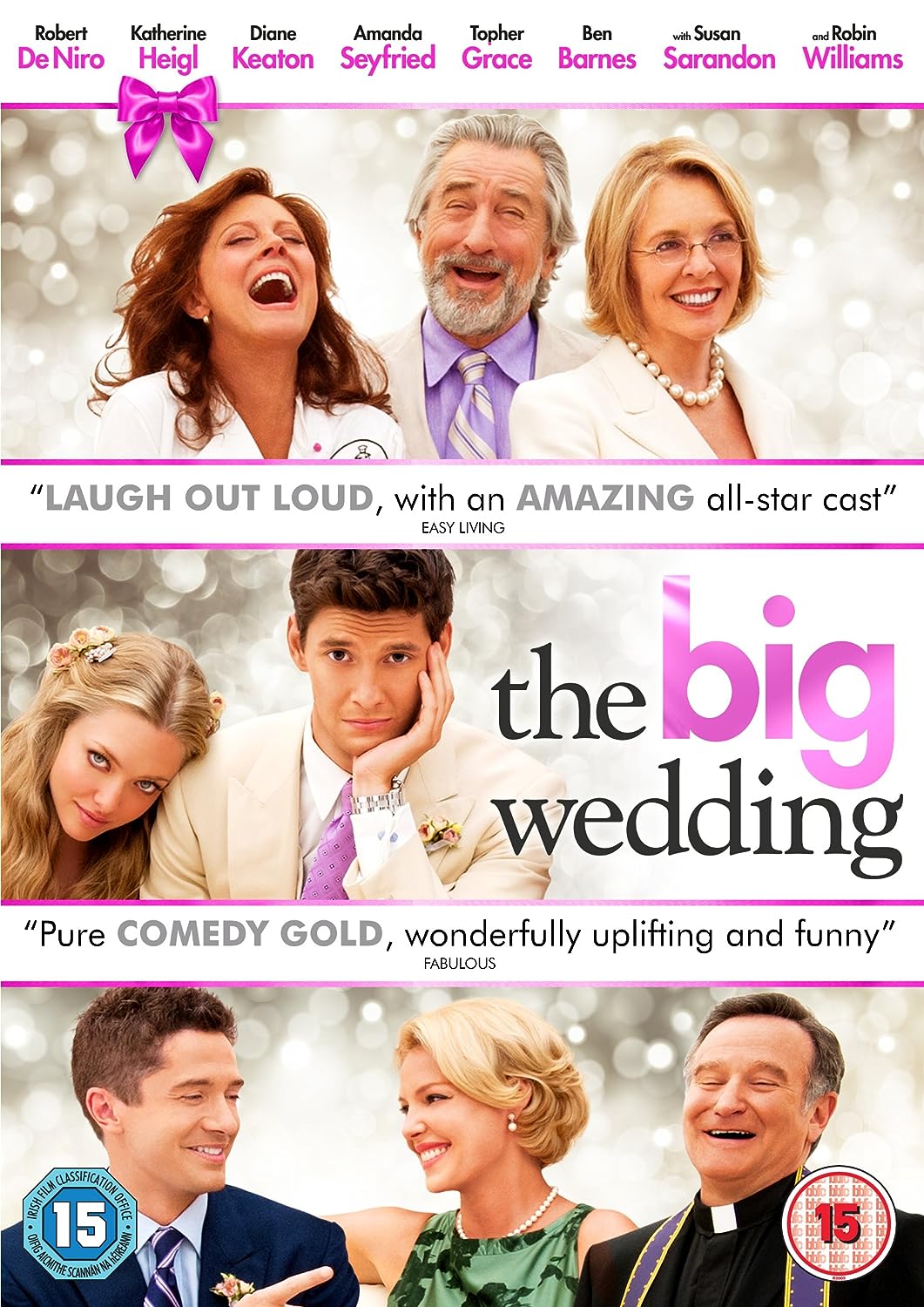 The stories are all true: The Big Wedding is among the worst movies ever made.  We are not just talking about 2013 (though all things being fair, it gives After Earth a strong run for its money as the worst film of 2013).  We are talking about ALL TIME.  Seriously, one cannot prepare him/herself for the sheer awfulness of The Big Wedding, a horrendous film that hits the trifecta of bigotry: it's sexist, racist, and homophobic, and even throws in anti-Catholic to boot.  Worse, it just is not funny.  The Big Wedding is a film that is simply so awful that it would not be worth watching even if every other film ever made were destroyed and The Big Wedding were the last film left in existence.

Don (Robert DeNiro) and Ellie (Diane Keaton) have been divorced for many years.  Before their divorce they had three children: eldest daughter Lyla (Katherine Heigl), son Jared (Topher Grace), and their adopted son from Colombia, Alejandro (Ben Barnes, who happens to be British, with no known Hispanic connections I should add).  Don has shacked up with Ellie's best friend Bebe (Susan Sarandon), but has steadfastly refused to marry her.

Speaking of marriage, Alejandro...from Colombia...is engaged to Missy (Amanda Seyfried), the WASP of All WASPS.  Her parents Muffin and Barry O'Connor (Christine Ebersole and David Rasche) are not happy that their little girl is going to marry this 'ethnic' who will give them mixed-brown children.  Still, things could be worse: like Lyla separating from her husband and her doctor brother Jared still a 29-year-old virgin waiting for his 'one true love' (and having all the female staff in heat).

Well, Father Monighan (Robin Williams) is not pleased that these two may not raise their kids in The One True Faith, but there are other problems.  Alejandro...from Colombia...has maintained contact with his birth mother, Madonna (Patricia Rae) and the devoutly Catholic Mamma would not approve of his adoptive parents' divorce or a couple living in sin.  Therefore, Alejandro...from Colombia...asks everyone to pretend Don and Ellie are still married to please this woman.

And like all rational adults, they not only agree but don't object much when this means two people who don't like each other very much to sleep together and throw out the woman who raised him.  Hilarity ensues.

Mamma arrives for the wedding, with her daughter Nuria (Ana Ayora), who like all Latin women is eager to get laid.  Guess who she sets her eyes on?

On that fateful weekend, we find out secrets, who loves whom, and all end well...well, it actually just ends, so that is about the only good thing in The Big Wedding.

﻿﻿
There is ugly, and then there is The Big Wedding ugly.  I don't think a movie could have been crafted any worse than this, a film that plays on the worst aspects of each actor's worst tendencies.  There's DeNiro's mugging for the camera, Keaton's flummoxed mannerisms, Williams' syrupy comic relief.  Even the secondary characters fall into bad forms: Heigl and Seyfried should handle second-rate rom-com, but even they appear lost or worse, irrelevant to the story.

Whole aspect of writer/director Justin Zackham's screenplay appear for no reason and disappear for no reason.  The O'Connor family under investigation for fraud?  While we expect everyone save Madonna and Nuria to know, it's mentioned but nothing comes from it.  It serves no purpose except for Missy to yell at them.  The idea that the O'Connors are bigots is enhanced by simple bouts of idiocy.  Muffin (already a stupid name) comments about how disappointed they were that Alejandro and Missy weren't going to Venice for their honeymoon, especially since according to Muffin, "Venice is Alejandro's native language."  Maybe Zackham thought it sounded funny, but man is that just one of the awful lines and situations in the film.

I also have heard of the Madonna/Whore Complex, but this may be the first time someone has literally tried to show it with a puritanical character named Madonna and a spicy Latina who strips off and skinny dips within minutes of meeting the virgin (whose reasons for remaining so are so vague they exist only for plot).  Here, we see another simply ugly aspect of The Big Wedding: the sheer bigotry within it.

You have the stereotype of the hot Latin woman who only wants sex.  Nuria is perfectly at ease giving Jared a handjob at the Rehearsal Dinner.  I know that's how MY Mexican mother got my father.  I cannot express just how ugly that was (though nowhere near as evil as having a BRITISH guy play a Columbian.  Seriously, they could have at least gotten someone like Freddie Prinze, Jr.: at least he part Puerto Rican.  Hiring a European play a Hispanic when there are good Hispanic actors, even for something as overtly lousy as The Big Wedding is another slap in the face of all Hispanics).

Let's just wrap all this up.  All the performances are awful bar none.  The story is hopelessly predictable.  We never get to know even these broad caricatures of rich people.  Their motivations and actions are nonsensical (Don and Ellie do have sex, but the repercussions of all this are never answered, we learn Ellie had an affair with Barry and Muffin goes for muffins...if you catch my drift).  The music sounds like something out of a bad sitcom (which The Big Wedding basically plays as) and honestly, why would these three adults placate their spoiled and selfish son in this manner?  If I had an adopted son whose birth mother did not approve of my divorce and new relationship, I'd say, 'tough cookies'.  Grow up, get a pair, not 'yes, son, of course I'll play along with someone I'll never see again to please her old-world ideas'.

More than anything, the casting of BRITISH Ben Barnes as a Columbian (even with his tan and hints of an accent) should indicate that The Big Wedding has nothing but contempt for its audience.  Allow me to share some of my notes while watching:

Bigoted, insulting to intelligence, awful.
Insulting to Catholics (I was angry, and I'm not Catholic)
This is all truly atrocious and feels longer than its 90 minutes running time.
HORRIBLE MOVIE...WORST THAN IMAGINABLE

The Big Wedding is simply a gigantic pile of crap that comes in a very pretty package, but don't be fooled.  Even at 90 minutes life is simply too short to suffer through this monstrous garbage.  I never hated a movie after watching as much as The Big Wedding.


ANY film that makes one almost WANT to watch After Earth again is a film that will live in infamy.