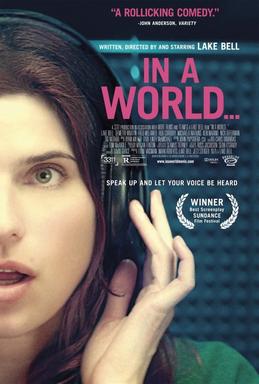 We all strive to reach the best.  For film reviewers, we aspire to be thought of in the same way Roger Ebert was.  Granted, by now it is highly unlikely any reviewer will earn that notoriety but we all stand in his shadow.  In the world of voice-over announcers, the aspiration is Don La Fontaine, the man whose voice introduced all sorts of films, popularizing the term "In a world..." and became more famous than some of the films he announced.  Lake Bell takes this term and from it springs a film that is more than just a spoof of voice-over artists.  In A World... is a wry comedy that is about the struggles of career and families as they conflict and sometimes come together.

Carol Solomon (writer/director Lake Bell) is slightly adrift.  She struggles as a voice coach specializing in accents.  Her big dream is to do voiceover work for trailers.  However, her gender is a big enough hindrance in the male-dominated industry where deep baritones rule, but she has the added burden of being the daughter of legendary voiceover artist Sam Soto (Fred Melamed).  Sam, like many in the industry, doesn't think a woman will be successful as a trailer voiceover artist, and more to the point, needs her to move to make room for his new girlfriend, Jamie (Alexandra Holden), who is if not exactly Carol's age within the range.

Carol has no choice but to crash at the home of her sister Dani (Michaela Watkins) and her husband Moe (Rob Corddry).  Things do not appear to go her way until while helping Eva Longoria sound Cockney, her father's protégé Gustav Warner (Ken Marino) is ill with laryngitis and cannot make a voiceover for a child romantic comedy called Welcome to the Jungle Gym.  With nothing to lose, Carol, encouraged by her soundman/platonic friend Louis (Demetri Martin) makes a test.  To everyone's surprise she gets the gig.  This leads to a string of gigs and her stock is rising.

Unaware of Carol's rapid ascendancy, both Sam and Gustav are both dismissive and angry about 'the girl' who 'stole' their jobs.  Despite not being enthusiastic about being with Jamie the girls agree to go to a party at Gustav's swanky digs.  Louis, who stumbles in his efforts to both hide and show his interest in Carol, reluctantly agrees to take Nancy (Stephanie Allynne), the office oddball/slut.  While Louis has to take Nancy home (where he is relieved to not have slept with her), Carol and Gustav (unaware of who she is) do sleep together.

Now comes a really big deal in the trailer voiceover world.  The oft-used phrase, 'in a world...' is going to be used again in a major campaign for an epic 'quadrenology' (a trilogy in four parts), an adaptation of a Young Adult dystopian series called The Amazon Games.  Gustav wants that gig.  Carol wants that gig.  Sam, who had at first removed himself for consideration to make room for his protégé Gustav, discovers that both Carol is 'the girl' who is suddenly making waves in the industry AND the girl Gustav banged and bragged about.  He now decides he will go after a chance to utter La Fontaine's signature line.  They have to all make tapes, infuriating the legendary Sam and worrying Carol who has little time to prepare.  Still, with Louis' help, with whom she has started a gentle romance, she makes her audition tape.

Everything comes to a head at the Golden Trailer Awards.  Sam will receive a Lifetime Achievement Award with an introduction by Gustav, and while the girls don't want to go, Moe (who has recently reconciled with Dani after her flirtations with a hot Irishman) insists they go.  In a surprise, the new trailer for The Amazon Games (and the voice) is revealed.  Despite Carol's triumph and both Gustav and Sam's disappointment, Carol sees she was used, and we end with both Carol still working with voices, now to help women sound better, and with Louis a firm part of her life.

One of the most pleasant aspects of In A World... is that despite everything, we end up liking everyone.  No one is overtly evil or a clear antagonist.  Even the 'villains' like Sam or Gustav are actually endearing people within their flaws.  Gustav, for example, when approaching Carol comments that he knows he has a 'face for radio', and given that Marino is quite a good-looking man (and knows it), his odd view of himself, coupled with a sincere insecurity over losing jobs to someone else, makes one like him.  Same for Sam, who faces the end of his career and who has a job of reaching out to the daughters he has alienated himself from.  Even in the quasi-adultery Dani commits (understandably, given it's Jason O'Mara who catches her eye and vice-versa) we see people who are human, who make mistakes and are genuinely repentant for their mistakes.  If anything, the fact that there is forgiveness makes them instantly pleasant people.

Melamed is also wonderful as the flawed, egoistic yet ultimately wounded Sam.  In his hurt at losing the gig to A.) a woman, and B.) the daughter he pushed away in favor of his new wife and protégé, we see that he isn't as invulnerable as he'd like to be.  Still, we end up liking him.  In fact, we end up liking everyone. Another aspect that makes In A World... a treat is in the genuinely sweet romance blossoming between Louis and Carol.  As portrayed by Martin and Bell, they are again, genuinely sweet and endearing people, bumbling into a romance where both have to break through their own inhibitions and timidity to reach out into a beautiful romance.  I was especially impressed by Martin, who brings such a hesitant insecurity to Louis, making him almost innocent.  Yet it is he who pushes Carol to pursue The Amazon Games voiceover, making him the source of strength and encouragement Carol needs.

Bell is equally delightful as Carol.  She doesn't make her an insecure, neurotic woman (though she has her moments).  Instead, Carol is someone who wants to rise above her position, something especially difficult given she has the double burden of being both a woman AND the daughter of a legend.  In her own way, Bell makes a clever commentary on the position of women in Hollywood, not just in the male-dominated world of trailer voiceovers (note that she had to lower her voice in The Amazon Games trailer to be more 'authoritative') but in Hollywood in general.  Despite the progress women have made in many industries and positions of power, there is still a dearth of women in positions of power in the entertainment industry.  There are few women writing for comedy, few women directors, and few women in the business office (examples like Sherry Lansing, Kathryn Bigelow and Shonda Rhimes being few and far between).  The recent brouhaha over the lack of African-American female cast members on Saturday Night Live (and I imagine on the writing staff) serves notice that the subtle commentary Bell offers with In A World... still has bite.

There are a few things left unanswered.  Whatever happened to Nancy?  The 'affair' between Dani and the Irishman (and the flirtation between Moe and the hot British neighbor) is a bit sitcom-like.  However, these are few flaws.

The film is a wry, amusing comedy, not one that has you laughing on the floor but one that makes you break out into smiles at the odd world of its occupants (seeing Gustav make out with Carol's nose is funny) and you end up liking these characters.  There are moments of sweetness (Louis and Carol's long karaoke date) and wit (Welcome to the Jungle Gym...can't wait to see that movie) and cleverness (the whole trailer and especially the tag line for The Amazon Games, "It's A Broad New World"...love it) along with some unexpected and pleasant cameos (watch for Geena Davis and Cameron Diaz in small roles) make In A World... a great world to be in.