The Mouse And The Monster...

For the longest time I had heard of a children's book author who hated children.  I could never truly remember who that author was, but now it has been seared into my memory: one Pamela Lyndon Travers, author of the Mary Poppins books.   Well, let me walk that back a bit: I can't say that P.L. Travers hated children.  However, there is much evidence that she was difficult, cantankerous, harsh, generally unpleasant and a nightmare to be around.  Given she created a nanny we all know and love, it is so odd that something so delightful emerged from someone so bitter.

Saving Mr. Banks is the story of how P.L. Travers eventually consented to have Mary Poppins adapted by the Walt Disney Company to the film we all know today.  Those who had already seen The Boys: The Sherman Brothers' Story, knew a bit of the tale (Robert, the older and more somber of the two, referred to her nearly fifty years later as 'a witch', though one imagines he was really suggesting something stronger, and even his more upbeat brother Richard bemoaned the nightmare she was).  Saving Mr. Banks is part backstage story, part psychological exploration, and on the whole well-crafted (despite really holding more than what perhaps it aspires to).

P.L. Travers (Emma Thompson) is not having the best time of things.  Sales of her Mary Poppins books have dried up.  She has refused to write more Mary Poppins stories, and as result, she is running low on money.  With the greatest reluctance she is cajoled to entertain the idea of selling the film rights to the Disney Company, which has been pursuing them for twenty years.  Travers is appalled at the idea of HER creation being turned into some sort of cartoon, but things being the way they are, she goes to sickeningly-sunny Los Angeles.

She dislikes every single thing that meets her cold, unmoving gaze: the gifts left in her hotel room, the driver (Paul Giamatti) who attempts a familiarity she frowns on, the Sherman Brothers, Richard and Robert (Jason Schwartzman and B.J. Novak), the songwriting duo who will turn Mary Poppins into a musical (a silly idea given that Travers tells them the material does not lend itself to song), culminating with a meeting with Walt Disney himself (Tom Hanks).   Instantly their styles clash: the highly avuncular and informal Disney (who wanted everyone to call him 'Walt' or 'Uncle Walt') versus the strict and persnickety Travers (who snapped at anyone who called her anything other than 'Mrs. Travers' with the exception of the more powerful Disney, though she let him know she preferred 'Mrs. Travers').

And all this, mind you, while Travers STILL has not fully consented to sell the film rights!

As time goes on, Mrs. Travers is forced to face her memories that created Mary Poppins, in particular going back to her childhood in Australia.  Here, she remembers her father, Travers Goff (Colin Farrell), whom she loved but who was also a serious alcoholic who succumbed to tuberculosis at a young age.  Soon her life story and the film story start blending to her, and while by the end we do see a glimmer of a touch of humanity to P.L. Travers, she still won't budge. It takes all of Disney's patience and charm (even a forced trip to Disneyland, or his 'dollar printing machine' as she flat-out tells him over the phone) to get her to sign, and then a rush to get the film made.

At first, Travers was not invited to the premiere (working with her being such a nightmare Disney just wanted to avoid it all).  However, with characteristic aplomb she returns to California and invites herself, to where she is in turns displeased and delighted with Mary Poppins.

There really is no gentle way of putting it: the P.L. Travers in Saving Mr. Banks is basically a...witch (though a stronger term would be more accurate).   Prickly, rude, dismissive of any attempts at being polite, excessively formal and deliberately difficult, Travers is in many ways a horrid woman that you'd like to flat-out punch if only to get her to show a hint of human emotion.  Still, by the end through various flashbacks to her Aussie past we see that she is also a wounded soul who has locked herself so tight that she cannot emerge from the prison of her own making.

As portrayed by Thompson, we see that as harsh and spiteful that she can be, she also has something within her that can also melt.  The slow thawing she shows when she first starts tapping her feet to Let's Go Fly A Kite, then to full-on waltzing and singing along with the brothers she has been berating, belittling, and tormenting with objections to everything they do is a delight to see.  However, we knew it was too good to last.

If more than anything, Saving Mr. Banks is not so much the story behind the making of Mary Poppins, but more about how P.L. Travers came to some sort or peace with how all the bits of her memories, beautiful and painful, shaped not just the characters she created, but her as well.  Over the course of her time working with Disney, Travers ends up remembering the joy and pain her father brought to her youth.

Perhaps this is the one aspect that I found not so much disturbing but a bit puzzling about Kelly Marcel and Sue Smith's screenplay.  Saving Mr. Banks is really TWO films: the creation of Mary Poppins (the books) and the creation of Mary Poppins (the film).  Saving Mr. Banks goes back to Travers' childhood in Australia again and again, to where one would wonder whether the film could have concentrated on her reflections on the characters and their genesis BEFORE going to California.   Flashbacks make sense when she recalls how the story and her life start bleeding into each other (a particularly effective sequence is when the character of Mr. Banks and a song for him blends into her memories of her father, a failed Australian bank manager.  The real Mr. Travers Goff---Pamela having taken his first name for her own surname--soon starts somehow speaking the lyrics to the song and all the memories soon overwhelm her into another fit of fury no one outside of her can understand).

If perhaps these flashbacks were fewer, the film could have run shorter (at a little over two hours, it feels longer) and been tighter.  While the constant flashbacks (which to me just seemed to make two stories in one film) was a big thing about the film that got to me, there were other aspects that I don't think worked as well as they could have. 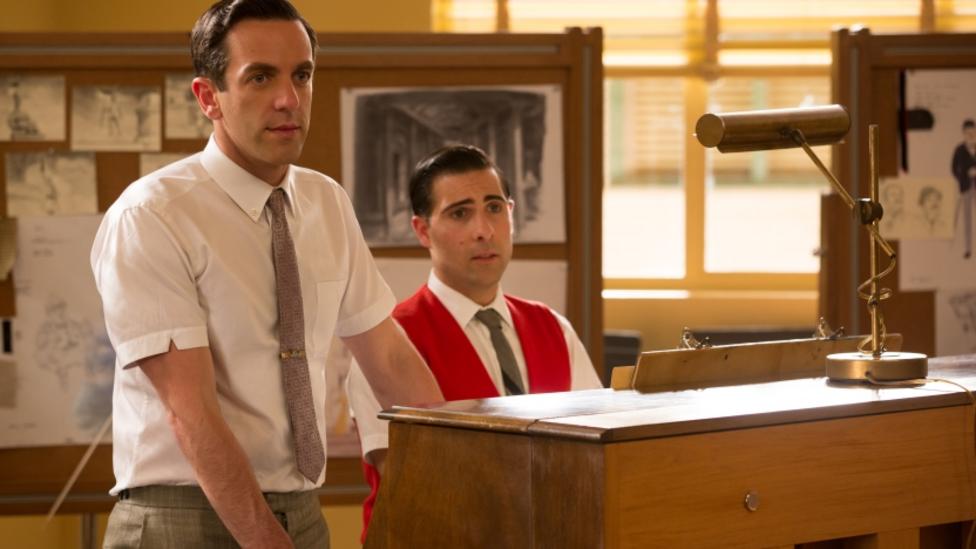 As good as Hanks is as an actor to my mind, my ears, and my eyes, he neither looked nor sounded anything like Uncle Walt.  He sounded and looked like Tom Hanks.  Nothing wrong with that, but I never fully accepted that Hanks WAS Walt Disney (though by the end, he has a beautiful moment when describing his harsh early years in Kansas City that shows Hanks can still do great work).   I also found it curious that Feed The Birds, one of Walt's favorite songs and one he requested often, was given only a brief moment, the emotion it stirred within in barely touched on.

However, these are really minor quibbles.  The rest of the cast was wonderful, in particular Schwartzman and Novak as the Sherman Brothers, Dick's more upbeat, easygoing, even innocent manner versus Bob's more confrontational style.  Giamatti was also excellent when he worked with "Mrs.", his almost naïve manner doing what Walt and his minions could not do: earn her approval.  When she realizes she never learned the driver's name, 'Ralph' tells her how her book really moved him and his handicapped daughter.  She offers to sign it, writing that he was 'the only American she liked', and then passes a note to him of people who overcame difficulties as a sign of hope to his daughter.  When he asks if he can know why he was the only American she liked, she responds with a firm, "No".

Saving Mr. Banks, like the medicine, has to be taken with a load full of sugar.  It doesn't cover how after Mary Poppins, Travers was still stubbornly cantankerous and bitter towards the film and Disney himself (those damn penguins being a chief complaint).  She would never sell the film rights to any other Mary Poppins stories, and when a stage musical version to the film was proposed, she consented with the proviso that no Americans (especially anyone involved with the film, a clear slap at the Sherman Brothers who were very much alive) be permitted to work on it at all.  To her bitter end in 1996 P.L. Travers remained simply a horrid woman.  However, this IS a Disney film, and there is no such thing as an unhappy ending in a Disney movie...even if a central character appeared to do nothing but spread unhappiness like an East wind.

However, give the Devil her due...she WAS right about Dick Van Dyke.  To this day I find watching Mary Poppins such a nightmare because his big grinning face and laughable Cockney accent grate my nerves.   Even that wretched woman P.L. Travers could be right where Uncle Walt was wrong.