The Mortal Instruments: City of Bones. A Review 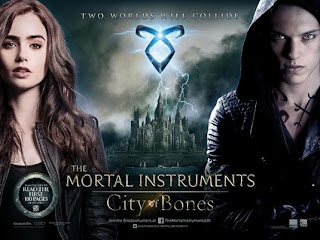 THE MORTAL INSTRUMENTS:
CITY OF BONES

You'll Rune the Day You Watch This...

When I was in middle school, I read such books as Gone With the Wind, Murder on the Orient Express, To Kill a Mockingbird, Bridge to Terabithia, A Day No Pigs Would Die,  Jacob Have I Loved,  Johnny Tremain,  and The Lion, The Witch, and The Wardrobe.  Looking over the tween/young adult reading catalog, I see such things as Twilight, Beautiful Creatures, and The Mortal Instruments, which to me indicates yet another Sign of The End of Western Civilization.

These titles are very similar: romantic angst buried within supernatural elements that can't be told in one volume.  No, they have to be a series (or in Twilight's case, A SAGA), where there is an effort to expand things to this grand mythology.  There are a whole group of these types of books, with only the Harry Potter and The Hunger Games novels emerging to respectability (though I confess I think little of both The Boy Who Lived and The Girl on Fire).   With the glut of these supernatural bodice-rippers, film producers have been searching for the next Twilight (a cash machine made from mud).  Grabbing anything they could lay their hands on, the effort to turn straw into gold continues.  The most recent example is The Mortal Instruments: City of Bones, the first in a threatened series of film adaptations of Cassandra Clare's novels.  Judging just by the film adaptations not just of The Mortal Instruments but all those of their ilk, the books teens read today are intellectually empty, obsessed with supernatural/occult elements, place a vapid girl at the center of universe-shattering love triangles, and would be laughed out of an eight-grade English class with their silly dialogue and nonsensical plots.

Instead, we are condemned to films that constantly threaten to tell more of these terrible stories.  That City of Bones is a simply dreadful film goes without saying.  That it is derivative of other films altogether (particularly in one plot point that is flat-out horrifying) makes City of Bones not just a disaster, but downright obscene.

Clary (Lilly Collins) is your typical teenage girl, with a platonic best male friend, Simon (Robert Sheehan), who is obviously in love with her but Clary is too oblivious to notice.  On her birthday, she gets Simon to go into a club, intrigued by a strange symbol only she can see.  Someone notices that she can see these symbols and they manage to get in.  Here, she sees a man getting murdered, but only she can see the crime.  This alerts the assassins, but she gets Simon and flees.

Shortly afterwards, her mother Jocelyn (Lena Headley) is attacked by a group of other assassins, going on about a Cup.  Rather than let it fall into their hands, she takes some sort of potion that renders her in a state of animated suspension.  Clary comes in and finds their apartment in shambles, and she reencounters the assassin, who calls himself Jace (Jamie Campbell Bower).  Soon they and Simon are spirited to a building invisible to Mundanes (read Muggles), and here Clary learns the first of many secrets: she is a from a line of Shadowhunters, not unlike Jace and his crew, brother and sister team of Alec (Kevin Zegers) and Isabelle (Jemima West).  What the men who took Jocelyn were after was The Mortal Cup, one of three objects sacred to Shadowhunters, descendants of angels who battle demons.


Now she must come and help find The Mortal Cup (which I think can transform humans into Shadowhunters) and keep it from the man her mother warned her about, a mysterious Valentine.  This endeavor takes most of The City of Bones' plot, which involves saving Luke (Aidan Turner), whom Clary has always assumed was her mother's long-term boyfriend but is really a werewolf who protected them both.  It also means going up against next-door neighbor/witch Madame Dorothea (C.C.H. Pounder), who has unwittingly held the cup all these years, and rescuing Simon, who was taken by vampires to draw the Shadowhunters so they can get their turn at Cup.

I know...when you see it on paper it's hard not to laugh.

As poor Simon continues to pine away for Clary, she is too attracted to Jace to give much thought to anything else.  This puts her in a love square: Simon, Jace, Clary, and Alec, whom Clary has deduces is gay and in love with Jace.  Jace and Clary share a strong kiss, so powerful it sets off the sprinklers!  However, through a portal in the sanctuary Hodge (Jared Harris), a Shadowhunter who cannot leave the sanctuary, allows entry to Valentine (Jonathan Rhys-Meyers), exchanging The Mortal Cup Clary has discovered for his freedom.  With Valentine and his minions about to overrun the sanctuary, we get not just a large battle involving the werewolves (who masquerade as mechanics) and the Shadowhunters but a big twist:  Valentine is Clary AND Jace's father!

This would make the romance and sexual attraction between the two problematic, I imagine.  Simon's looking better all the time.

In any case, in the end the Mortal Cup is secured, Jocelyn is safe albeit still in a coma, and now it's off to the Institute with Jace, who senses in The Force (I mean, in his heart) that they are NOT brother and sister.

Why, oh why, do I condemn myself to these terrible films?  As the Pet Shop Boys once said, "What have I done to deserve this?"  The Mortal Instruments: City of Bones is not just a mess overall, in many ways it is a pastiche of other films, some awful (Stephanie Meyer is a fan of the series, which should tell you all there is to say about the quality of Clare's work) and some among the greatest ever made (anyone who sat through this nightmare and DIDN'T think when Valentine told Jace that he was his father and offered him a chance to join him, 'Empire Strikes Back'-knockoff simply doesn't know movies).

It is not just Jessica Postigo Paquette's adaptation that is wrong.  Granted, I imagine the source material already is idiotic and there isn't much anyone can do with something so dimwitted.  It is that there are moments that are so hilariously bad that it makes a viewer go from mere smiles at the inanity of it all to chuckles and finally out-and-out laughter.

Take for example after Dorothea has apparently defeated Jace, Alec, and Isabelle (putting Alec in mortal danger in the process).  Leaving aside the stupidity that Johann Sebastian Bach was apparently a tattooed Shadowhunter whose music was created especially to smoke demons out (Bach: Demon Slayer in a theater near you!), we are asked to take seriously that after this great battle where another apartment was decimated that this transformed witch would close a half-destroyed door.  I laughed out loud at this idiocy, and there was still more to come.

Let me address this whole 'Jace/Clary' romance thing.  It is horrible on so many levels.  First, even if they are NOT brother and sister (I suppose anyone stupid enough to make a sequel will leave that question unanswered until they wrap this series up), the suggestion that they might be leaves a very sick feeling.  Maybe Valentine is lying to them both for his own nefarious reasons (although how someone who is suppose to be hundreds if not thousands of years old could have hooked up with a woman who claims to have not seen him for centuries and give birth to TWO children who were either themselves born many centuries ago and not know it or really are in their teens/early twenties is left unanswered).  However, while Clare apparently was NOT influenced by Star Wars, at least in the Original Star Wars Trilogy there really wasn't any sense that Luke and Leia were passionately in love with each other, in The Mortal Instruments Jace and Clary are built up to be an epic romance.  Therefore, if they ARE brother and sister, it's really flat-out disgusting.

Another level is that frankly Bower and Collins don't have any chemistry between them.  Their romance is rather rote, and there is more connection between Simon and Clary than there is between Jace and Clary.  Finally, I think that Sheehan is just more attractive physically than Bower.  Just like I think Harry Styles is a rather ugly-looking fellow despite the constant push to make him a tween/teen sex symbol, I think Bower is not good-looking.  As much as Bower is being thrust at me as the guy I should be rooting to get together with Clary, I kept hoping she would be sensible enough to go with the more pleasant and physically attractive Simon.

It doesn't help that no one apart from Sheehan actually 'acted'.  He looked like he was the only one who tried to make his character believable, so he's the only one who shouldn't be embarrassed by this whole mess.  Rhys-Meyers took this Bartha role and didn't bother to try to tone down the camp aspect of this 'evil' ex-demon hunter. Even if he had tried, how do I fear a fallen demon hunter named 'Valentine Morgenstern?' A little anti-Semitism there, Cassandra?  Even worse, the main proof Mr. Morgenstern (seriously?) has to show Jace and Clary are little Morgensterns is by altering the ring Jace's parents gave him.  The ring which has a W for 'Wayland' is merely turned around to show that it is really M for Morgenstern.

Really, you DON'T want me to laugh at that?

Everyone else save Collins was hopelessly flat and uninteresting.  Collins I think did the best she could with lousy material, and after all, what can any actress do with a role that requires a supposedly strong girl to faint a lot?

Let me digress to offer that the whole 'Alec in love with Jace' business is bizarre only in that a.) there is very little to suggest either in Zegers' performance or the screenplay that Alec does pine for Jace and b.) this plot point is mentioned but never explored.  That being the case, why introduce it in the first place?

When you have a story that throws in vampires for no real reason except to have some sort of battle, along with protective werewolves and warlocks and demons, you can't ask a sensible audience to take this seriously.   However, I never understood how arbitrary so much of City of Bones was.  How was it that Simon could see what Mundanes like himself cannot?  How was it these Shadowhunters never realized that Clary had a daughter, or that their neighbor was a witch?  The mythology The Mortal Instruments is trying for is not complex as it thinks it is.  It's just convoluted and a mess, like the film itself.

The Mortal Instruments: City of Bones (anytime a film has a semicolon in its title, it's either a promise or threat that there will or may be more) is a laughably bad movie that is too long and too boring to believe, let alone enjoy except as almost camp.  If it were a spoof of the Twilight-inspired crap that has flooded the teen/tween market, it might have been serviceable.  As it is, this film makes me think that the next generation really is stupid and that we are indeed approaching the End of Western Civilization if people prefer to read things like The Mortal Instruments over something like Stephen Lawhead's Byzantium or Brave New World or even The Catcher in the Rye.

Finally, to all those Mortal Instruments fans, I just want to let you know there was another group obsessed with runes.  Congratulations, you now have something in common with Nazis.