How did it get to be this way?  How was it that Franklin & Bash, a show that I loved the First Season, turn into a show I despise by Season Three to where I wonder whether it is worth my time watching anymore?

The problems of Franklin & Bash that I saw in Season Two (the growing immaturity of the lead characters, the stupidity of their cases, their inability to win without stunts) have only grown in Season Three.  While Breckin Meyer's Jared Franklin and Mark-Paul Gosselaar's Peter Bash were once fun-loving but basically good and competent lawyers who could think their way to solutions, Franklin & Bash's co-creators Kevin Falls and Bill Chais now make them into self-absorbed jerks, dim-witted, incapable of anything resembling functioning humans, and in the case of Franklin, someone who despite all protests to the contrary may be a closet homosexual in deep denial that he is in love with his best friend.

Let's look at the episode rankings.  In Season Three of Franklin & Bash, like in Season Two, only three episodes went above an average of 5 (that's three out of ten episodes).  Unlike last year, though, none of them managed the lowest score possible (that is a 1/10 for Freck).

In Order From Best to Worst:

It's gone down from 4.6 (almost five, making Franklin & Bash an average show) to now below average.

I think the big problem with Franklin & Bash today versus how it started is with in how the two leads are devolving.  The continued behavior of these two, particularly Meyer's Franklin, has gone from charmingly goofy to downright cruel.  Take how dismissive they are towards Reed Diamond's Damien Karp when he is charged with murder.  Sure, eventually they defend him, but afterwards they attack him with fruit launched at him through a baseball-pitching machine (one they decide to keep and bill to the firm rather than spend their money because...well, because they just want to keep it).

I can't bring myself to root for people who not only treat others with contempt, but think they are immune from criticism of any kind.

There are also other elements I find distasteful.  At first they were able to win their cases through getting their antagonists to trip themselves up.  Now they win by pulling elaborate tricks that I doubt people would approve of.  Going back to the abysmal Freck, they first doctor photos of the D.A.'s wife in bed with Pindar, and after that backfires, they tell their client to plead guilty to a crime they all know he didn't commit in the hopes of tricking the villain.  This is stretching things way too far, relying on outside factors they have no control of.

Let's also throw in Heather Locklear's new character Rachel King.  I figure she was brought in to give them an antagonist that, unlike the easily defeated Karp or flat-out bonkers Stanton Infeld (Malcolm McDowell), could not easily be either intimidated or impressed by their charm or antics.  She started out well but by mid-season she seems to be an afterthought, not arguing many cases and not using her power to reign in Franklin & Bash's eccentric antics.  When King did begin to reestablish prominence, she turned into the stereotypical bitch.  She takes advantage of Karp's mental frailty to attempt to get the judgeship he wants (even going so far as to screw him over for it quite literally) and at the end of the season, Rachel's position is in limbo.

Will she stay on given how she sabotaged the firm?  I don't see how she could given her acts and the way she seems to show her contempt for everyone at the firm.

Locklear doesn't do much on the show and has not proven much of an antagonist for Jared and Peter given how they actually won a bet against her that would allow them to come in later than everyone else.  One would think that as their boss she'd say, "No, you two aren't special.  You'll come in at the same time everyone else does and that's the end of it."  This, however, is how things would be handled in the real world.  In the Franklin & Bash world, the two leads can do what they want when are where they want because they're Franklin & Bash: Legal Geniuses (despite massive proof to the contrary). 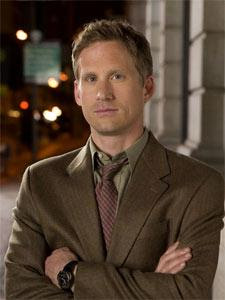 If there is anything good in the show, it's Diamond, who is constantly being humiliated and still comes across as the most human of the lot.   We're suppose to dislike Karp and love Franklin and Bash, but the end result is contrary.  I like Karp because of his flaws, like diligence, duty, and a sense of propriety in dealing with people.  He is snarky with Jared and Peter, but he's up front about his disdain for them (and they give him good reason to detest them).  Also, unlike any of the other characters, he actually has an arc.  He starts as the stiff Karp we first met in the Pilot but now, given his accidental killing of Judge Dinsdale, Damien has gone through some transformation.  Diamond makes it both believable and amusing without making him as big an idiot as Jared and Peter.

The resolutions to the cases are far too easy (an open mike catches one criminal for example).  There is no clear decision as to what Peter's relationship with Charlie (Nicky Whelan).  As the song goes, he's hot and he's cold, he's yes and he's no.

This is already bad enough, but we keep getting proof that Jared is in love with Peter.  He envisions a world where they are always together, doesn't seem too nonplussed when Charlie's daughter Tess asks if he is Peter's 'life-partner' (wherever in the world would she get that idea), and at one time calls out to Peter, "See you at the office, honey".  Granted, it might have been flippant but it still is highly troubling.

I just find that Franklin & Bash makes the two characters so unlikeable (in particular Breckin Meyer, who unlike Gosselaar never gets any comeuppance for being the 'bigger' jerk of the two).   The cases are dumb, the characters even more dumb and neither one really worth our time.  I do wonder if I will keep watching Franklin & Bash Season Four.

I now no longer care about these characters, and I can find no case for them. 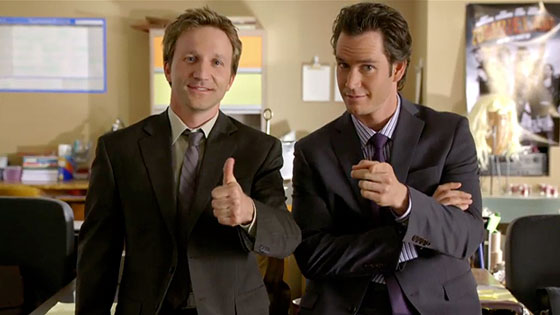 It's about time Elmo "Jared" Franklin and Peter Bash grow up...and that is not a Breckin Meyer short joke.

Next Episode: The Curse of Hor-Aha