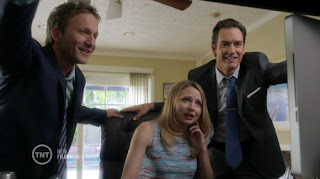 It's official: I HATE THIS SHOW.  I once listed Franklin & Bash as one of my favorite television shows, but having seen the lazy and frankly insulting Freck, I wonder how people can see things like this and think it's worth the time.  I took a brief hiatus from Franklin & Bash and decided it was time to return.

Freck is lazy, predictable, and in many ways, appalling.  I've never thought a show that I started out loving has turned into one long joke on the audience.  There is no joy in Freck, no sense that either Jared Franklin (Breckin Meyer) or Peter Bash (Mark-Paul Gosselaar) are functioning human beings, let alone people we care about and especially rally around.  The fact that these two idiots have great success in life is already bad enough, but that Freck is unoriginal and even cruel sinks it to barely watchable.

Peter and Jared's friend Robbie (Eddie Jemison) is suspected of murdering his roommate/mutual friend Roderick "Freck" Hildebrandt (who also happens to be Robbie's fiancée's ex).  Robbie though, isn't worried in the slightest: Freck is a notorious prankster, pulling elaborate stunts that constantly put people in humiliating situations.  Though there's blood all around the home he and Robbie share, a shovel in Robbie's trunk with some bloodied shoes, the three of them think that maybe, just maybe, Freck really is alive and is just pulling a giant joke.

Well, despite having no body there is enough to charge Robbie with murder.  This puts his fiancée/Freck's ex Nancy (Courtney Pauroso) in a bind: can she truly marry the man who (may have) murdered their friend...the same friend who pulls pranks that constantly humiliate everyone around him?  Infeld Stanton King boss Rachel King (Heather Locklear) wants the boys to dump Robbie, but being the boys they are, they won't hear of it.  So, it's off to defend someone who may or may not have murdered another friend of theirs.

In the first of the two other subplots, Damien Karp (Reed Diamond) defends the Fresh Slice Bakery, a company run by former gang members attempting to make a new start (and new empanadas de pina).  He thinks its a waste of his time and would rather switch cases with Franklin and Bash.  No dice, of course.  The second subplot has to do with Charlie (Nicky Whelan), Peter's current girlfriend, and her impending move to San Francisco.  He tries to bond with her daughter Tess (Hailey Sole) as much as a man whose never taken much adult responsibility can.  Tess finds more bonding with Pindar (Kumail Nanjiani) who is a fellow Star Wars enthusiast (even if he is hyper-sensitive about his Boba Fett figure).

Franklin and Bash come up with a perfect solution to the Freck crisis (especially since Freck has decided to reveal he is alive by emerging from the sea wearing nothing more than a Speedo and diving helmet to Pindar, the name "FRECK" tattooed on his forehead).  Their solution: have Robbie plead guilty to murder, then marry Nancy right away, hoping that Freck's anger will flush him out before Robbie goes to jail.  As the ceremony takes place after Robbie pleads guilty to murder, Nancy becomes the Runaway Bride, fleeing from the man who 'killed' their friend.  Wouldn't you know it: Freck magically appears to her, and wouldn't you know it: Jared and Peter had the police waiting for him.

Oh, and the subplots?  Well, the fight between little company Fresh Slice Bakery and the conglomerate Brockmore Foods is resolved off-screen pretty quickly and while we are left with a mystery of "Who's Billy?" (in response to Tess' comments about someone in Charlie's life), the actual status of Charlie and Peter remains unclear...


I know many Franklin & Bash episodes don't exactly tax the minds of the viewers, but Freck is just flat-out insulting to anyone watching it.  To catalog exactly where Freck goes wrong would take frankly far too much time, so let's just hit the clip reel:

1.) You still are living with someone who got you arrested for armed robbery and got you run over.
2.) You don't appear worried that this same individual who did 1.) might have actually been murdered because you think this may be the ultimate Freck prank...even if such a prank were particularly loathsome and criminal.
3.) You still refer to a nearly forty-year-old man as "Freck" even though his name of Roderick Hildebrandt does not lend itself to such a nickname.
4.) Your defense team, rather than argue that since there's no body, there's no actual crime, instead tells you to plead guilty to a crime you know you didn't commit and be sent to prison in the HOPE of fleshing your dear friend (the one who did 1 to you) out into the open.
5.) You AGREE to pleading guilty to a crime you know you didn't commit.

And that's just from Robbie's highlights!

You've also got two 'brilliant' attorneys who suggest basically pleading guilty to a non-committed crime, a group of men approaching 40 who don't appear nonplussed about someone still pulling pranks that should have been left in a frat-house, a criminal who times things more brilliantly than most Bond super-villains (what ARE the odds that Freck would know where to show up to a stunned Pindar, right down to having FRECK written over his forehead), and two subplots that don't add a single thing to the story.

Actually, on the last one I think I will walk back a bit.  Tess asks Peter in reference to Jared, "Is he your life partner?"  Charlie tells them that she's seen them take walks on the beach at night together many times, and from this she draws the same conclusions I drew many moons ago: Jared is a closeted homosexual in denial about his sexual identity and who is possessive about his best friend.

Richard Hewett and co-creator Kevin Falls' screenplay has such odd moments.  It might sound clever and cute to hear a little girl ask these two half-wit men whether they are involved romantically with each other, but it does make one wonder why Tess would think such things.  Is Charlie keeping her affair with Peter such a secret that Tess could suspect that Jared and Peter are 'partners' or more bizarrely, that Peter is having simultaneous sexual relationships with both Charlie and Jared?

﻿
I see Freck and think, what else could they have done to make this thing even worse?  How bout another subplot that appeared to be there because they needed time to fill?  Well, we got that taken care of, because the Fresh Slice Bakery (filled with former thugs of Hispanic extraction who are just as dumb as Jared and Peter...one of them said the Quaker Oats 'Lady', the one with the hat, was the fictional food product figure he found attractive) not only played no part in the story but got resolved so quickly one wondered exactly how they managed to pull off that trick.  We also have when Jared and Peter appear to try to kiss-up to Judge Elliot Reid (John Ratzenberger), which is so patently played as forced it makes one wonder whether they were trying to show they were insincere or merely failing to try to be convincing (which is what 'acting' is all about).

Oh, I didn't mention one of those patented Franklin & Bash tricks to win their case: Photoshopping pictures of the D.A.'s WIFE in bed with Pindar and sending them to the D.A.  This was suppose to show that a person who became enraged could temporarily lose control and commit murder, but somehow this makes me think Elmo "Jared" Franklin and Peter Bash are low, reprehensible people, not the heroes we're suppose to rally and/or cheer on.  It's an ugly thing to doctor photos of your wife in bed with another man, and frankly, it makes me hate these two for going so low in doing so.

The most horrifying element is the part where we discover that Charlie once had an affair with Richie Sambora...who just happens in real-life to be Heather Locklear's ex-husband.  I wonder what she thought of that storyline, or if she was at least asked for her views on using her former husband as a plot device.

Freck is an ugly episode: stupid, illogical (even by Franklin & Bash standards), mean-spirited, and just something that shows that Franklin & Bash hasn't just jumped the shark...it's hunted it down to extinction.

Freck gives new meaning to the term, "a show that's taken a dive..."

Next Episode: Control
Posted by Rick at 12:01 AM