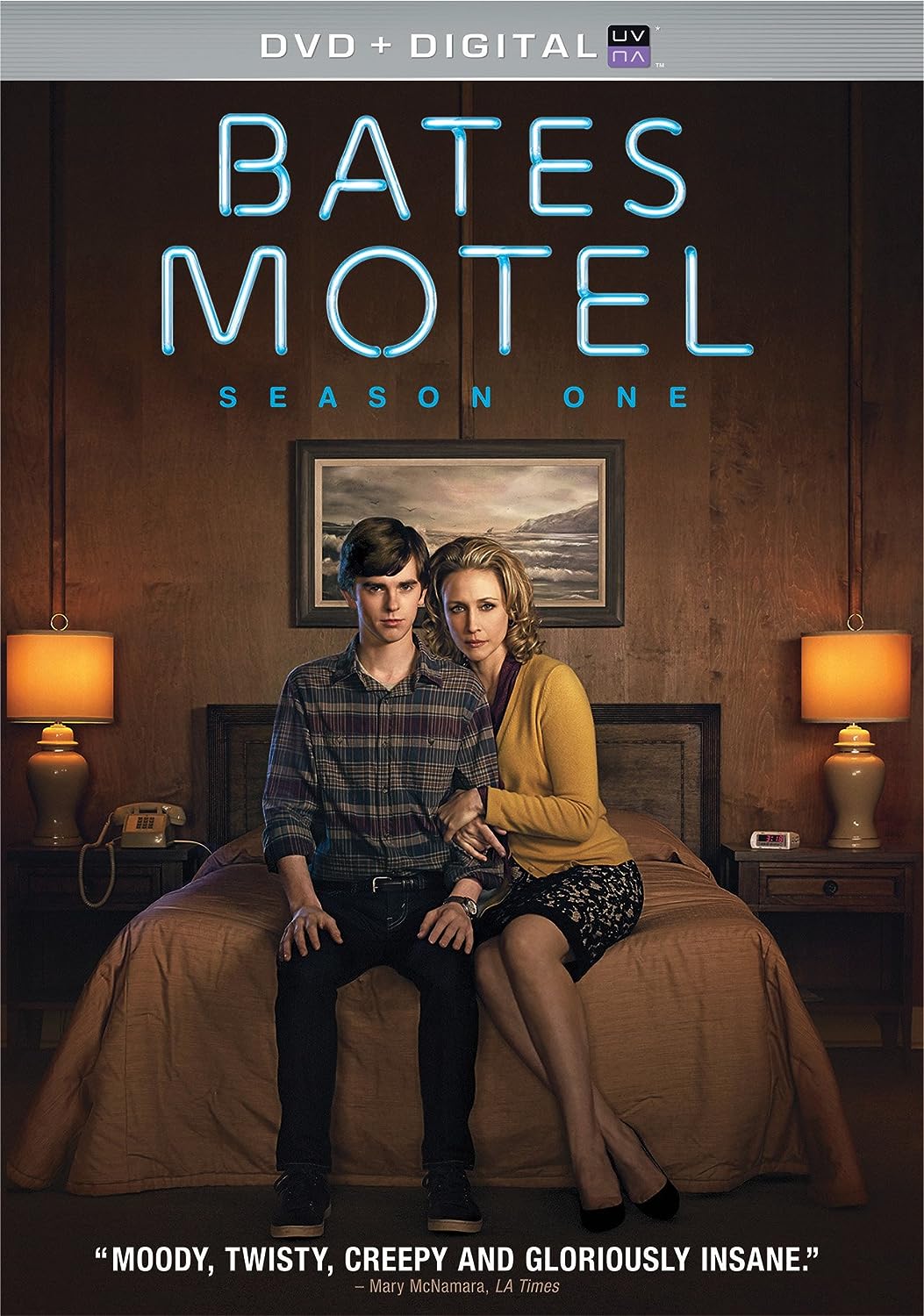 When Bates Motel premiered, I did have a few reservations.  Psycho is one of my favorite films (and in case anyone is curious, I still take showers with the door unlocked).  I've seen all the sequels (and hope to have a retrospective once school ends...someone remind me).  Bates Motel might have been another version of Psycho IV: The Beginning, where we learn how Norman Bates grew to be the smiling, murderous Momma's Boy we all know and love.  When it premiered, I also wondered whether new characters (like Norman's half-brother, the motorbike-riding 'bad boy' Dylan) would water down the series.  Even the name 'Dylan' struck a worrisome note with me.  I feared that Dylan, the hotter criminal brother, would soon become the focus of Bates Motel to where Norman would be almost an afterthought, a bit like what happened on Doctor Who, where the character of The Doctor took a back seat to other characters like River Song, Madame Vastra & Jenny, or the "Ponds" to where THEY became the focus of episodes and entire seasons while the title character ended up a guest character on his own eponymous show.

Now that Bates Motel has finished its first season, all those fears can be laid to rest.  Bates Motel is now its own entity: drawing from the Psycho mythos but not beholden to it.  Bates Motel is not a prequel to the Hitchcock classic.  Instead, it is a series that draws inspiration from the story of Norman Bates and spins its own world, one that is closer to Twin Peaks than Psycho.

Difference being that Bates Motel's setting of White Pine Bay makes the town of Twin Peaks look like Mayberry in comparison: seductive teachers, corrupt officers, sex slavery, drug running and manufacturing, murders left right and center.  It also throws in new elements that Twin Peaks didn't touch (and I'm not talking weird dancing midgets...although those are always nice to have around).  There is that intangible difficulty of growing up: finding a version of love, mixing sex with it, and finding that sometimes the one who is best suited to you is the one you ignore.

Before I give my own reflections on Bates Motel Season One, let us rank individual episodes from Best to Worst.

Even the 'worst' Bates Motel Season One episode (Underwater) was on the whole pretty good.  It was just a focus on the comedic aspects of getting high that watered it down (pun intended).   Minus that, we find that Bates Motel grew into something excellent: a television series that grew and evolved from its source material into something both contemporary and unique.

I think this was a fear among Psycho fans: that the series would become so immersed in the present-day setting that it would grow away from its roots.  I don't think so.  We have those nods to the novel and film (Norman already has picked up taxidermy), but the addition of new characters (Dylan, Nestor Carbonell's Sheriff Romero) have made the series into the story of not just how Norman Bates became a murderer, but about the strange world he and his mother find themselves in.

Bates Motel Season One can be divided into two parts: the first six episodes dealt with Story One: Norman, Norma and the Asian sex slave ring Norma's lover ran.  The remaining four did have some of the aftereffects of this storyline, but now they centered on the Jake Abernathy character.  Tied into all this is the strange and complicated story of Norma Louise Bates and her son.

It is hard to make a serial killer sympathetic, but I think it helps when you have the still sweet-faced Freddie Highmore play Norman Bates.  His performance is that of a good kid who has been beaten down so much psychologically that he soon starts crumbling, equating sexual desire with not so much immorality (he certainly was able to enjoy losing his virginity to the most desirable girl in town) but with danger, with suspicion about the other's motivation, and with ridicule.  This character is someone who wants to break free, who wants to live a life like everyone else, but who has been so hamstringed by misguided loyalty to his mother that in truth Norman has been smothered almost beyond salvation.  He takes a violent recourse to 'defend' his mother, which sadly means that his own mother's love has damned him.  Highmore's soft voice (perhaps affected because he has to keep an American accent to mask his British background) adds to his interpretation of this generally sweet kid whose untapped fury makes him highly dangerous.

Highmore, in short, gives Norman Bates humanity and it is a great performance.

However, it is Vera Farmiga who is the clear standout in Bates Motel as Norma Bates.   Farmiga never plays Norma as a monster.  She is instead a deeply flawed woman: selfish, incapable of letting her youngest son/namesake go, but also someone who always believes she is doing the right thing (even when she clearly is not).  Norma throughout Bates Motel is if nothing else, struggling to survive.  She has this constant attraction to men who either torment her (Deputy Shelby, Norman's late father) or who she wants to control but can't (Sheriff Romero, Dylan).   Although Norma is self-centered, domineering, and cruel to others when she perceives disloyalty (especially her sons), I never think of her as 'evil'.  Instead, I see her as someone desperate to survive and who truly thinks she is doing good (even when it is clear to everyone but her she isn't).  It wasn't her fault she fell for the handsome Deputy Shelby (though she was not above using her feminine wiles to get control over him initially).  Her confusion and fury when she learns the truth about Shelby's secret life is almost heartbreaking.

Farmiga was rightly nominated for Outstanding Lead Actress in a Drama Series for Bates Motel, and it is no wonder: her Norma Bates is an extraordinary, fascinating character.  She's the type of character of whom one could say, 'she means well, but...'  It is fascinating to watch Farmiga's performance in Bates Motel, which alone is worth the hour.  To see an actress make a character 'human', in turns sympathetic and unlikable, is something of great joy.

While the other supporting cast is equally great (I have grown to like Max Thieriot's Dylan, even if I still think his drug-running subplot is a bit of a waste, and hope Nestor Carbonell...and his amazing eyelashes...continue to cross swords with the fierce Norma as the upright Romero), I have to single out Olivia Cooke's Emma Decody.  New to the Psycho mythos (or at least I think so, never having read the Robert Bloch novel), she is the voice of reason and morality in a town so tainted by sin and corruption.  It is curious that when we first meet her, we think "is the oxygen tank and her cystic fibrosis going to be a character quark"?  Not in the least.  Instead, what Cooke brings to Emma is what Bates Motel has to have: a moral center, a sense of humanity that gives us someone we can relate to.  Emma is a good person shunted because of her illness.  She cares about people (unlike the Bateses, she thinks the only thing to do is tell people about the sex slave Shelby has been keeping) and she actually loves Norman as both a person and a potential lover.  The fact he throws her aside for the pretty girl makes one rally to her, but when she stands up to Norman and basically tells him off we cheer her initiative.

She may have to lug around an oxygen tank, but she is strong in her own way and won't allow anyone to dismiss her.

And for the record, she is incredibly beautiful (and she's already pretty good-looking with the oxygen tank).  A true talent, one we hope we see more often.

Looking over Season One of Bates Motel, we have a great series that spins its own story about how Norman Bates became the serial killer he would eventually turn into.


NEXT EPISODE: Gone But Not Forgotten
Posted by Rick at 6:27 AM