I've been harsh on Mary Pickford, when it comes to sound films.  It isn't that I think she had a bad voice.  Far from it: as a theater actress, she had a very strong and good voice.  It's just that her sound debut, Coquette, was simply wrong for her.  The flirtatious, fluttery nature of her part, coupled with the creaking nature of early talkies, made the whole thing a bore and a wreck to watch.

It also robbed us of what really made Pickford a genuine star to match her extraordinary gift as an actress: her face, a luminous, beautiful face that express anything (joy, sadness, desperation, innocence) with equal ease.   There was just an extraordinary beauty to Pickford, and a fine example of that is Sparrows, a story that mixes both horror and hope, that has really exciting moments and which stands the test of time.  I don't know if Sparrows is as well-known as her other films, but it should be.

Molly (Pickford) is the oldest of a group of orphans in a 'baby farm', a place where the urchins are forced to work long and hard for little reward.  The farm is in 'a certain Southern swampland' (I presume either Louisiana or Florida, though I don't think it was stated), so people don't know what's going on.  The wicked Mr. Grimes (Gustave Von Seyferrtitz) is essentially holding them hostage: he orders them to hide whenever people come, and he punishes them all when Molly takes some potatoes to feed them by denying all of them supper.  He even denies food and medical attention to a very sick baby, who dies in Molly's sleeping arms.  Still, Molly urges the children to keep the faith, reminding them that God's eyes are on the sparrows (hence the title), and He will come through for them (even if her quotations of Scripture are sometimes a bit off).

Things go from bad to worse when Splutters (Monty O'Grady), one of the children, is found by a hog buyer and Mr. Grimes sells him the boy.  Grimes is part of a plan to kidnap a baby from a wealthy family for the ransom, despite the misgivings of Mrs. Grimes (Charlotte Mineau).  The baby, a little girl surnamed Wayne is taken to the swamp to hide for a few days and put in Molly's care.  Molly grows attached to the baby, so when the ransom plan starts falling apart Mr. Grimes decides the best to do is chuck the baby into the swamp (something which is intimated he's done before).  Molly, overhearing this, is determined to save the children by making a desperate escape.

Grimes is first thrilled the children ran off (despite him trying to keep Molly prisoner).  He figures they'll all drown in the swamp.  When the kidnappers rush to get the baby after Wayne agrees to the ransom, they all attempt to get the kids back (Baby Wayne being taken by Molly).  Escaping the swamp and alligators, they reach a boat, unaware this is the kidnappers.  The nappers try to escape, but their lifeboat is crushed when they try to escape.  Mr. Grimes drowns in the swamp, and the children are rescued.  Baby Wayne has grown attached to Molly, asking for "Mama Molly" to feed her.  Mr. Wayne brings her and asks her to stay, and she agrees on condition that the other children stay with her.  A little reluctantly, he agrees.

Mary Pickford has such a luminosity to her face that conveys so much.  Her performance is so gentle and pure and tender, one that really moves you.  A particularly beautiful moment is when she is cradling the baby who is clearly dying.  In a dream, we see Christ as the Good Shepherd, who comes to take the baby in His arms.  When she awakens, she can clearly see the child has indeed been taken to the Lord.  We don't see the baby's corpse, but we get all we need from Pickford, who makes this all the more heartbreaking.

She is still the spunky Mary of reputation, willing to fight it out with Ambrose (Spec O'Donnell), Grimes' son who is just as wicked as his father.  Pickford gives Sparrows some good moments of comedy (to hide the children, they rush up to the barn's upper level, and Molly has to push one up with her head) which lightens the mood of this Southern Gothic horror story.  The idea of throwing children to the swamp where the mud will suck anything in is quite horrifying now, let alone in the late 1920s.  I'd doubt even now, with all the graphic nature of modern films, would we even get a movie that suggested someone had thrown children into drowning mud.

Von Seyffertitz was excellently evil as Grimes, who appears to either have channeled Richard III or suffered a stroke due to his inability to move his left arm.  We know what kind of man he is not just by how he looks, but what kind of man would crush a doll's head and toss it into the mud without letting the child intended to get the doll know?

The sets were wildly convincing, and the pacing (particularly the chase with them facing down alligators was excellent.  Sparrows is a film I think that will be found to be tense, moving, funny, sad, and ultimately uplifting.

Credit should also be given to Jeffrey Silverman's score, which enhances the story.

Given that Sparrows was made in 1926, we can see some of the limitations in filmmaking.  The chase scene of the boats were clearly model ships for example.  However, a little leeway should be given to the film.  In all other respects, Sparrows holds up extremely well.

Sparrows is a beautiful film.  It showcases Pickford in the types of roles that made her famous (the spunky child who triumphed over obstacles) but also gives us a richer, deeper side to The Girl With the Golden Curls, one who sees the ugliness of humanity and still believes God will see them through.  It's a beautiful farewell to Mary Pickford, Silent Film Star, and a good way to close out this chapter of her life.

Pity her sound career could never match anything like in Sparrows. 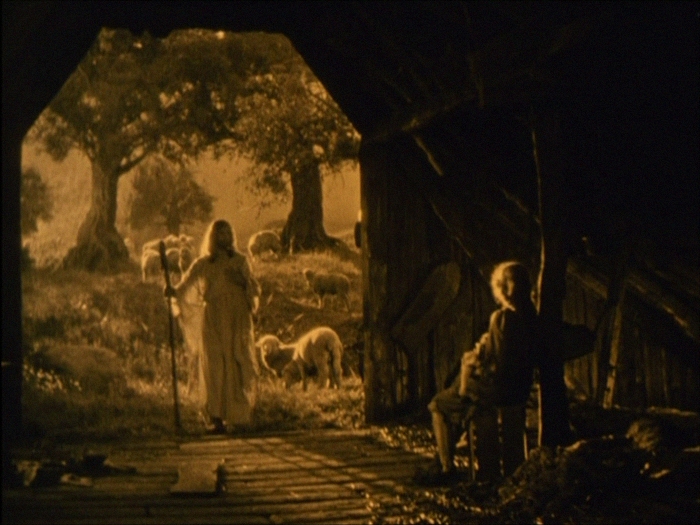