GOTHAM: ALL HAPPY FAMILIES
ARE ALIKE

We close out the first season of Gotham, the Batman prequel detailing the exploits of the future Commissioner James Gordon, with All Happy Families Are Alike.  What I saw was reminiscent more of a Dickens quote than a Tolstoy quote: It was the Best of Series, It was the Worst of Series.  All Happy Families Are Alike has many, many positives.  It also has what I consider one of Gotham's greatest flaws: its inability to keep a cohesive whole.  There seemed to be a wild rush with the season finale, as if the production realized, 'oh, we have to close out this year, which we wasted on a lot of filler stories when we could have done more to lead up to this'.

Fish Mooney (Jada Pinkett Smith), being Fish Mooney, can't help herself by making a grand entrance on the shores of Gotham City Harbor.  She makes such a big entrance that even Selina Kyle (Camren Bicondova) appears enthralled (more on that later).  We're told two weeks have passed, and in that time things are in near-total chaos.  Bruce Wayne (David Mazouz) is still hunting down whatever secret his dad had in the study of Wayne Manor (which is about the only room Master Bruce is ever in), much to the chagrin of Alfred (Sean Pertwee).  The mob war between Don Falcone (John Dorman) and Don Maroni (David Zayas) is taking up all of the Gotham City Police Department's time.

In this war, not even Don Falcone is immune: he is nearly killed and taken to a hospital.  There to visit him, is his protégé, Oswald Cobblepot aka The Penguin (Robin Lord Taylor).  Penguin is not there to rescue his old mentor: he's there to kill him.  He tells Falcone he started the war, and will not get rid of Falcone to take control.  Only one thing: Detective James Gordon (Ben McKenzie) gets there before Penguin can off the Don, placing Penguin and Butch Gilzean (Drew Powell) under arrest.

This might not have been the best move, since now Maroni's men, aided by Commissioner Loeb (Peter Scolari) are also on their way to the hospital.  A shoot out ensues, with Gordon taking down Maroni's men.  A reluctant Detective Harvey Bullock (Donal Logue) comes to aid his upright friend, but Penguin reminds Gordon that as someone under arrest, they are in Gordon's care (oh, and that Gordon owes Penguin a favor).  A wild breakout from the hospital ensues, and Falcone leads them to a safe house where he can start regrouping and retake control.

Into this safe house steps in Fish, now aided by Selina/Cat, who is delighted to find so many of her troublemakers in one blow.  She has promised Falcone's head to Maroni, and has designs to kill Penguin slowly.  Gordon can die a quick death, and Bullock, well, in her words, "We're cool," so he gets to live.  Gordon knows that Falcone is the only person to restore a semblance of order, but Selina won't help.  Enter Maroni, who has the temerity to tell Fish she isn't going to be the Boss.  HE is going to be the Boss.

"We will whip this town like a rented mule," he tells the assembled crowd.  He also keeps calling Fish 'Babes', to her irritation.  Maroni seems to be mocking her a bit, so much so that she steps up and puts a bullet in Maroni's head.

Well, with that even more chaos ensues, as Maroni's men and Mooney's men start going after each other.  The prisoners flee, and Falcone has decided to officially retire.  Those plans get thwarted by Selina, who has recaptured them.  Still, no rest for the wicked, as Penguin comes guns a blazing to have his final confrontation with Fish.  He follows her up to the rooftop, where an epic battle ensues.  Butch, torn between his loyalties, shoots them both in the leg, then immediately repents and begs Mooney's forgiveness.  For once, Fish knows that Butch isn't to blame, seeing the effects of his brainwashing.  No respite, as Penguin takes advantage and pushes Fish off the roof and into the waters, then rising to the edge to declare, "I'm the King of Gotham!"

With all the craziness going on outside, you'd think two women would find some quiet.  No, sir.  Barbara Kean (Erin Andrews), insisting on taking therapy from Dr. Leslie 'Lee' Thompkins (Morena Baccarin) tells the doctor that she, Barbara, killed her parents, not the Ogre.  She also makes it clear her murdering days are not over.  Thompkins flees to the restroom for her life, with a knife-wielding Barbara after her.  Despite this misstep, for once a woman is sensible enough to defend herself: breaking a mirror to get a weapon of her own, they battle it out, with Thompkins winning.

As it so happens, Gordon, Bullock, and Falcone arrive at Barbara's place just in time to see the end of the fight, a knocked out Barbara spread on the floor.

Finally, Bruce gets a clue when Alfred quotes Marcus Aurelius, and he finds a button in the book.  Bruce pushes the button, and as The Dance of the Knights from Prokofiev's Romeo & Juliet plays, the chimney starts to move, and we see the beginnings of a cave... 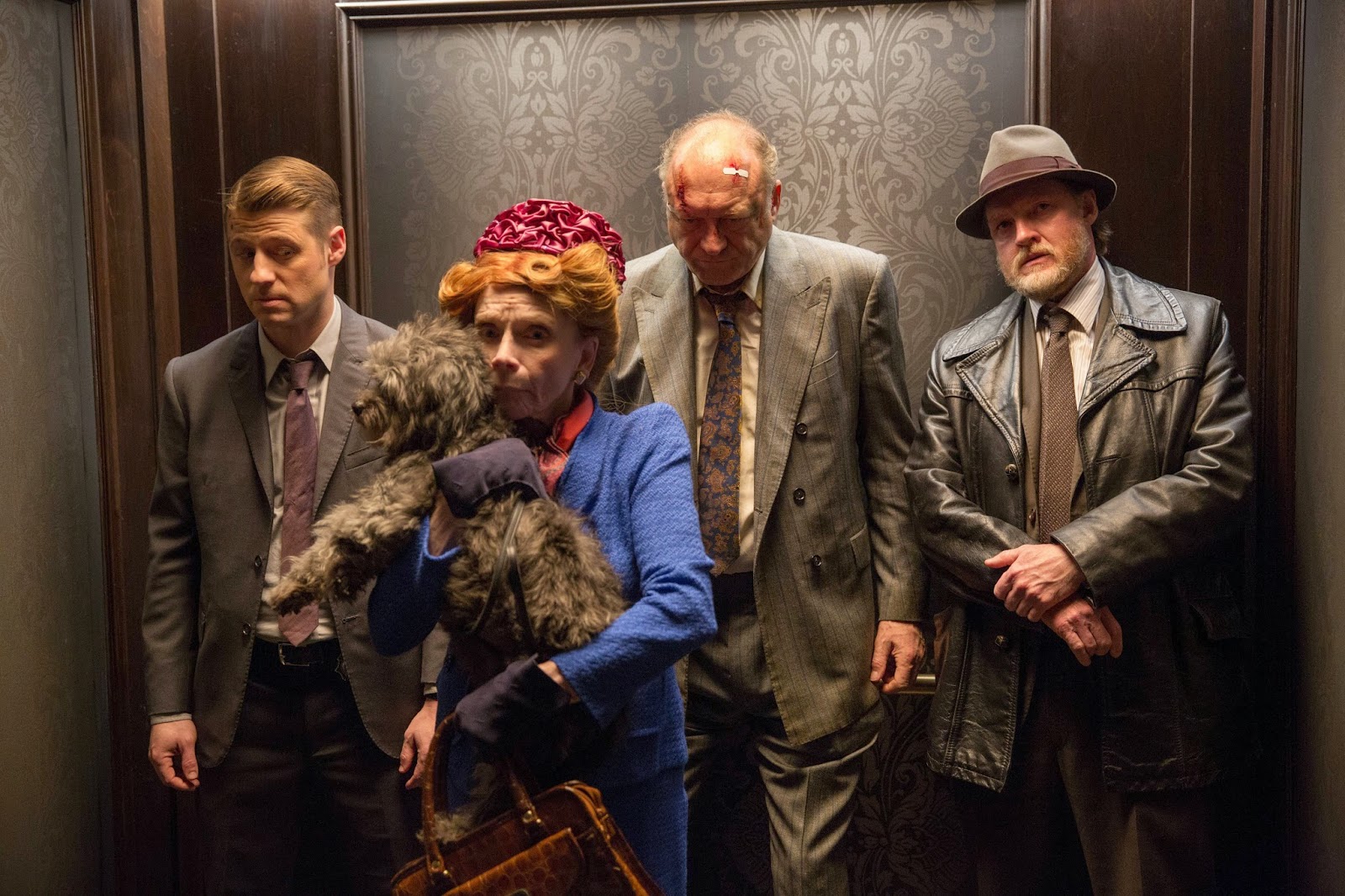 All Happy Families Are Alike has much to recommend.  The action is really intense at times, with the battle at the hospital a highlight.  It also has moments of comedy, both good (Alfred tells Bruce not to press the button by saying, "It could be a bomb", to which Master Bruce replies, "Alfred, that seems highly improbable") and bad (the three battered men riding up the elevator with an old woman nonchalantly riding with them is terribly cliché, though I don't remember if there was any Muzak to add to this).

We also had some excellent acting all around.  Mazouz was in the beginning, middle, and end of the episode, but he did standout work as the young man who is now just on the cusp of making an amazing discovery that will change his life forever.  For the record, we don't know if Thomas Wayne was already building the Batcave we all know and love or if Bruce in the future will add what is needed, but it does answer the question of how it all got started.

McKenzie, who oddly isn't talked much about on a show where his character is the lead, was all square-jawed and intense as Gordon, which I think was the correct way of doing it.  Logue continues to lend his cynical, jaded Bullock a layer of heart.

Of course, the standout (like he always is) is Robin Lord Taylor as Penguin.  The machine gun-toting mamma's boy has come full circle, from the weak lackey to Mooney to literally overthrowing her.  He is cold and ruthless when confronting Falcone, whimpering when facing off against Mooney (but still plotting to try and escape) and confident when he declares himself "King of Gotham".  Penguin is a fighter and survivor, plotter, schemer, and with RLT's performance, someone who will become iconic in the role.

Regarding JPS' Mooney, I know many people actively disliked her and I can see why.  However, I think part of Mooney's appeal was that she was so overtly camp.  She reveled in being evil, and I found that part of her charm: her inability to not chew the scenery.  She was giving an impression of playing with the big boys, and despite her campiness I will miss her over-the-top take on things.  However, here, at least we got to see a little glimmer of real humanity, as she gently tells Butch she too loves him and knows it isn't his fault.

That doesn't take away from the crazy as she blows Maroni's brains out (which was one of at least two moments I wasn't expecting).  "The man vexed me," she says to explain why she just offed the main opposition and her former patron.

Oh, yes, the whole Barbara/Leslie thing.  We all pretty much figured Barbara was nuts, but not THIS nuts! And THIS is the future Batgirl's mother?!  If Gordon had any sense, he'd marry Thompkins (which I know would wreck Canon, but who'd want Bonkers Babs around when you can get a rational doctor).  Andrews' Barbara has also been pretty much hated (and I include myself in this group) but give Andrews credit: she played that crazy American WASP Psycho well (though I wonder if it is cheating that we were led to think The Ogre killed Mr. and Mrs. Kean).

It also leaves us wondering what will happen, which is a good thing for a season finale.

Of course, this is where both All Happy Families Are Alike and Gotham go wrong, very wrong.  We rush through so much when with a little forethought and planning this could have been an epic finale. If memory serves correct we get one scene (ONE) where GCPD Forensics Officer Edward Nygma (Cory Michael Smith) and his secret love Kristen Kringle (Chelsea Spack) are involved.  Kringle has figured out Nygma's clue, and while both are excellent (Nygma begins to say, "How clever" before stopping to correct himself to say, "How odd") the whole thing seemed almost an afterthought.  We have a great moment where Nygma is finally breaking down mentally to where he's almost beyond repair, the Riddler coming in close, yet despite all of CMS' good work, we get very little for it.

Same goes for the mob war.  Last time we saw Mooney, she'd taken a bullet to her belly, and now she seems none the worse for wear.  How did Selina hook up with Mooney?  Couldn't Bruce's investigation into his father's Stoic legacy have taken longer?  All these are valid questions, yet All Happy Families Are Alike has to speed right past them because despite twenty-odd episodes there wasn't enough time to give all these story threads their due.

I also didn't like that Leslie, rather than try to run out of the apartment, runs to the bathroom (another cliché).  Still, at least she was able to fight.

I think my biggest beef with All Happy Families Are Alike is that it was extremely rushed for the stories it was telling.  That did damage it, especially after we'd come from a really strong storyline just a few weeks previous.   It isn't a bad episode: it has a lot of action (and a return to the mob war that had kind of slipped off to the side), some solid acting from the cast, and great teases for Season Two.

If it weren't for that rush to get things done, we would have had a grand slam.  As it stands, All Happy Families Are Alike hit a double, which is still pretty good but not as good as it could have done.  It's a strong but less-than-spectacular end to Gotham's first season.

Season One Overview
Posted by Rick at 9:20 PM