Sometimes you hear about a particular book or film with such reverence that it becomes almost too much to really get you enthused about it.  It's too legendary, too above us, for us to really embrace it.  For some time, the Chinese silent film The Goddess was such a film.  I had heard that its star, Lingyu Ruan, had given one of the greatest performances of silent film, and perhaps one of the greatest performances of all time.

I am here to report that it's all true.  The Goddess is an extremely beautiful, emotional film, and Ruan's performance is one of the most moving I've seen in a film, silent or sound.  It might be odd to have a silent film dating from 1934, when sound was pretty much the norm throughout the world.  China, however, still did not have sound due to various factors (particularly war).  However, it's not a hindrance to The Goddess.  We are allowed one last chance to see that silent film performances can be as powerful as sound ones, and there are beautiful visual touches and a determination to push boundaries as much as the technology allowed.

The Goddess (Ruan), a euphemism for prostitute in China, has a young son.  She has no other recourse but to sell her body to make money.  One night, while fleeing a police sweep when she is plying her trade, the Goddess takes shelter in the home of The Boss (Zhizhi Zhang), whom I nicknamed "Fat Jim".  The Boss asks that she repay his 'kindness' with some free company, and reluctantly she does.  However, "Fat Jim" decides that he is going to make the Goddess his personal woman as well as her pimp.  He makes her a whore twice over: once for himself, and once more on the streets.  She attempts to escape, but he quickly finds her and holds her son for ransom, claiming to have sold him for $200.  She's horrified and heartbroken, but he soon tells her that in exchange for being his woman/whore, both will remain safe.  Reluctantly, she agrees.

Soon, her son starts growing up, and she wants a better life for him.  Saving up money from her trade (she tells Fat Jim that she had bad nights), she decides to enroll him in school.  Her son thrives at school, though like on the street, he is taunted due to her mother's profession.  At a recital where he is a hit, the Goddess' joy is short-lived: the other mothers soon begin gossiping about her.  They soon call for her son to be expelled.  The kindly Principal visits them, sees how much the Goddess loves her son, and decides to fight for him to stay.  The other teachers will not budge, and the Principal resigns in protest.  Fat Jim has also found her secret stash of cash and gambled it away.  This double blow is too much for the Goddess, who in a fit of rage kills Fat Jim.

Arrested, tried, and sentenced to 12 years prison, it looks bleak.  However, there is still hope.  The Principal, having read about the case, visits her in prison, telling her that he will adopt her son and see to his education.  She begs him to tell him she is dead, so that he won't bear the shame of her act.  The Goddess ends with her seeing her son in a vision, imagining a hopeful future as she begins her term. 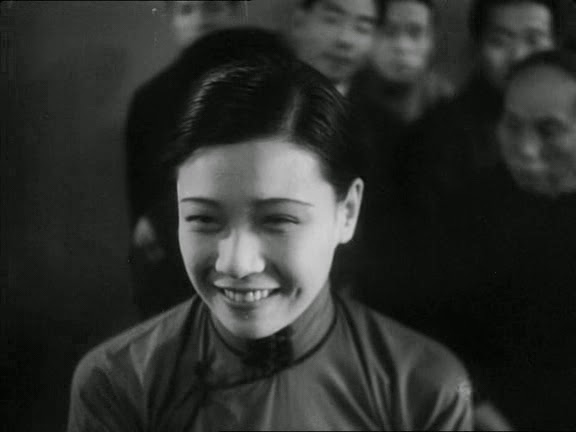 The Goddess is an extremely moving film about both the struggles of a good woman in a bad business and the depth of a mother's love.  The emotional impact comes almost exclusively from Ruan's performance.  Ruan, a deeply troubled woman who would tragically commit suicide a year after The Goddess, makes you feel so sorrowful and protective towards her character.  Ruan gives the Goddess a sad world-weariness, a woman aware that life will never be better for her yet hopeful that it will be for her son.

When she first meets The Boss, he makes an indecent proposal.  Ruan looks at him, not in anger, not in shock, but with quiet resignation that this man will be like all the other men she has sex with: uncaring, uninterested in her as a person, and one who will use her.  Whenever she plies her trade, we see a terrible sadness within her.  The Goddess knows she will never truly escape.  No Happy Hooker is she.

However, the only bright spot is her son.  Everything involving him causes her to light up: the way he is learning, the happiness to which she sees him at the recital.  If the Goddess has anything good in her life, it is her child, and she is determined to provide for him, even if it means continuing to sell her body and deal with The Boss (Fat Jim).  Her pride in the little things (him showing her the newest exercise, his recital, are the joys of any proud mother.  However, we also see the shame she carries as a prostitute.  The happiness she has at the recital gets busted when she hears the other mothers gossip about this 'unworthy' woman.  The fact that we know she is a good woman regardless of her profession, and how both Fat Jim and the 'moral' woman are ganging up on her, makes us very protective of her.  Ruan really creates a most moving performance that makes us totally understand what she is going to do.

Her whole journey: the crumbling of her hopes save for her son, the abuse she endures all around, the eventual killing of Fat Jim (which at first I wanted, then thought was a desperate decision that doomed her), is one that we have genuinely involvement with.

The Goddess also has some wonderful technical aspects.  You can see director/writer Yonggang Wu going for visuals that perhaps the technology was not up to there.  From time to time we see the bright lights of Shanghai shimmering as we get this sordid story.  Wu also likes process shots and uses them effectively: Fat Jim sees the beautiful Goddess  in that same shimmering Shanghai night, and The Goddess ends with her "seeing" her son, happy and laughing.  At one point, we see how dominant Fat Jim is when we see her and her child, crouching between his legs as he towers over her.  You can see Wu pushing the visuals to be as impactful as the story.

Donald Sosin's new piano score for the film enhances the emotional impact of the film.

Speaking of the story, perhaps the only minor flaw is the somewhat happy ending.  We have the principal coming in to save the boy from a gruesome fate, with the promise of a good home and education.  It isn't strictly a deus ex machina because we have seen him before and we saw that he understood she was a good woman forced to doing bad things.  However, it is a bit convenient that he could help.  Maybe it was a bit of a Hollywood ending, but I didn't find fault with it.  It wasn't a sudden turn of a good fortune, and given the tragedies she's endured, seeing that she is happy gives one a good feeling.

The Goddess lives up to its reputation: a beautifully rendered film, with a heartbreaking performance by Ruan Lyngyu that will not fail to move the viewer.  She left us far too soon, but we do have this picture to which to remember her by. 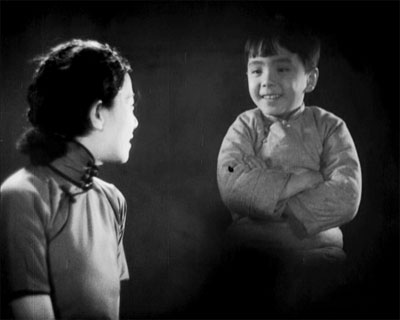