Two Arabian Knights has the distinction of being the only Best Comedy Director Oscar winner.  At the first Academy Awards, the Directing category was split between Drama and Comedy, but the following year Comedy Directing was retired and there was just one Best Director.  Curiously, the Comedy Directing winner, Lewis Milestone, would go on to win another Best Director Oscar for another World War I film, one as far from the hijinks of Two Arabian Knights as imaginable (the searing drama All Quiet on the Western Front).   Whether it is good or bad to separate comedy and drama at the Oscars I cannot say, given the Academy's penchant for thinking it takes greater talent to make a drama than it does comedy.  Two Arabians Knights isn't that funny, though it does set a comedic template: the mismatched pair who find themselves in all sorts of scrapes but who end up as loyal friends.  There are funny moments, and I personally think it might be good to do a sound remake, for the film has strong possibilities.

France, 1918.  As the First World War is drawing to a close two American soldiers find themselves trapped behind enemy lines.  Sergeant Peter O'Gaffney (Louis Wolheim) aka "Taxicab Pete", and upper-crust Private W. Daingerfield Phelps III (William Boyd) decide to fight it out when Private Phelps has had it with O'Gaffney's bullying.  They get so into it that they don't notice the Germans have them surrounded.  Taken prisoners, they form a friendship when Phelps stops a German from attacking the Sergeant for a caricature Phelps had drawn and when the criminal O'Gaffney returns a bracelet of Phelps' the Germans had taken.  They hatch an escape plan, and use white robes to mask their uniforms in the snow.  However, they end up getting recaptured, but the robes cause the Germans to mistake them for Arabs, and they are repatriated to Turkey.

On the train to Constantinople, the two make another daring escape (with O'Gaffney always reluctantly following Phelps' lead).  They find themselves as stowaways aboard a Turkish ship, but Phelps has secret cash in his shoes to bribe the captain.  Aboard the ship, the two Americans attempt to one-up each other in pranks, until they spot a sinking vessel.  Phelps attempts to rescue a veiled lady, but does such a cock-up of it that O'Gaffney has to rescue BOTH of them.  They find the woman is the Princess Mirza (Mary Astor).  She is romanced by both of them, but the patrician (and better-looking) Phelps manages to be more successful in his wooing, especially since he's the more educated of the two.  To their surprise, Mirza speaks English (having been educated in Constantinople), but she is betrothed to Shevket Ben Ali (Ian Keith), an arranged marriage, and she is taken back to Constantinople aboard his ship.  The two soldiers are forced to hightail it when the captain discovers that Mirza has not really paid for her passage, but that the soldiers robbed the ship's purser (Boris Karloff...yes, THAT Boris Karloff) and passed that off as payment.

Mirza has promised that her father would pay them back their kindness, but a servant informs both the Emir and Ben Ali that Mirza has removed her veil to one of the Americans.  Outraged, Ben Ali swears both must die.  Unbeknown to them, Phelps and O'Gaffney first try the American consulate, but find the ship's captain is waiting there.  Then they try the Emir's palace, but find Mirza's warning too late.  It looks like it's curtains for our leads, but they make yet another daring escape.  Phelps, now in love with the beautiful princess, tells O'Gaffney he can go if he wants, but Sarge won't abandon his friend and says he'll help him in the rescue.  They, despite being outmanned and outgunned, manage to eventually defeat Ben Ali and spirit Mirza off into the night, our Two Arabian Knights having triumphed over the Ottomans.

As I said, I think Two Arabian Knights could be remade into a sound film.  There are certainly elements within it that are highly amusing.  Of particular note is the interplay of Wolheim and Boyd as the mismatched criminal and WASP private.  From the beginning, when Phelps decides that since his life is over, he's going to knock the Sarge down, we see that this is not going to be a searing drama about war.  Instead, Two Arabian Knights is indeed a comedy where the humor comes from a genuine fondness that grows between the two men.   Not that their fondness won't allow them to try underhanded jokes and tricks on the other.  For example, O'Gaffney decides to get Phelps' clothes wet (again) to stop him from seeing the beautiful Princess while O'Gaffney's are all but dried.  Phelps, not to be outdone, tries to stop O'Gaffney from leaving his room by making his trousers disappear (something he forgets about when he sneaks to see the Princess).  How does Phelps manage this trick?  Simple: he left wearing BOTH pairs of pants.

Sometimes though, the comedy comes less from hijinks than from necessity.  At one point in their escape, O'Gaffney is about to sneeze and reveal they are hiding in a stream they fell into.  To stop him from sneezing, Phelps punches him unconscious.  To revive him, Phelps dunks O'Gaffney's head into the water.  O'Gaffney is genuinely puzzled as to why Phelps belted him.  Later on, O'Gaffney punches Phelps when he rescued both Phelps and Mirza from the water.  When Phelps asks him why, O'Gaffney coolly replies he thought Phelps was about to sneeze.

Boyd and Wolheim make an excellent double-act.  The former uses his admittedly good looks to be the dashing, lovestruck patrician, the latter uses his face to convey O'Gaffney's less intelligent but street-savvy figure.  Sometimes things have to be explained to O'Gaffney (like what a eunuch is), and his reactions are priceless.  It's interesting that Louis Wolheim isn't as remembered as he should be given what range he had.  Just as he was light as the dim-witted but shrewd and loyal O'Gaffney in Two Arabian Knights, he was also equally effective as the tough gangster in another once-thought lost film, The Racket, and he was excellent as the cynical but tragic officer in All Quiet on the Western Front (a film that I admit to openly weeping at).

Mary Astor was also excellent in her role as the demure Princess Mirza, who speaks English perfectly and who has great interplay with both the comedic turn of Wolheim and the romanticism of Boyd. 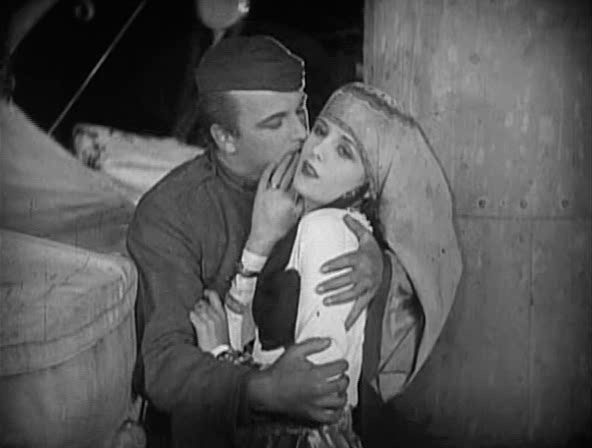 I can see why Milestone won Best Comedy Director, for some scenes within Two Arabian Knights are simply beautifully rendered.  The scene where Mirza finally removes the veil is almost erotic, and he has great camera work for example when we have overhead shots of the two soldiers crashing into the hay being loaded onto the ship.  The opening shot of the battle ending with the two Americans staring in disbelief at the group of Germans surrounding them is also both beautiful and comic.  We even get some quite risqué moments, as when O'Gaffney attempts to milk a goat only to sadly declare it was the wrong kind of goat.

It's almost all subtle and understated, allowing the viewer to suspect something without having to give too much information.

Credit should also be given to Robert Israel's new score, which seamlessly includes such WWI standards as My Buddy (which was about male friendship) into the score.

As wonderful it is to have Two Arabian Knights with us, despite the very best restoration work possible, we can see in the only surviving print the ravages of time.  Once listed as a lost film, it was discovered along with both The Racket and The Mating Call in the vaults of its producer, legendary eccentric billionaire Howard Hughes (the subject of Martin Scorsese's The Aviator).  Sometimes the print becomes almost impossible to see, the images almost all but lost to the viewer.  It's sad the print has some real extensive damage to the ravages of time, making it almost impossible to see.

I think Two Arabian Knights was probably funnier back then than it is now.  It's not without its charms, and in particular Wolheim make it a delight and much more fun that it should be.  There were clever moments, and though sometimes the film dragged a bit I think people who enjoy silent films and those who wish to see actors go for something different (and succeed) will enjoy some time with Two Arabian Knights.

I really hope someone gets around to remaking it...