Gotham: The Anvil or the Hammer Review 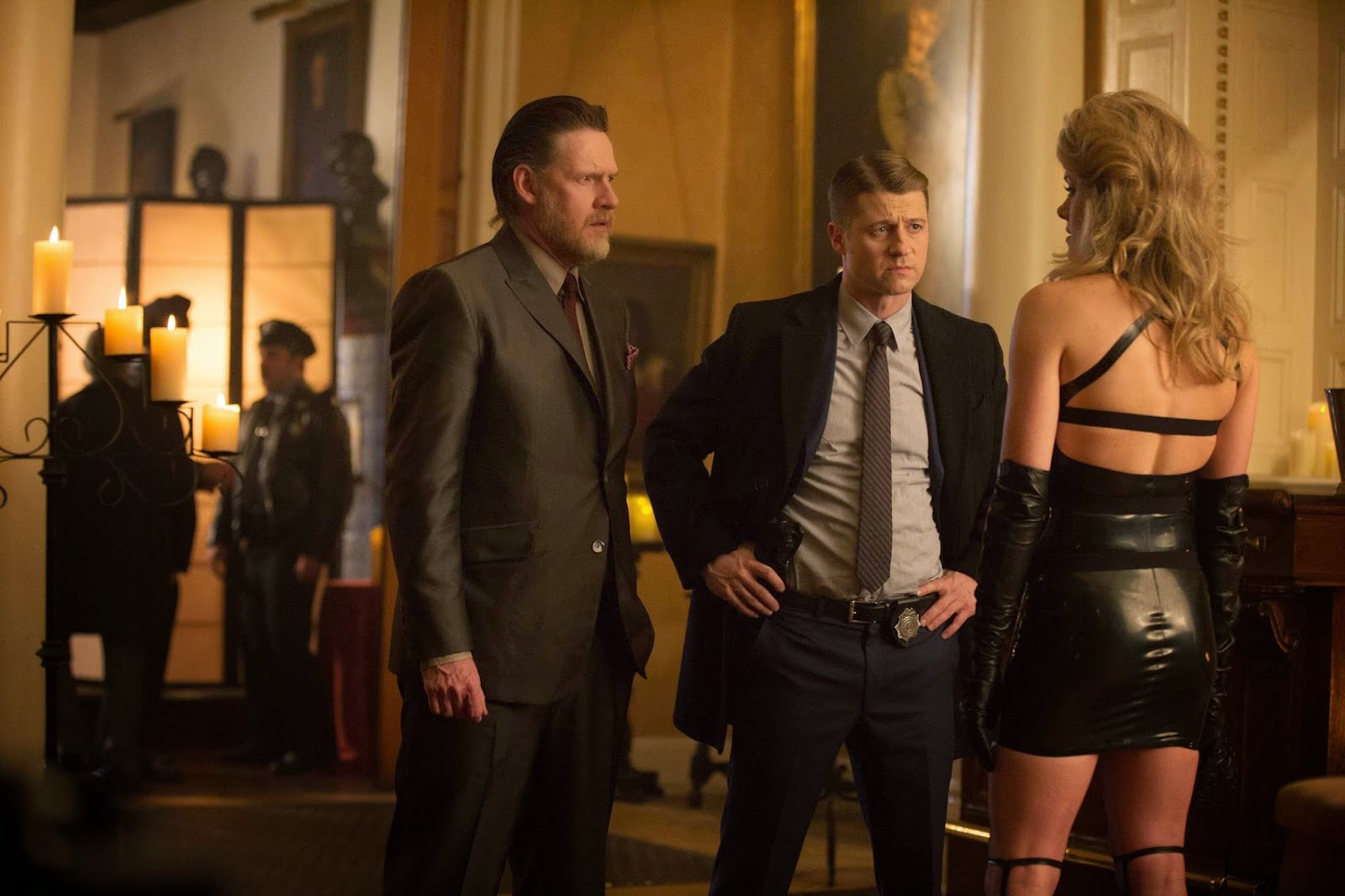 GOTHAM: THE ANVIL OR THE HAMMER

The first time I watched The Anvil or the Hammer, I was completely blown away by the sheer amount of crazy on Gotham.  Serial killers!  Sex clubs!  Industrial shenanigans!  Mob wars!  Beheadings! Lucius Fox!  Sex acts so shocking even jaded, cynical Detective Harvey Bullock (no virgin himself) was horrified!  It looked like Gotham was throwing everything and a kettle of fish at the stories.  I was thrilled and declared it the best episode of the season, with one more to go.  At the second viewing, a bit more rational, I still think it is a great episode, and maybe the best of the season.

Jason Lennon aka The Ogre (Milo Ventimiglia) has completed his seduction/abduction of Barbara Kean (Erin Andrews), Jim Gordon's ex.  Holding her hostage in his "grey room of pain", he is now completely convinced that they are the perfect couple.  He tells her to choose the next victim, and she chooses her WASP parents.  Jim Gordon (Ben McKenzie) and his partner Harvey Bullock (Donal Logue) eventually do find them, though it requires some bizarre investigative turns.

Those turns involve getting Oswald Cobblepot, The Penguin (Robin Lord Taylor) to get them an invite to the Foxglove Club, an exclusive brothel in the Eyes Wide Shut style.  A witness placed the Ogre there, and it's hoped someone knows something about his whereabouts.   This invite comes at the promise of a favor for Penguin to be determined later. Both detectives decide that Bullock should go (as Gordon is much too square to pass as a client of a whorehouse).  Bullock isn't fazed by the goings-on, until we get to the stage show.  Whatever went on there is so shocking even the usually blasé Bullock is shocked, arresting everyone on sight, "especially you two" (referring to Ingrid and Garrett, the two performers of the unspeakable act).  One of the prostitutes who works there gives them a clue to track Lennon down, but while it's too late for Mr. and Mrs. Kean, they do manage to rescue Barbara and kill Lennon.

In the other subplots, Ed Nygma (Cory Michael Smith) disposes of Officer Dougherty's body, repeating to himself, "No body, no crime".  He however, can't resist giving Dougherty's sweetheart Miss Kristen Kringle (Chelsea Spack) a clue about what really happened.  Nygma secretly sends Kringle a note from "Dougherty", a Dear Jane-type letter.  Nygma tells her to 'read between the lines', and we learn that the first letter in each line spells out his name.

Penguin, for his part, has his own master-plan.   He hires Falcone assassin O'Connor (Clark Carmichael) to kill Don Maroni (David Zayas), but O'Connor and his henchmen find their guns jam.  An enraged Maroni, thinking Falcone was behind this, kills O'Connor (and sends his head to an unsuspecting Falcone), unleashing a full-scale mob war Mexican-style.

Finally, Bruce Wayne (David Mazouz) attempts to find the incriminating information about Wayne Enterprises criminal activity, but is thwarted by Sid Bunderslaw (Michael Potts), who was aware that Bruce was coming.  He tells Bruce that his father and grandfather knew of what was going on but kept quiet.  He also directs a new junior executive, Lucius Fox (Chris Chalk) to escort Master Bruce out.  Fox gives Bruce a cryptic message about how Thomas Wayne was a 'true Stoic', and advises caution.

The Anvil or the Hammer again manages to keep a steady balance between each story, though primary emphasis is giving to wrapping up the Ogre storyline.  This surprised me a bit in that I expected it to be part of the series finale but we still got some wild twists and turns with this story.  This is helped tremendously by all the performances, particularly McKenzie and Logue, who make the desperate search for Barbara and the Ogre real and intense.

Logue in particular is a standout (as he really has been, the perfect counterbalance to the square-jawed rectitude of McKenzie).  There is an element of comedy, subtle as it was, when Bullock witnesses a sex act so obscene, so shocking, that even he is appalled.  Not only is this particular sex act so horrifying that shadiest (but apparently clean) cop in Gotham City reacts with disbelief, but actually causes him to behave like a policeman and order everyone's arrest.

It's interesting to speculate as to what so shocked Bullock.  Putting that on repeat I heard chainsaws and squealing pigs, so my guess is that there might have been bestiality involved, with some torture thrown in for good measure.

Ventimiglia played the part correctly: cool without being full-on American Psycho with a little Fifty Shades of Grey thrown in, which I think worked well.  Even Andrews, almost universally despised for her Barbara, got a few moments in (though whether she was drugged or just behaved as if she were out of it remains to be seen).

Much more impressive was the Bruce Wayne storyline (and not because Bruce met Lucius Fox for the first time).  I can't say much about Chalk in this because he was on-screen for less than five minutes and it's impossible to make a judgment on that.  However, we at least get the introductions out of the way, leaving open the possibility that Fox will have a more expanded role in Season Two and beyond.  Mazouz, however, continues to shine as Bruce, his heartbreak about learning that his dad wasn't the man he thought he was mixed in with his honesty to Alfred (Sean Pertwee) about what happened to Reggie.

Mazouz, despite not being the main character in Gotham or The Anvil or the Hammer, I think pretty much stole this episode and has done a fantastic job with bringing Young Master Bruce to life.

Even though their parts were smaller, both RLT and CMS did their usual excellent work.  We get great twists with Penguin's storyline, and the fact that Penguin still is courtly, almost polite, but ruthless just shows how well RLT has done with this role.  CMS too did well in making Nygma both sympathetic and almost arrogant (signaling to Kringle almost as a taunt about the clue he left behind).  His recreation of Hamlet with Dougherty's skull is both fascinating and wildly creepy, a man unhinged beyond repair and no one knowing it.

As a side note, I would love to go to Oswald's, because they seem to have really good bands perform there.

What is interesting is that The Anvil or the Hammer now gives us exactly one episode to wrap some things up before we go into Season Two, and it does make me wonder whether the show kind of had one too many fillers between when we could have had a better pace towards the mob war now unleashed.  Just how things will end are still a bit up in the air, but if Gotham had had more episodes like The Anvil or the Hammer, it would have been a stronger season.

Still, on the whole it's nice to see Gotham finding its way, putting things together with various stories that don't overwhelm each other, that keep things rolling, and that keep the show dark but still accessible.

Next Episode: All Happy Families Are Alike