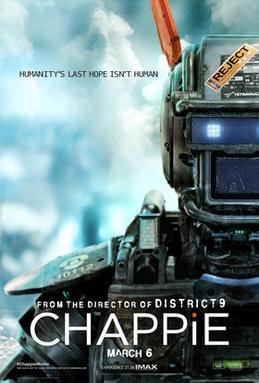 On an episode of Are You Being Served?, there was a tagline used regarding a gift with the purchase of perfume/cologne.  "Keep your chappie happy with something snappy".  Would that co-writer/director Neill Blomkamp had bothered to learn that regarding Chappie, his pseudo-intellectual film about artificial intelligence.

In the near future, Johannesburg, South Africa employs a new addition to its police force: robots that handle all the tough and dangerous aspects of law enforcement.  The weapons manufacturer, Tetravaal, is delighted by the J-burg Police orders, especially its head, Michelle Bradley (Sigourney Weaver).  Not happy is Vincent Moore (Hugh Jackman), who finds his own mechanized killing machine reduced time and again in funding.  Vincent is also angry at Deon (Dev Patel), who is the genius of the robotic force.

Deon is secretly working on creating full artificial intelligence, and by luck Robot #22 is about to be scrapped due to extensive damage.  It is the perfect machine to try out his successful AI system.  Unfortunately, the same criminals who damaged #22 are now on Deon's trail.  A super-thug named Hippo (Brandon Auret) has given two minor thugs, Ninja & Yolandi (played by Die Antwoord rappers...Ninja & Yolandi) 7 days to come up with 20 million rand or else.  Yolandi comes up with a great plan: use robots to rob.  Rob...robots...it all works.  They need the genius who came up with the police bots, and Deon is abducted.  They find the robot and decide to use Deon to rework the bot.

Enter "Chappie" (Sharlto Copley).  At first our Robotic Frankenstein is frightened (easy with Ninja, who is too busy acting all thug to notice that he doesn't have as he calls it, "a retarded robot").  With a little love from Yolandi, Chappie starts finding a strange life: part innocent, part gangsta. 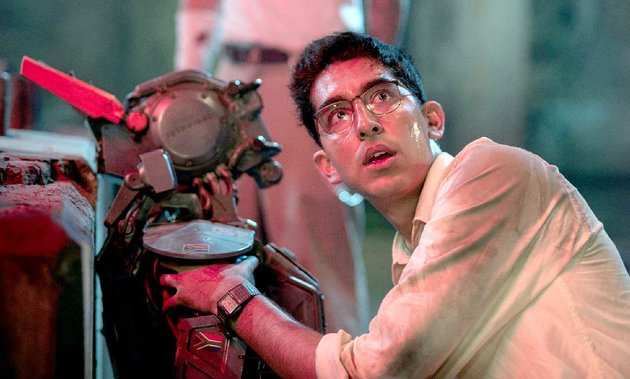 To toughen him up, Ninja leaves the sheltered Chappie among a group of thugs, who once realize he's no threat, set him on fire.  Chappie is also tortured and his major chip taken by Victor, who has learned about the AI project.  Chappie struggles to find both his "Mommy" and "Daddy" and/or his "Maker", which gives him contradictory instructions about obeying/breaking the law.

Victor uses the chip to disarm and disable all the Robo-Cops, causing total chaos on the streets.  No matter, he's got his monster machine that he can control to save the day.  Chappie, who is shocked to find he's been tricked into committing 'the heists', now joins his 'parents' and 'maker' to save the day against Victor and his MOOSE machine.  Deon is injured, Mommy is killed, Hippo I think is also blown away and Chappie is able to transfer Deon's consciousness into another machine.

Near the end of Chappie, I wrote in my notes, "How long is this piece of crap?"  It isn't that Chappie doesn't have some good ideas trying to float upwards, but it got lost in two things: big explosions and a horrible character.  Chappie tries to make its main character endearing, but he just comes across as insipid, with all his talk about "Mommy" and "Daddy", in the child-like sing-song voice Copley adopted.  You don't end up liking Chappie, but end up cheering Victor.

It is hard to take Chappie seriously when you've got this robot speaking in gangsta lingo and wear bling all around his neck.  It comes across as totally comical and illogical, and if the effort with this was to make Chappie more family-friendly, that bombed.  The rather excessive amount of explosions and violence goes against the cheerful, innocent vibe they are trying with Chappie.

Poor Jackman, hamming it up as the villainous Victor and leading to such questions as to why Victor could pull a gun and force Deon's head down on his desk in front of everyone and be allowed to laugh it off as a joke.  I know SA is violent, but this is too much...

It also makes me wonder why Ninja and Yolanti played characters named Ninja and Yolanti.  Are they playing themselves?  Are they so untalented as actors that they wouldn't be able to respond to other characters' name?   It's almost sad to see Yolanti, a rapper known only in South Africa, give a better performance than Wolverine.

Blomkamp I think wanted to try and make another allegory about what makes one human, and the idea that one can transfer their conscious and cheat death is interesting.  However, the hows are a little blank, and worse, all I could think about is not, "Oh, wow, our essence can be moved to a machine", but "Oh, wow, Deon is condemned to live inside a machine, meaning sex will be really, really tough".   How are they really going to procreate after everyone is uploaded?  Who decides who is good enough to be uploaded?  Will this allow a mad scientist or dictator to take over the world?

Well, I found Chappie to be a film that thinks it's saying something, but only succeeds in being funny without meaning to. A gangsta robot wearing bling but still blathering about how "Daddy lies" CAN'T be taken seriously.  Blomkamp has one more shot at redemption to make good the promise of District 9.

Pity that promise is for the new Alien film.