Season Two of the Batman prequel Gotham is subtitled Rise of the Villains.  One wonders what villains these are, since it seems that so far, it is a very strange amalgamation of beings who've dubbed themselves Maniax that are rising.  Knock, Knock, our second Season Two Gotham episode, gives us an even darker world than usual, sometimes going surprisingly violent.  We get a raid on Gotham City Police Headquarters (seriously, how corrupt/inept are the GCPD) and some wild turns from formerly hated characters who now appear to have been headed on the right track.

It also gives us some surprisingly sad moments that make the never-ending struggle to make Gotham into a decent place seem something even Sisyphus wouldn't touch.

James Gordon (Ben McKenzie) has been appointed to head up the Arkham Asylum escape investigation by now-Commissioner Essen (Zabryna Guevara).  That investigation won't be too hard in certain ways: the escapees, now known collectively as the Maniax, are creating panic throughout the city.  Their first big splash is by throwing people off the Gotham Gazette building to spell out their name.  Their second is to attempt to set a group of high school cheerleaders on fire.

If nothing, the Maniax aim big.

Obviously, you weren't going to see a bunch of high schoolers receive the ISIS treatment, and in the fight between them and the GCPD one of the Maniax, rapist Arnold Dobkins (Will Brill) is killed off, but not by the police.  It is Tabitha Galavan (Jessica Lucas), adopted sister of criminal mastermind Theo (James Frain) who pulls the trigger, to keep him quiet.  One down, many to go. 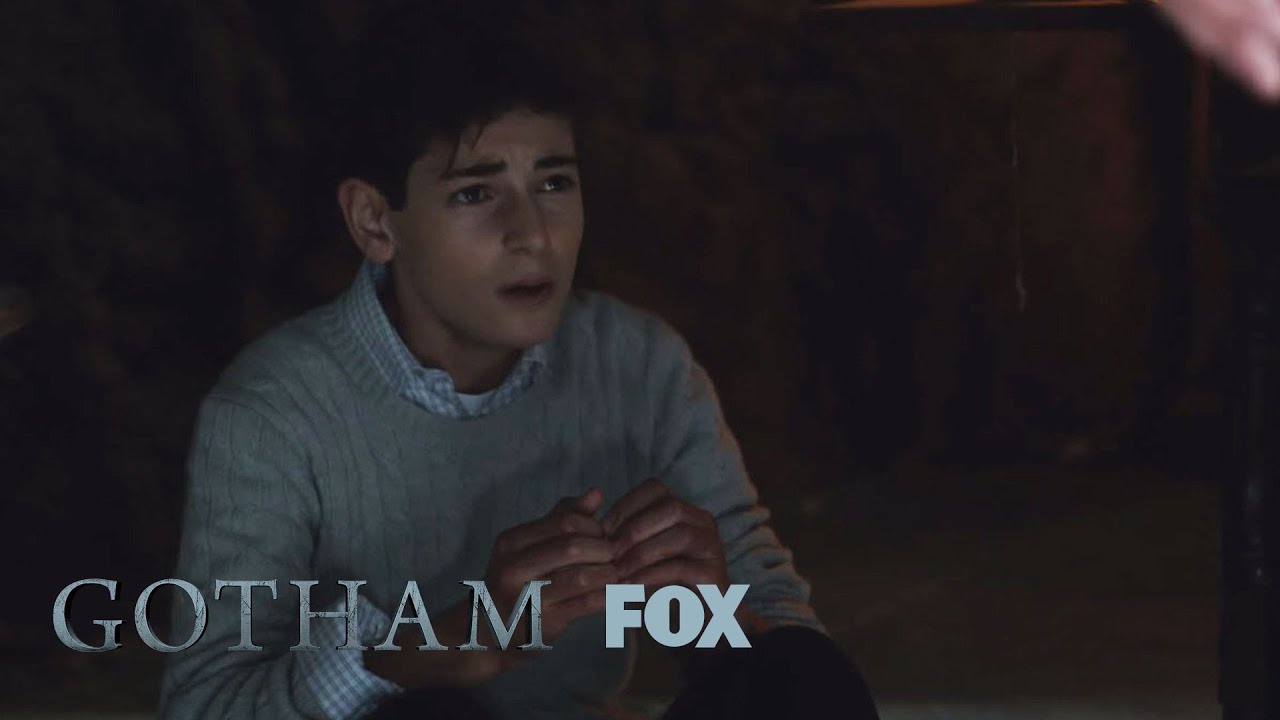 Meanwhile, back at Wayne Manor, young Master Bruce Wayne (David Mazouz) is coming close to uncovering his father's secret files when Bruce's manservant Alfred (Sean Pertwee) smashes the computers to bits, for Bruce's own good.  Bruce, furious, does the unthinkable and fires Alfred.  However, in truth their bond is too close to really break, and Bruce asks Alfred to come back.  A deal is struck: Bruce must be totally obedient to Alfred's words, but in return Alfred has to get the computer fixed.  For that, he turns to Lucius Fox (Chris Chalk), the tech whiz who had directed Bruce to uncovering Thomas Wayne's secret lair.  Fox agrees to help and is taken into their confidence.

Gordon is determined to bring the Maniax in, though he can't persuade his old partner Harvey Bullock (Donal Logue) to come back to the force.  Neither can Edward Nygma (Cory Michael Smith) convince the luscious Miss Kringle (Chelsea Spack) to give him the time of day, even though he tries.  Ed is slowly splitting into two people, much to his horror.  Still, things cannot wait, especially when Bonkers Babs (Erin Richards), another Maniax, lures Gordon away from Police Headquarters.  A full-scale massacre occurs, with Edward barely able to leap and push Kringle down before she's struck down (though he's injured in the assault).  Jerome (Cameron Monaghan) the leader of the Maniax, delights in the slaughter, and holds Commissioner Essen prisoner.  In the end, Jim is too late to save her, as he and his girlfriend Dr. Leslie Thompkins (Morena Baccarin), who hid during the chaos, find her shot.  "A new day," the Commissioner says before dying.

Bruce comes in, feeling better that Gordon survived.  Also arriving is Bullock, who finds that his nature brings him to avenge Essen, whom he genuinely admired.  The killers left a video tape, where Jerome makes clear that "you ain't seen nothing yet".

I was surprised by the level of violence in Knock, Knock.  From the opening when we get Mayor Aubrey (Richard Kind) held prisoner by means of his head being locked up, to the tossing off of bodies, the near-immolation of teens, and the final slaughter at the GCPD headquarters that makes Dynasty's Moldavian Massacre seem like a Waltons Christmas special.  Gotham pushes as far as it can for a network television show regarding violence...and then some.

I marvel at just how much Gotham puts into it.  A part of me was uncomfortable with the bus hostage scene, as if we were entering dangerous waters.  I knew that no network would dare show something as gruesome as kids on fire, but still, when they're all doused with gasoline and the lighter kept failing, I worried things were going too far for me.

One had to find the laughs where one could, and oddly, the funniest moment came when Alfred is recruiting Lucius.  The way it played out, one almost thought Lucius had wandered into a gay bar, with Alfred practically hitting on him.  It was a bit amusing to me, but a logical way to bring Lucius into the Bat-fold. For better or worse all future Jokers fall under the long shadow of Heath Ledger's take on the character, and Cameron Monaghan is no exception.  His Jerome channels Ledger's Joker with the maniacal laugh, lunatic grin, and wanton bloodlust.  Whether its trying to kill a bunch of kids or cruelly getting rid of Commissioner Essen, Monaghan clearly is influenced by Ledger.

No longer will we have gleeful Cesar Romero-types who were just in it for a good laugh.  No, today's Clown Prince of Crime is clearly in the 'psychopathic anarchist' mindset.  It doesn't take away from Monaghan's excellent take on such a larger-than-life role.  I confess to not caring for his take (that Ledger thing), but bless Monaghan: he is making the character his own.

It is sad to see Guevara leaving given how good she was, but she too was wonderful throughout, whether it was in her confrontation with Jerome or with her final scene, Guevara will be much missed.

In his too-brief scenes, CMS is juggling the dual roles of the somewhat-rational Edward and the growingly irrational and aggressive future Riddler quite well.  Mazouz (who proves once and for all that Bruce Wayne is a hugger) really does fine work in balancing the future Batman with the still unsure young man that Bruce is.  Seems almost a pity the show isn't about Bruce's evolution into Batman, for Mazouz is creating such a wonderful characterization of Young Master Bruce.

I have to give credit where credit is due: Erin Richards is phenomenal as Barbara Kean (or as I call her, Bonkers Babs).  She's gone from the most hated to the most intense character, as if playing a psycho allowed her to breathe new life into a dull character.  From her push to 'let the girls in' on the fun and games to her cold manner with her ex, Richards makes Barbara into a villain the equal of Jerome.

The negative though is that Baccarin, one of the standouts from last season, seems to be lost in the shuffle.  She seems to have been downsized, which pleases me not; or at least I hope that this was just for this episode and not the rest of Season Two, for Baccarin is not just a personal favorite but her character is one of the bright spots in a dark and gloomy world.

I think the violence is what makes me downgrade this episode a bit.  It just didn't sit well with me.  However, it looks like the problems Gotham had at the beginning (a lack of focus, too many villains and stories going all over the place) have been if not completely corrected at least addressed.  This first half of Season Two is turning out to be as dark and tense as promised.

Let's see whether we get things rolling further in the right direction or our Bat radar goes way off track.

Next Episode: The Last Laugh