Who ever thought it would turn out this way?  After months of teasing, we get a real surprising twist regarding the character of Jerome on Gotham, the Batman prequel series.  Long touted as the potential Joker, the most iconic of Batman villains, The Last Laugh figuratively if not literally brings down the curtain on our redheaded kid with the anarchic mindset and maniacal laugh.  As we are only on our third episode of the second season, the fact that Jerome isn't going to be THE Joker I think left all the viewers pretty much stunned.  There is a certain logic into how all this played out, and perhaps I'm giving the writers/producers of Gotham a bit too much credit into their insights of evil.  However, I can't find much if anything to fault in The Last Laugh, an episode that went all-in and makes no apologies for it.

Detective Jim Gordon (Ben McKenzie) has adopted the interrogation style of his returned partner, Harvey Bullock (Donal Logue) in his single-minded effort to bring Jerome Valeska (Cameron Monaghan) to justice.  Jerome, along with Jim's ex Barbara Kean (Erin Richards) are now going to take part in a master plan orchestrated by Theo Galavan (James Frain) to return to prominence in our unfair city.  His sister Tabitha (Jessica Lucas) has found Barbara's 'charms' very intoxicating, but that doesn't mean Babs isn't above maybe being equal with both Galavan siblings.

Meanwhile, Bruce Wayne (David Mazouz) finds himself the most reluctant of philanthropists when he's dragged to a Children's Hospital Charity event by his manservant, Alfred Pennyworth (Sean Pertwee).  The event, hosted by Dr. Lee Thompkins (Morena Baccarin), appears to be going well.  Little does she or anyone know that Jerome and Barbara have crashed the magic act.  Alfred is too busy flirting with Lee, and Bruce is too forlorn regarding Selina Kyle (Camren Bicondova), who has crashed the party to do a little pickpocketing.

Jim and Harvey are being led around on a wild goose chase to find Jerome, who has killed his father, the Blind Fortune Teller Paul Cicero (Mark Margolis), who predicts his son will be a curse on Gotham and will bring darkness and death.  Jerome has framed his father as being the brains in the bust-out from Arkham Asylum, but Gordon doesn't believe that.  He DOES believe Lee when she calls, realizing that Barbara is the Magician's Apprentice (a little Doctor Who reference there). The charity event erupts in chaos when "The Great Rodolfo" reveals himself by killing the Deputy Mayor and holding everyone hostage.  In the confusion and chaos, Bruce chases after Selina, who manages to help him go through a secret passage that allowed her to enter unnoticed.  However, Bruce will not think of his own safety and goes back to try and save Alfred.  Jerome wants to now kill the rich little orphan, but Gordon, having spotted Selina, has entered the ballroom.  Gordon, with help from Alfred, tries to stop the hostage situation, but by now Jerome has a knife to Bruce's neck and is making a cut into it.

It's now that Galavan, apparently having been knocked out by Bonkers Babs, emerges and stabs Jerome in the neck, leaving our merry murderer seriously stunned at the turn of events.  It was all part of a larger plan which Jerome has played his part in.  Babs manages to make a dramatic escape, but Bruce, Lee, and all the other hostages are safe.  Galavan appears to be heroic...which is all part of the plan.

Watching all this at home is Oswald Cobblepot, aka The Penguin (Robin Lord Taylor), who bemoans 'chaos for chaos' sake' but wonders if he should adopt a distinct laugh himself.  Bullock goes to him, making it clear he won't stand for anyone doing anything to his partner and mocking Penguin's pretentions of power, telling him that Bullock will always think of him as Fish Mooney's "Umbrella Boy" and watching to see if Penguin does something wrong in order to take his own revenge.  Penguin is understandably enraged by this, but bides his time.

With Jerome dead, we see that the chaos he unleashed has attracted followers, who begin to adopt his laugh and his anarchic killing style, the words of his father ringing out over Jerome's death grin.

Now, my review is a little off because there was a massive thunderstorm in my hometown.  The power didn't go out, but the news interrupted the broadcast at least twice, so some bits (like Theo Galavan's 'courageous' stance against Jerome) were essentially edited out.

Still, I got the gist of The Last Laugh, and it certainly left all viewers visibly stunned.  Just when one had settled into the idea that Jerome was going to be the future Joker, we get him killed off.  This leaves the position of the Clown Prince of Crime open.  Could we really get the future Joker be that failed standup comedian who finds the true meaning of 'a bad day' from the legendary graphic novel The Killing Joke?  Has he really yet to emerge?  It was good of Gotham to tease us with some really wild moments with Jerome, who is almost oddly sympathetic when Galavan literally goes for the jugular.

I had in the beginning not been big on Monaghan's take on "the Joker", feeling it was really close to Heath Ledger's iconic take on the role (and for the record, while I've seen The Dark Knight exactly once, I wasn't Team Ledger when it came to his Joker, though again it's been just one viewing).  Did Monaghan take cues from Ledger?  Perhaps, but let's be honest: all interpretations of The Joker will fall under Ledger's immense shadow until we get another actor who moves away from the twisted dark evil of The Joker.

Having said that, I think Monaghan merits serious Outstanding Guest Actor in a Drama Series for his Jerome, as maniacal and monstrous being as has come along in a while.  I'm sure he won't get nominated (if Robin Lord Taylor's brilliant turn as Oswald Cobblepot in Season One could be so easily ignored, I am hard-pressed to imagine the Television Academy noticing a three-episode arc).  However, the scene where he confronts his father shows the rage, even the hurt, within Jerome, the resentment that created his murderous, amoral being.  The cold manner which he talks to his father, complete with that quiet "Ha, ha, ha" as a counterpoint to the maniacal villain we've seen for all this time is a fine piece of acting.  For most of his time, Monaghan plays what we might think of as The Joker (The Great Rodolfo bit I think being a particular example of this), but when his bloodlust gets the better of him, the shock mixed with disappointment is gripping. 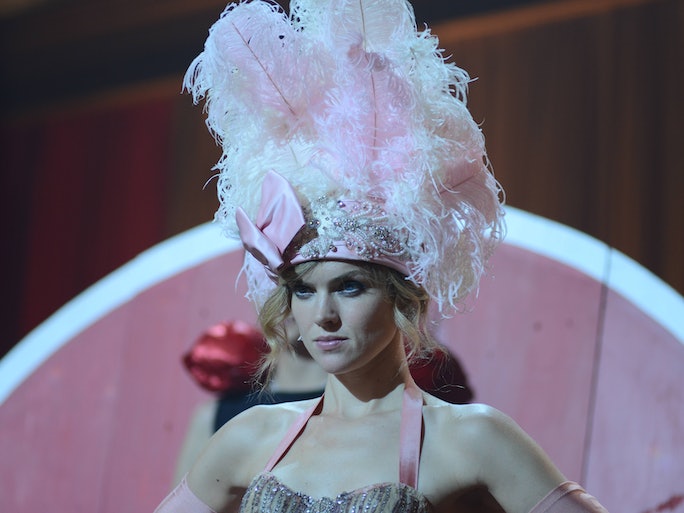 The Last Laugh also has some excellent work from Richards and Baccarin as Bonkers Babs and Lee Thompkins, who finally get to confront each other.  I can't believe that after a season of hating that wimpy WASP Barbara has turned into a fascinating character, embracing her insanity and going full-on bitch mode.  The confrontation between Babs and Thompkins is tense and really weird, and her fast escape was as dramatic and looney as anything she's done.

Is Frain a bit over-the-top as the villainous Galavan? Maybe, but we're seeing how he carries that on in future episodes. Pertwee's flirtatious performance, Mazouz's conflicted one, and the double act of Logue and McKenzie are all also so brilliant.  I don't think there was a bad performance, even in smaller roles like with RLT, whose one scene shows that rage within Penguin, a man who thought briefly he was on top but with just the mention of his humble roots unleashes his insecurity.

In terms of the story, I was surprised that The Last Laugh could serve as commentary on the plague of truly repulsive figures finding fans and imitators.  You think of all these killers who imitate others, of how murderers can have fans, and think, just how real Gotham could be to find that someone as monstrous as Jerome could find people willing to follow his example.

We even get bits of foreshadowing.  When The Great Rodolfo ends his magic bit with Bruce with the sawing-in-half-trick, he makes what appears to be a joke.  "Some people say Bruce has a split personality", the pun of being sliced in half hanging in the air.  Little does he know that he is accurately describing the real dichotomy between millionaire philanthropist playboy Bruce Wayne and his stern, serious alter ego Batman.

I think Jerome's death and the ending to The Last Laugh has led people to think that perhaps the future Joker will be merely a Jerome copycat.  I don't know if that is what will happen (though at the moment, I doubt it).  It is a loss that what had become a highlight of Gotham is now no more, but The Last Laugh delivered all-around brilliant performances and an excellent story (though granted, the 'hostages at big event' scenario wasn't the most original).  I am still surprised at the violence on Gotham (The Blind Fortune Teller got stabbed in the eye!) but in terms of performances and story, The Last Laugh delivered.

Next Episode: Strike Force
Posted by Rick at 12:01 PM