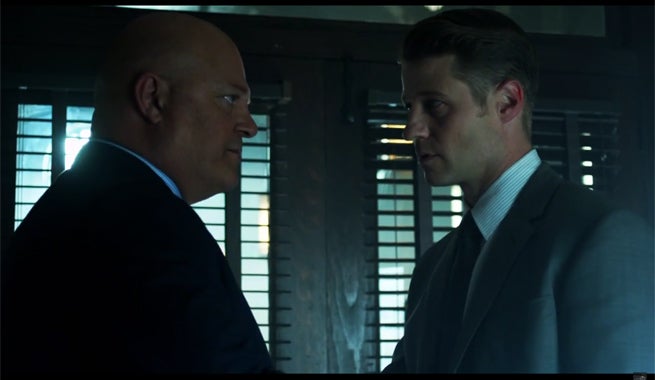 Things are starting to pull themselves together on Gotham with Strike Force.  We're starting to get the thrust of several stories: the rising of Theo Galavan, the threats to The Penguin, the struggle of Detective Jim Gordon to balance his high morals with the darkness of his past, and even the love lives of both Gotham City Police Department forensics officer Edward Nygma and millionaire orphan Bruce Wayne.  That's a lot for an episode to carry, but Strike Force does it well, with perhaps one big flaw.

Theo Galavan (James Frain) is using his killing of Jerome to launch a mayoral bid (the current Mayor having disappeared without a trace apparently).  There are two others officially running to his yet-undeclared candidacy: idealistic Councilwoman Janice Caulfield and union boss Randall Hobbs.  Theo wants them eliminated, and once in power he will bulldoze a major part of Gotham to build his own mass construction plan.  He 'asks' Oswald Cobblepot, aka The Penguin (Robin Lord Taylor) to help him by killing his rivals (and taking a shot at him, missing of course).  Penguin isn't interested, but Theo and his bitch of a sister Tabitha (Jessica Lucas) have an ace up their sleeve: Gertrude Kapelput (Carol Kane), whom they are holding prisoner.  If Penguin doesn't do as he's told, it's kaput for Kapelput.  A frightened/enraged Penguin has no option but to do as he's told. 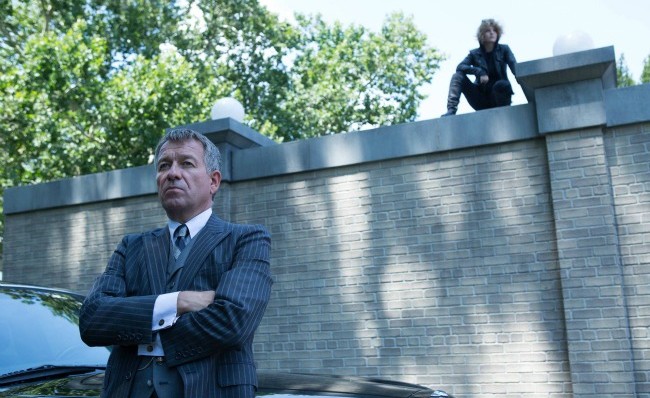 Penguin kills Councilwoman Caulfield himself and sends his master assassin Victor Zsasz (Anthony Carrigan) to take care of Hobbs, but the Strike Force gets there and stuns Zsasz by actually hitting him (though not killing him, of course).  Gordon is putting things together but can't figure why Penguin is getting into this, for Oswald is keeping quiet in his efforts to save his mother.

On other fronts, Bruce Wayne (David Mazouz) is starting his training from Alfred (Sean Pertwee), who makes him run back to Wayne Manor on his first day back at his prep school.  Alfred also bitch-slaps Selina Kyle (Camren Bicondova) for what she did to his friend Reggie and warns her to stay away from Bruce.  Bruce does have a new potential love interest in Silver St. Cloud (Natalie Alyn Lind), who happens to be Galavan's step-niece. Ed Nygma (Cory Michael Smith) for his part, finally gets Kristen Kringle (Chelsea Spack) on a date to his house, and it looks like our future Riddler won't remain a virgin for long.

We end with Penguin desperate to find Gertrude and Barnes deciding it's time for the Strike Force to take down The Penguin.

Strike Force has at least one big strike against it (no pun intended).  That is its cinematography.  Normally, one of Gotham's greatest strengths is its visual style, and Strike Force in some places is fantastic (the brutal slaying of Councilwoman Caulfield is shocking yet brilliant in its look).  However, this is the first time when it went too dark visually speaking, to where sometimes I found it hard to see what was going on (the shoot-out between Zsasz and the Strike Force being one of them).

I also wonder about a big plot point.  So, I'm suppose to believe that Oswald Cobblepot never thought to have Gertrude protected, a secret bodyguard for Mama Kapelput?  I thought that made him rather stupid, the idea he would never realize anyone who wanted to go after him would go to the his one real vulnerable spot.  It also makes me wonder about Galavan's intelligence.  Sure, he could hold Gertrude hostage, maybe even kill her.  However, should he do that, does he think that Penguin would stand quietly by? Far from it: he would come at them with an uncontrollable rage and fury, capable of burning down the whole city to get at both of them (particularly Tabitha, whose manner is particular arrogant and condescending to the King of Gotham).  Penguin Unleashed would be a greater terror than the Galavans put together, so in case they don't know it, they are playing with fire.

I also wonder why Galavan wouldn't think others think it odd that the two other candidates end up dead.  I don't think it's a particularly well-thought out plan, but I'm not a master criminal. Other elements (such as the mayoral campaign and the building of a new team) is a little cliché in my view.

However, Strike Force has some positives.  Chiklis comes in storming as Barnes, the equal to Gordon in his integrity.  It's almost as if we have parallels: Gordon working for Barnes, Penguin working for Galavan, with both not just on opposite sides but opposite motives.  It sets up a wonderful dynamic that hopefully will be used more in the future.

It's also good to have Robin Lord Taylor back in the game.  He seemed a bit of a shadow in the first few episodes (and not appearing last week I believe) but now he too is roaring back as Penguin, a man cornered, frightened, but equally enraged at everything.  Again and again RLT proves just how good he is in this part and in general as an actor, and Strike Force looks like the beginning of a comeback.

Mazouz goes from strength to strength, and he and guest star Lind work well together.  Frain was a little campy as Galavan, but the character might be a little campy (the evil 'laugh' he and Lucas shared when watching a powerless Penguin see Gertrude bound, begging that she knows nothing, was a little silly to me).  Lucas is just excellent as the repulsive Tabitha, the woman I love to hate.

In terms of story, Strike Force is building things up well (though oddly, it's a bit of a shame to see Logue's Harvey Bullock almost an afterthought).  Things are setting themselves up nicely, and I worry about Gertrude.  If she's killed or worse, beheaded or some other gruesome act, I will be highly upset.  Something about innocents getting killed strikes me as wrong.   Still, Strike Force continues Gotham's improved season, and with any hope the various elements introduced (including the new Unit Alpha) will be fully used.