Despite my growing albeit flawed Christianity, I am an 'art before theology' film critic.  I look at a film first, not the message behind it (even if I agree with it).  I have been pretty critical of the Kendrick Brothers, Alex and Stephen, in their ouvre of faith-centered cinema.  I have found at least two of the five films they have made to be pretty bad in terms of cinema (Courageous and Facing the Giants). I have not having seen Flywheel and I thought Fireproof was 'competent' (though I should see it again just to be sure).  Alex Kendrick's two other features where his work was just in front of the camera (The Lost Medallion and Mom's Night Out) at least weren't ruined by his amateurish acting.  Maybe ruined by other things, but not at least by him.

We now come to the Kendrick Brothers' fifth film, War Room.  This is the Kendrick Brothers' most polished, most accomplished, most competent film, a massive leap in terms of both their own work and Christian independent filmmaking.  It's by no means perfect.  However, it's a testament to what can happen when writers/director get out of their own way, not make themselves the center of attention, move minorities up-front and center, and acknowledge(albeit in a small way) that there is such a thing as sin.  That may be the biggest miracle in War Room.

Elizabeth Jordan (Priscilla C. Shirer), a successful real estate dealer, has a beautiful daughter, Danielle (Alena Pitts), but her marriage is not.  Her husband, pharmaceutical representative Tony (T.C. Stallings) is a man of the world: one for wealth, status, being Number One, and not ashamed to flirt madly with Veronica Drake (Tenae Downing), a woman he just met while making his latest sale.  In fact, the fact that Tony is married comes as a bit of a twist in the story.

Elizabeth finds she is growing resentful and angry at her husband, and Danielle is the one made to suffer, for her parents give her things but know nothing about her life.  Into her life comes Miss Clara Williams (Karen Abercrombie), a widow who is in need of selling her large home.  Elizabeth's problems are clearly visible, and Miss Clara asks the younger woman to come over to not just discuss business but also her problems.  These problems can be solved through prayer, particularly through a 'war room', a quiet area where Miss Clara can pray and seek wisdom from God. 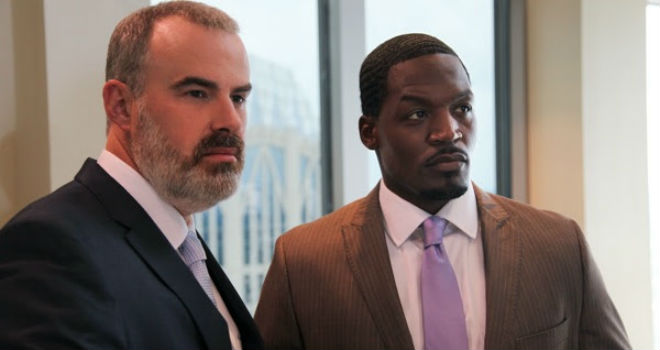 Elizabeth tries her hand at a 'war room', at first with very limited results.  As she grows closer to Miss Clara and grows in her relationship with Christ, things do start turning around for her.  Not so much with Tony, who still is the cock-of-the-walk until his inflated numbers are discovered and he is fired.  With his world crashing, he sees that Elizabeth is not bitter or angry, and Danielle seems to be happier.  At last Tony has his own 'come-to-Jesus' moment, and he too becomes a Christian.

Being a Christian doesn't resolve your problems.  Sometimes it compounds them (don't I know it).  Tony has been secretly keeping extra samples as an informal cushion in case of financial calamity, and now he has a terrible choice to make: live by his principles and return them (even if it means potential prison time) or keep quiet and if not sell them, at least not disclose their existence.  In the end, his newly-found faith convinces him he has to return them, which shocks Coleman Young (writer/director Alex Kendrick), the company head.  The Jordans pray hard about what will happen and are at peace with whatever fate they are handed.  Coleman comes and tells them that he sees the sincerity in Tony and agrees not to press charges.

Things end pretty well for the Jordan family.  Tony, Elizabeth, and Danielle grow closer, and Tony manages to bounce back on his feet with a job at the community center which, together with Elizabeth's income, will keep them from having to shift wildly in their lifestyles.  Speaking of feet, the running gag about how Elizabeth's feet make others gag gets a humorous resolution, and Miss Clara sells her house and moves in with her son, who happens to be the City Manager.  Together, the Jordans in their war room now have a battle plan, and Miss Clara prays for a new woman to come to serve as mentor.

For me, someone who has been highly critical of the Kendrick Brothers collected work, War Room is shocking for many reasons.  Chief among them is that War Room is actually good.  I didn't sense that they were attempting to give us a sermon or treat the fact that there is such a thing as sin as something unnatural or even relevant to a Christian's life.  The curious thing about the Kendrick Brothers is that while they are making Christian-themed/centered films, they stubbornly refuse to acknowledge the existence of sin in their films, let alone entertain the idea that Christians themselves commit sin or are even aware of it.  The Kendricks always go out of their way to imagine a world that exists in a parallel universe, where only unsaved people fell from grace.  Their Christians do not swear, do not have premarital/extramarital sex, drink, use drugs, or if their films are to be believed, even realize such things exist.

That is a far cry from the Christians I know, who not only do that but sometimes even divorce.  In short, the Christians I know struggle between their flesh and their spirit.  The Kendricks version of a Christian has little struggle, let alone such errors of judgment as getting divorced while still going to church, or having a beer, or having real flaws that make them similar, but not exactly like, their unsaved friends and family.

I think their thoroughly unrealistic worldview, one that has the real fallen nature of man as being something 'out there' and removed from their characters, is what always made me wary of looking at their films as good.  War Room changes that because for the first time that I can remember, a married man is sexually tempted and comes close to committing adultery (something that would NEVER happen if Alex Kendrick were the lead...and allow me to be a little mean in saying that the LAST thing we need to see is Alex Kendrick in a love scene with anyone.  Yes, I'm a Christian, but I can be sarcastic and cynical too...in short, a sinner saved by grace and not by my own works).  Tony's lecherous nature and his willingness to sleep with Veronica are handled realistically, which shows to me that the Kendrick Brothers are finally growing up.

Even the resolution that keeps Tony from schtupping Veronica is handled well (Elizabeth prayed for him--the Christian response, and Tony got food poisoning that killed the romantic mood--the 'rational' response).  The fact that they were willing to treat sin as something real that affects people is a step in the right direction (and it might even lead one to wonder if they would be willing to let a Christian character stumble). Another major aspect of War Room that makes this the best Kendrick Brothers film is that they finally acknowledged the existence of African-Americans as people, not supporting players who might need rescuing from the good white people.  I still remember cringing at Facing the Giants, which had only one black character who was this short of calling Alex Kendrick's character 'Massa'.  In all their other films, African-Americans were either supporting players or virtually non-existent, keeping with their rather curious worldview of a predominantly white world (I still also fume whenever I consider how the Hispanic character in Courageous was asked by Kendrick's character if he 'had permission' to work, something I'm sure he wouldn't have contemplated, let alone dared ask a black or white character).  The Kendricks have been tone-deaf at the very least to how they see minorities.  With War Room, we see something sorely lacking in films/television in general: a successful black family who are also relatable to non-African-Americans.  It's as if the Kendrick Brothers finally entered Obama's America.

I find it a wonderful turn that Alex and Stephen decided to switch from their original plans to have a white family at the center and create a world where African-Americans are equal, where they have homes, businesses, make mistakes, and find redemption.

I think that in short, they finally recognize that the world is more complex and diverse than their usual cinematic universe of upper-class Anglos who have a token 'black' friend and who carry that burden of being wise and empowering to all poor minorities that cross their paths.  In their recognition of sin, of human frailties, and of racial diversity, War Room is a landmark in the Kendrick Brothers film work.

And for the record, Danielle does have a token white friend, so in that sense that too is an improvement.

There are a few things still a bit off.  An unnecessary hold-up is made more bizarre by Miss Clara's declarations to the would-be robber that she overpowers him in Jesus' name.  I still don't know whether the robber left them unharmed because Miss Clara had genuine faith or because he thought she was a nutter.  The screenplay also doesn't make clear if Veronica was aware that Tony was married or not.   In terms of actual acting, I don't think Shirer or Stallings will be submitting their names For Your Consideration (though as a side note, the scene between Shirer and Pitts where Danielle asks her mother if she knows anything about her life now was moving), and Abercrombie was veering close to comical at times, though given she was playing much older than she actually is, I should commend her performance on the whole.

As a director, Alex Kendrick still has some difficultly drawing full emotions from his cast and making them be completely real people instead of 'actors playing roles'.  However, he was wise in giving himself a very small part rather than being the focus.  Maybe he finally realized that he either just can't act or doesn't have the training to be the lead (his gray hair and balding head are also tacit acknowledgements that Kendrick is getting older, and perhaps better as a filmmaker).  Paul Mills' score was appropriate when it needed to be (swelling when Elizabeth commits to Christ, light when there was need for humor).

As a side note, one of the actors who played a cop in Courageous, Ben Davies, plays a cop in War Room.   It would have been a clever in-joke if he were playing the same character, tying the Kendrick Cinematic Universe together.  Alas, it might be too much to hope for, but one can hope.  Still, I digress.

War Room has many positives that outweigh its negatives.  It is diverse, it has an interesting story with believable characters, it has logic mixed with faith, and it looks and feels like a genuine movie instead of the filmed sermons I'm used to from the Kendricks (in Courageous, the film ended with a sermon...still shake my head at that).  I was thoroughly impressed with War Room, and hope that the lessons in filmmaking that Alex and Stephen Kendrick learned from it are good ones.

Chief among them: this is how you make not just a Christian film, but a good film.