The Crowd: A Review 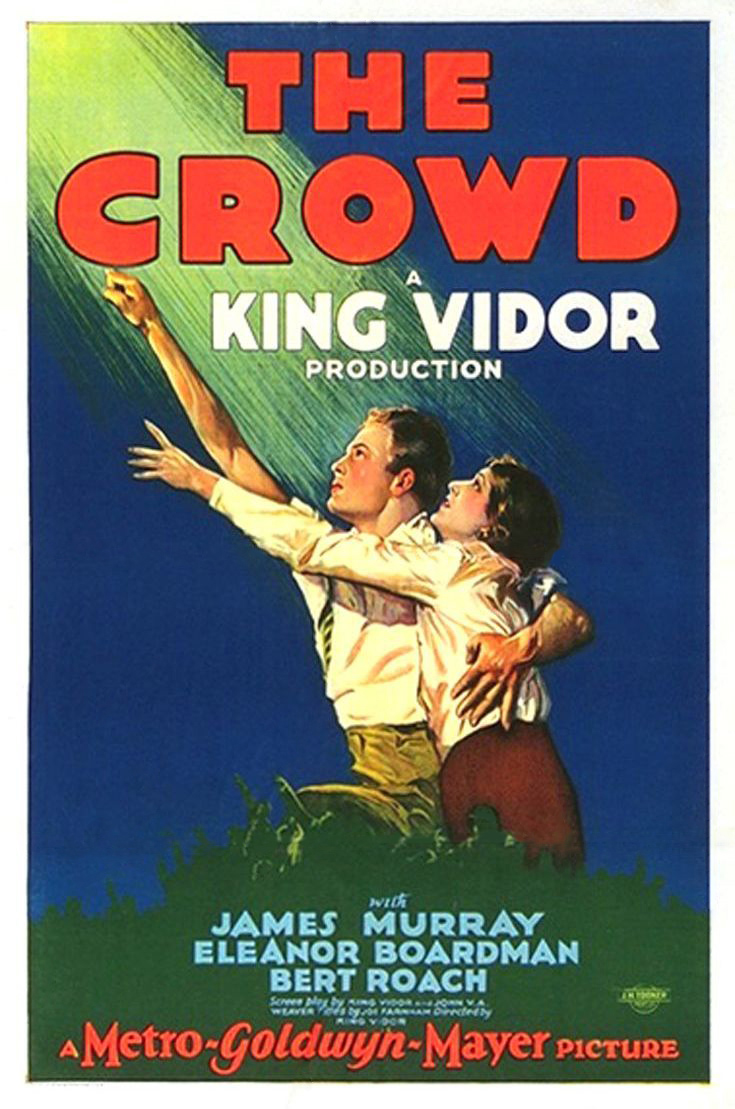 The Crowd was considered too downbeat for MGM, which is why the studio did not push for it to win the Academy Award for "Unique and Artistic Production", a now-defunct category that could be said was an artsier version of Best Picture (Sunrise having won, rightly so I think).  MGM wanted lighter fare, things that cheered people up, and in a sense, the studio was right: The Crowd failed at the box office. Despite this, The Crowd now rightly has been placed among the pantheon of great American films, certainly great silent films.

John Sims seems destined for extraordinary things, straight from his birth on July 4, 1900.  His father instills in him a sense of destiny, but Mr. Sims dies when John is 12.  At 21, John (James Murray) sets out for New York City, determined to accomplish great things.  He starts working at an office, one of many (his number is 137), and one night, rather than go to study as he planned, he's talked into going on a double-date with his coworker Bert (Bert Roach).  John's date is Mary (Eleanor Boardman), and he is instantly smitten.  So smitten is he that he proposes marriage on their first date, and Eleanor agrees.  After the wedding, Bert gives them two years, tops.

When they've returned from their honeymoon in Niagara Falls, John continues to dream big, but Mary's mother and two brothers don't think much of him or his lofty goals.  John can be arrogant and thoughtless, but also loving and kind, especially when Mary gives birth to two children: a boy and a girl.  John continues to search out for his ship to finally come in, and while Mary loves him, she at times grows agitated that he dreams while she sees Bert actually moving up in the insurance company.  However, things do turn for the Sims' when John wins a tagline contest: $500.  He buys gifts for everyone and calls for the kids to come back home.  However, his daughter is hit by a truck driver when she rushes off, and she dies.

So devastated is John that he can no longer concentrate, and he quits his job the day before the company picnic, not telling Mary until they are on the company ferry.  She stands by him as he goes from job to job, but finds things harder to bear.  Eventually, she has had enough of his dreaming and in frustration slaps him.  John goes walking with Junior, and comes close to committing suicide, but can't go through with it.  Junior comes up to him and tells him he wants to be just like him.  This unquestioning love from his son pulls John together enough for him to take any job he can get, going so far as to get a job as a juggling clown to attract attention for a company.

John goes home with Junior, thrilled by this bit of good news, when he comes across Mary and her brothers.  She tells him she's leaving him, and while he understands, he asks if he can take Junior to a show that he'd bought tickets for: three tickets in fact.  Mary cannot leave the man she loves, and The Crowd ends with the three of them, enjoying the show, a tiny group among a mass.

When I finished The Crowd, I did not get the sense that there was any 'downbeat' ending.  Yes, there were extremely downbeat moments (the death of the little girl, John's near-suicide), but I thought the film ended if not on an upbeat note (an alternate ending where the Sims had suddenly won the lottery was laughed off the screen by preview audiences), at least a hopeful one.  In this complex final scene, John, Mary, and Junior are enjoying the show when Mary gets sight of the playbill.  In its pages is "Slight of Hand: The Magic Cleaner", the tagline John had created and won $500 for.  She points this out to him, and he in turn points it out to the man next to him, who is also enjoying the show.  As the camera pulls away, we see that they are laughing with everyone else, finding some joy within the despair they live in.

For me, this doesn't indicate a somber, sad ending.  On the contrary: it says to me that there is still hope for the Sims, for them to rally back, for them to eventually find joy in their lives, even if John and Mary will never end up as President and First Lady.  If anything, I finished The Crowd not with a sense of despair, but with a sense of hope.

King Vidor, the legendary director, showed why he is a legendary director with this film.  In terms of technique, The Crowd is an extraordinary achievement.  There's the extraordinary sequence where we go from the massive New York City streets (The Crowd was shot primarily on location) to a particular building, then panning up to a particular window, then to go into a mass set filled with hundreds of men at desks, moving until we get to Number 137.  Even now, such a shot would be remarkable, but given that this was all done either in-camera or with models, the transitions are beyond extraordinary.

Vidor uses symbolism to great effect, particularly whenever he draws emphasis on how John is really one of "the crowd", a single figure lost among thousands, no greater than anyone else.  The special effects of when John and Mary's daughter is run down may be weak by today's standards, but we can see how Vidor was working hard to create real innovation.

We also see how powerful he was when it came to getting performances out of his actors (especially his then-wife Boardman).  She was sympathetic as the loyal wife who loves the man even when he drives her to despair.   It's a very gentle and tender performance, and a real one too when she finds a beach picnic brings out her frustrations at raising three kids (her son, her daughter, and her husband, who is happily playing his ukulele while she struggles to keep the food warm).

James Murray, an unknown when cast, makes John a curious mix of dreamer and fool, someone who is at times likable but arrogant, thoughtless but loving, despondent but hopeful.  It is a well-rounded and powerful performance, and I think one of the best of the silent era (even if at the scene when his daughter dies, it does become a bit theatrical in the silent film clichéd version).  However, when he is weakly asking firefighters rushing to a fire to keep quiet for his little girl, or when he sees his son still looks up to him, Murray breaks your heart.

Tragically, James Murray in real life became John Sims, only without the hopeful ending.  The Crowd was his only major role (though he did get some work in other films), and a few years after his triumph he became an alcoholic, eventually turning to panhandling on the very streets where he had filmed his great triumph.  In 1936, at age 35, he was found floating in the Hudson River, and no one knows whether it was accidental or suicide.  It is a tragic end to someone with great potential, and serves to underscore the reality of The Crowd's theme of the ordinary man being brought low due to his inability to fulfill his own lofty dreams.  The fact that James Murray too thought he was destined for great things and that he was only a year younger than his character who faced a similar fate makes all this all the more tragic.

I would say about the only real flaw I found in The Crowd was when we had a long scene on the train on their wedding night, which I though was a bit too long and comical and taking up too much time.  However, that is really a minor point that doesn't take away the brilliance of the film.

The Crowd, I think doesn't make the case that the ordinary man is a failure if he remains ordinary.  I think it says that sometimes one isn't destined for 'greatness' as the world sees it.  There is greatness in humility, in being a caring husband and father, in being a good friend, in being yourself.  It is good to have ambition, but it is better to have a good life.