I AM A FUGITIVE FROM A CHAIN GANG

We don't have chain gangs anymore, and I'll leave it up to you whether that's a good thing or a bad thing.  I think on how Cool Hand Luke was also about a chain gang, but not as dour or brutal as I Am A Fugitive from a Chain Gang.  The title might sound sensationalistic, but the film is not.  An intense story of a victim of circumstance, I Am A Fugitive from a Chain Gang is one of the best examples of how to make a 'message' picture without being preachy, a picture of dignity, a true canvas of the suffering of humanity...with a little sex in it.

James Allen (Paul Muni) comes home from the war dreaming of being an engineer.  Instead, he finds his hero's welcome consists of going back to the routine of a desk job that he doesn't like.  Despite the misgivings of his mother (Louise Carter) and preacher brother (Hale Hamilton), James strikes out on his own.  However, workers are cheap and work hard to come by, even one for someone as enthusiastic as James.  He falls on hard times and turns into a hobo.

One night, he meets up with a fellow tramp who offers to buy him a hamburger.  To James' shock, the other man holds up the joint, forcing James to be his accomplice at gunpoint. Unfortunately, the police wander into the hamburger joint right at that time, killing the other bum and catching James when he tried to flee.  James was sentenced to a certain number of years in this Southern chain gang (the film never specifies which state he was in). 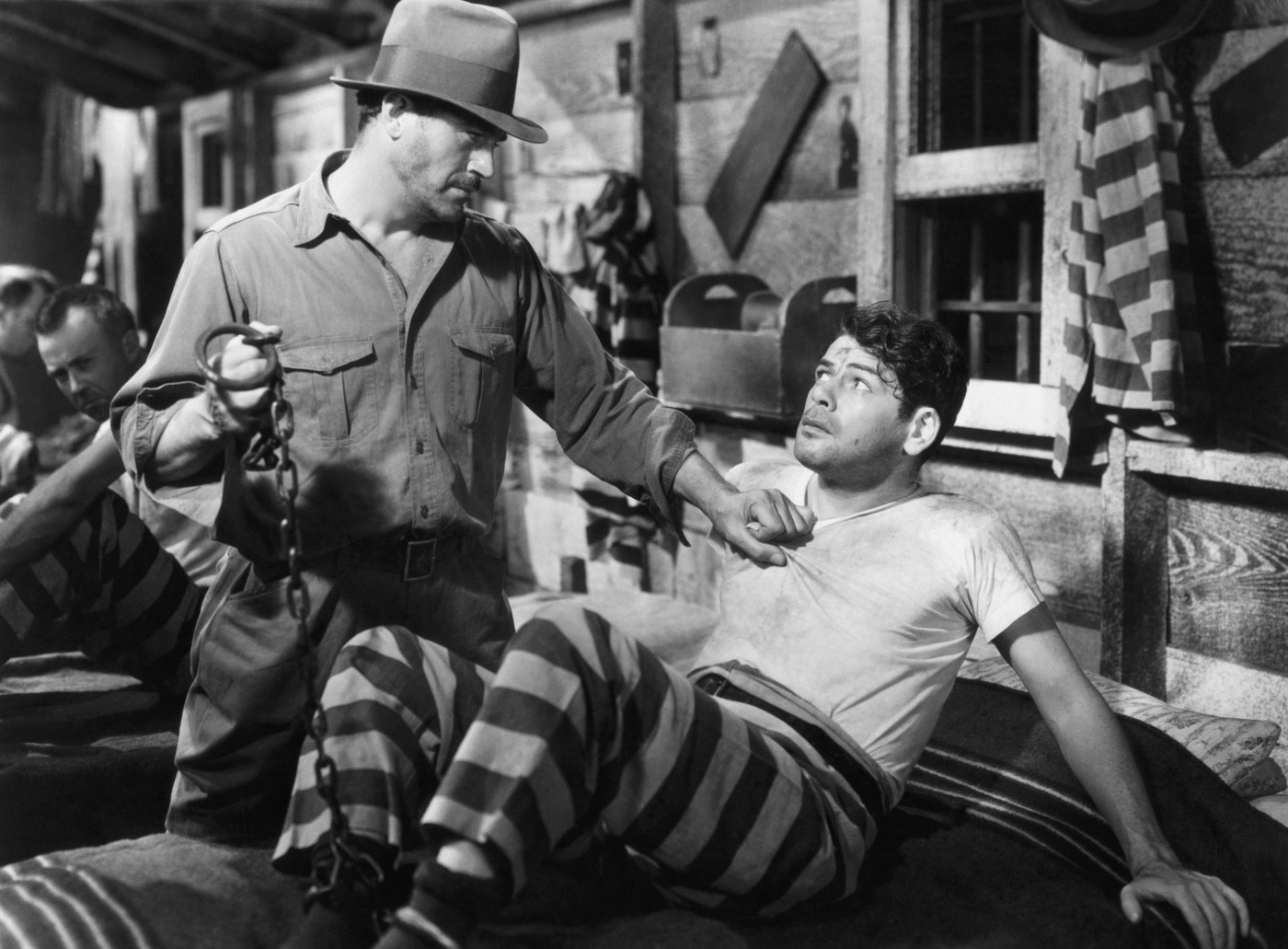 This place is a living hell, where men are whipped for minor infractions, the days begin at 4:20 a.m., the prisoners demeaned, degraded, and humiliated.  The food is barely fit for human consumption, and the only way to leave is either work out or die out.  James eventually hatches an escape plan, and manages to pull it off in dramatic form.

However, he can't stay on the lam forever, and he goes to an old ex-inmate friend for help.  James eventually goes to Chicago, where with a new name, Allen James, he rises in construction from a mere laborer at $4/day (or what I make at my job...just a joke) to an Assistant Supervisor at $14/day.  He finds not just respectability, but a purpose, and begins a relationship with his landlady, Marie (Glenda Farrell).  Marie has found out about his past and threatens to expose him unless he marries her, so he reluctantly goes along with it.

His job is his only happiness, until he meets Helen (Helen Vinson), a girl who claims "I'm free, white, and 21".  They fall in love, and while Helen knows he's married, she doesn't know about his chain gang work.  James begs Marie for a divorce, but she won't hear of it, seeing him as her meal ticket.  He won't stand for it and tries to call her bluff, but she wasn't bluffing: she called the police on him.

The case becomes a public scandal, with Illinois refusing to turn James Allen over to the Southern authorities (despite being in jail).  James has contributed to the betterment of Chicago, engineering some great bridge projects, and they see him as a productive member of society.  The Southern officials tell them that if he volunteers to return and serve a token 90-day sentence, on the chain gang (a clerk position they say), the governor will grant a full pardon.  James wants to clear the whole business and start a life with Helen, so he agrees.

At the end of the 90 days, he is denied parole or a pardon, told it would be for a year.  When the year's up, he's told his parole/pardon request have been suspended...indefinitely.  It looks like the state is determined that he serve out his full ten year sentence as punishment for speaking out publicly against their chain gang system.  Enraged at this betrayal, he makes another daring escape and eludes authorities again.

One night, about a year after his second great escape, Helen is shocked to find him there.  "It was all going to be so different," she cries.  "It IS different.  They MADE it different," he replies in anger. As he is forced to return to the darkness, Helen asks if he'll write or if he needs any money.  "But you must need money.  How do you live?" she cries out in agony.

"I STEAL!" he responds in the darkness, and then hurried footsteps are heard. 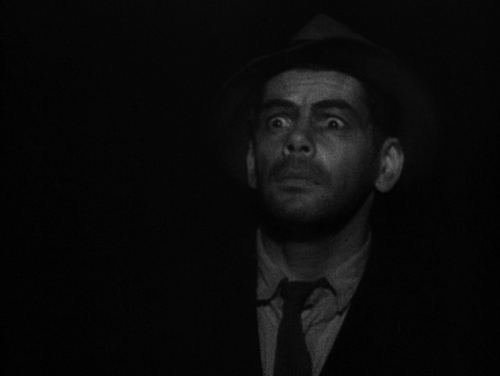 I Am A Fugitive from a Chain Gang is a devastating picture, and I think it is one of the best examples of using sound in early talking pictures (in 1932, sound was a mere five years old).  Director Mervin Le Roy for example, has absolute silence when James is underneath water in a swamp, breathing through a reed, then jumps to sound when we see above water, the hounds and guards searching him out there.

Le Roy also created great visuals to go along with sound, such as when we see the sledgehammers being used to hammer away the months on a calendar while their banging continues.

That gripping final scene is one of the great endings in film: James, now totally ruined and turned into the criminal he became rather than the honorable man that he'd been due to the pettiness of other men, slipping into physical and metaphorical darkness.  His chilling final line, "I STEAL!" says it all.  He now has been reduced to a criminal, forced into it by the same system that was built allegedly to rehabilitate the criminal (only of course he was never a criminal to begin with, just someone at the wrong place at the wrong time with the wrong person).

What is fascinating about I Am A Fugitive from a Chain Gang now is how daring it was, and not just with regards to its portrayal of the chain gang system and advocacy against it.  In those aspects, we don't get gruesome imageries, but just enough to repel us (such as the whipping James gets when he says an off comment about how the guards are treating someone else getting whipped).

What I am talking about is in regards to sex.  Again, nothing is overt, but how the film dealt with sex shows how filmmakers of the 'Golden Age' were able to squeak things past censors while trusting the audience to figure things out for ourselves.  When we get to the hideout, we meet Linda (Noel Francis), James' ex-inmate pal's moll.  She offers James a drink, which he declines.  However, he can't help looking at her in her slinky outfit, and she coolly comes over and sits next to him, telling him that he knows what he's thinking, and that it's OK.  He's among friends...before we fade to black.

We think they had sex, but whether the censors realized the suggestion was strongly implied I cannot say.  Same goes for Marie, for we figure with her brazenly flirtatious nature she was passing him a bit of nookie with the monthly rent.

I think in terms of performances, Paul Muni did some of his best work here.  It's curious (and I think, slightly sad) that his Tony from the original Scarface isn't as well-remembered by the younger set as is Al Pacino's version.  In Scarface, Muni was an unapologetic criminal.  Here, he was a good man who had some bad turns, and while we cheer for his escape and enjoy his evolution to a productive member of society, we also see how eventually James was worn down by forces outside his control.

There is an evolution from war hero to hardened criminal, and a dangerous one at that (what is to prevent him from killing), and Muni was powerful and heartbreaking and intense.  Muni did an extraordinary job as James Allen, even putting in a bit of humor to things.

While on the lam, he gets a shave.  To his surprise, a policeman comes in but fails to recognize him.  "How was it?  Close enough?" the barber asks.  Muni, trying to avoid tell-tale signs to be seen by the cop, answers, "Plenty", the double meaning of 'a close shave' obvious.

Vinson as Helen is also well-acted, if brief.  I would say that at times Farrell as Marie was a bit wild and overdoing things, but given the character's nature, it is something one can accept as realistic (at least when it comes to her).

I Am A Fugitive From A Chain Gang is a brilliant film, well-directed and acted , moving briskly while keeping the energy going.   Good thing we don't have chain gangs, and I think it was due in no small part for this expose of the brutality of the system.  It's a message picture perhaps, but the message is so well-delivered we can see the film as either a straight narrative or an advocacy picture.  Modern filmmakers take note: THIS is how a message gets delivered.