The Librarians: And the Broken Staff Review

THE LIBRARIANS:
AND THE BROKEN STAFF

'Staff' has two meanings.  The first is a piece of wood that one uses for walking or as a scepter of sorts.  The second is the group of people working at a particular location.  I think both meanings apply to And the Broken Staff, the second part of the two-part season premiere of the second season of The Librarians. We have the main story involving the first meaning, and then we get how the second meaning applies, but as with all things Librarian-related, the second has a pretty strong and happy ending.

After Prospero (Richard Cox) and his associate Moriarty (David S. Lee) escape, main Librarian Flynn Carsen (Noah Wyle) is none too pleased about the turn of events.  He also isn't particularly thrilled about having to hold a staff meeting with the other Librarians, but under pressure from the Guardian/girlfriend Eve Baird (Rebecca Romijn) does so.  Flynn deduces that Prospero is after his magic staff which will give him great power.  In The Tempest, Prospero breaks his staff as a way to reject his magic, but now he's no longer playing by the book...so to speak.  However, no one knows what happened to the pieces.  They don't seem to be part of the Library's collection, but Annex Librarian Jenkins (John Larroquette) lets it be known that ever since the Library was restored, some of the collection is unaccounted for...and the rooms seem to be in flux. 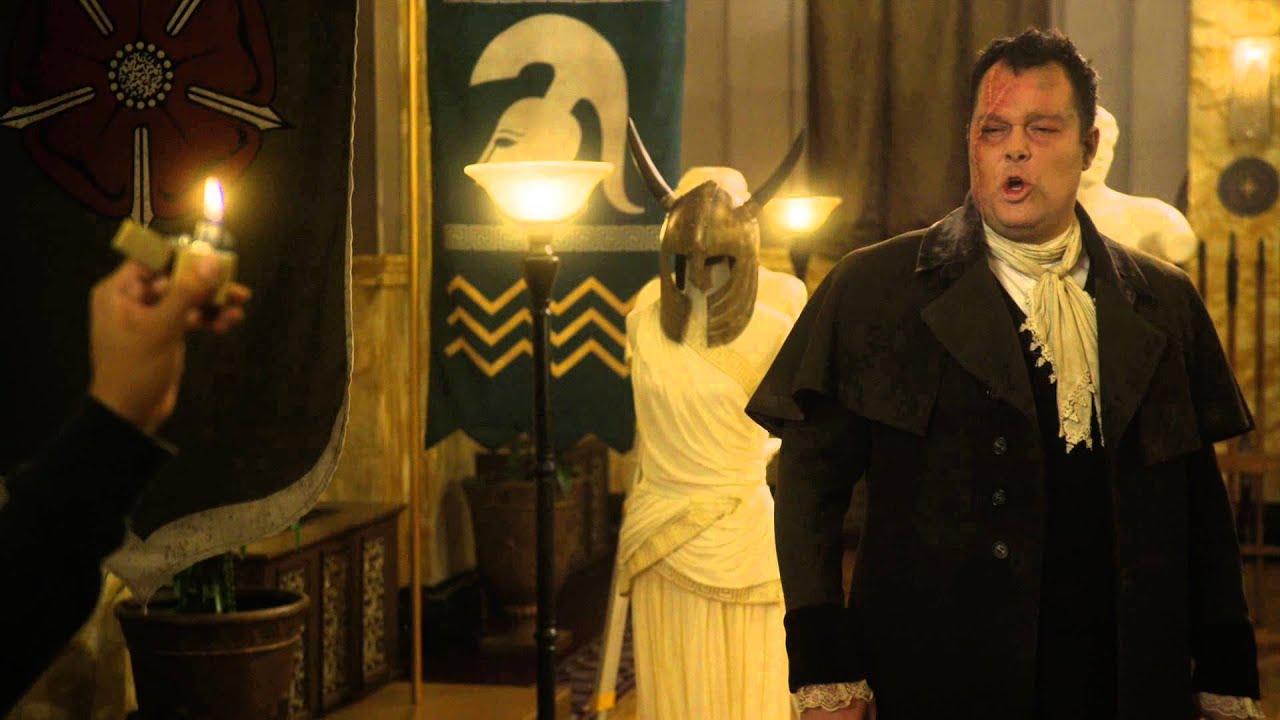 Well, Eve and Flynn go searching for clues regarding the staff while the other Librarians do their own research.  Only a slight hitch: Prospero and Moriarty have managed to break into the Library itself.  Soon, their nefarious scheme is revealed: Prospero no longer wants his old staff, he wants to make a new one out of the Tree of Knowledge, hidden within the Library's core.  Jenkins isn't about to stop them, what with Prospero freezing him in a case of ice and all.  Librarians Stone (Christian Kane) and Cassandra (Lindy Booth) want to overcome the security Jenkins had triggered, but master thief Jones (John Kim) tells them they simply can't break it.

Eventually they do, but to locate the heart of the Library requires teamwork and triangulation.  Flynn and Jones in the Antiquities Room, Stone and Baird in the Reading Room, and Jenkins and Cassandra in the Annex itself.  Prospero has a few tricks up his sleeve though: he leaves The Queen of Hearts from Alice in Wonderland to fight Stone and Baird, and in the Antiquities Room, Flynn and Jones face off against Frankenstein's monster.  They are able to defeat them and the race is on to stop Prospero and Moriarty from finding the Tree of Knowledge.

Prospero is tricked about the destruction of the Tree of Knowledge and Flynn leaves to find more missing artifacts on his own, while the other Librarians begin to plan their next steps.

And the Broken Staff has some of the patented Librarians wit.  Eve at one point complains about the apparently inept security at the Library.  "This is the third time this place has been broken into since I started here," she hollers.  When Jones tries to fight Frankenstein's monster with a lighter, he is astonished that the creature does not flee in terror, but stands there with almost disdain.  "Frankenstein's monster is afraid of fire," Jones says.  "In the movie," Flynn corrects him, "not the book".  Jones looks back in surprise.  "You mean there's a difference?!"

Eve threatens to throw Prospero's fob watch which holds Ariel over a cliff, reminding Moriarty that falling off cliffs wasn't exactly his strong suit.  Moriarty reminds her that Holmes was never the same after the events of The Final Problem, so much so that some scholars suggest it wasn't Holmes who returned from the Reichenbach Falls, but Moriarty claiming to be Holmes.  I confess to never having encountered this theory, but it is a nice touch and fascinating bit of speculative fiction.

What I found perhaps slightly disappointing was that Vanessa Vander Pluym's Queen of Hearts proved a bit of an anticlimactic villainess, really doing nothing but shouting "Off with their heads!".  It wasn't a complete waste given that it gave Romijn and Kane a chance for action/comedy, but I think she could have been written better.

I also thought the giving up of the fob watch was a bit too easy.  Rather than have a real battle (or battle of wits), Moriarty just basically says 'let me have the watch or Prospero will do something terrible to me' and she agrees.  Still, the fact that Lee is proving to be such a charming antagonist (both cultured and dangerous) makes his Moriarty a delight (and I might add, a damn sight better than Andrew Scott's hysterical and camp take on Moriarty on Sherlock, whose popularity thoroughly escapes me).

There is an awful lot of comedy here, which is a real treat.  Seeing Kane, Booth, and Kim all working together so well when they rush off to an actual public library to retrieve the one book all libraries have (The Complete Works of William Shakespeare) shows they've got their individual characters down pat.  Seeing them have to pay to get the only copy of the book the library has from a little girl was a highlight of the episode (as was when Frankenstein's monster finds he can find love online).
"This is how Librarians solve problems: with our minds and our hearts," Flynn tells Jones and Frankenstein's monster as he hugs it out with the big beast.  And the Broken Staff continues The Librarians mix of wit and whimsy, unapologetically family-friendly entertainment that is fun and clever.  All the actors (regular cast and guest stars) know to take this seriously but are also aware this isn't suppose to be serious.  The Librarians is a fantasy show, and by embracing its premise, it ends up being a fantastic show. 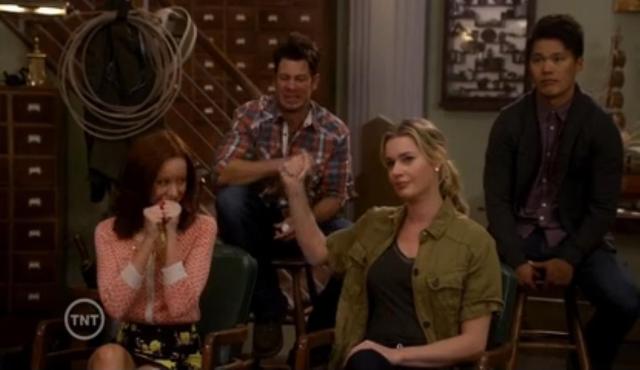 Next Episode: And What Lies Beneath the Stones
Posted by Rick at 9:09 PM