No trailer for a television show has been as disheartening as Supergirl, the newest comic-book adaptation to hit television like a stampede (fighting for a place among all types of versions, from the dark and gritty Batman prequel Gotham and not-so-dark Arrow to the noir-like Agent Carter, the Netflix version of Daredevil, the Marvel spinoff Agents of S.H.I.E.L.D. and the more upbeat The Flash).  A new series built around Superman's cousin played as a romantic comedy.

Now, it's the Tiffany Network that's getting in on the act, as they're taking on the story of Superman's cousin Kara, last seen in a disastrous film version.  The Pilot is not without its flaws, but on the whole I think it's a pretty good start to a new franchise.

Sent from Krypton to protect her infant cousin Kal-El, Kara Zor-El is taken off-course by Krypton's explosion and forced into the Phantom Zone.  Lost for 24 years there, she manages to finally arrive on Earth only to discover Superman has managed quite nicely on his own.  Her cousin takes her to be protected by the Danvers family, scientists who have helped him along the way.

Kara Danvers has now decided the best thing to do is blend in, since in her voice-over, "After all, Earth didn't need another superhero".  Kara (Melissa Benoist) is now an assistant to Cat Grant (Calista Flockhart), a media titan who is also vain, egoistic, and selfish.  Kara has one friend at CatCo, Winn Schott (Jeremy Jordan), who hasn't got a chance with Kara despite his best efforts.  More capable is the new art director at CatCo, "James" Olsen (Mehcad Brooks), who is now hunky, confident, and black, and is called "Jimmy" only by his mother and "the big guy in blue". 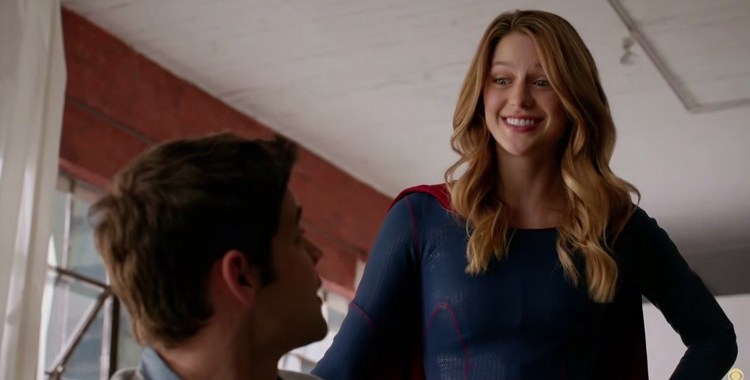 Well, Kara seems destined to live her life in anonymity until her sister Alex (Chyler Leigh) is on a plane about to crash.  Kara stumbles into flight as she makes a dramatic rescue.  Alex is displeased that Kara has emerged, and Kara is displeased Cat has dubbed her 'Supergirl'.  Now Kara must find her way in the world to become the heroine she could be.

That won't be easy, given her own sister works for the secret Department of Extra-Normal Operations or DEO.  And of those they are going to keep tabs on is...Supergirl.  DEO head Hank Henshaw (David Harewood) doesn't trust Kryptonians, especially since when Kara's ship left the Phantom Zone she pulled a prison ship with her to Earth, and those prisoners are now beginning to come out of hiding.  However, Alex convinces both they need to work together, and she must take on Vartox (Owain Yeoman), one of the prisoners who wants revenge on Kara since her mother put them in that prison.  Kara is able to defeat Vartox, and James gives her a gift: a cape from her cousin, who is proud of her.  With only James, Winn, and Alex aware of her true identity, Supergirl takes flight.

Like a lot of pilots, I think Supergirl threw in way too much into it, as if wanting to assure that if it didn't fly, it would cover a lot of ground.  This is a shame because we got essentially a cameo from the original Supergirl, Helen Slater (who was much better than the material she was given back in the film) and Dean Cain (one of the many television Supermen) as the Danvers.  Unless they make a return appearance, it does feel like a wasted opportunity.  Nice touch, but wasted opportunity.

Also, there were other elements that didn't quite work.  The whole storyline with Cat Grant is obviously a variation of The Devil Wears Prada (I guess in Cat's case, The Devil Wears Gucci) that seemed to come from another draft of the script that might have made the whole thing more comic than serious.  Her first mission, her being taken down by Kryptonite by DOA, the introduction of DOA, the revelation that Alex is part of DOA: it all seemed to me that what could have made for two to even four episodes was compressed into one.

As a result, the Pilot was a little top-heavy, much to the overall show's detriment.

One thing that is curious is with regards to the new Olsen.  I'm of two minds about the new version.  While I'm a traditionalist with regards to my favorite Superman character, I'm thrilled that we go beyond traditional casting to give African-Americans a greater opportunity to be part of the Superman mythos.  My issue is less with making Jimmy Olsen black (though I'm going to miss the red hair) than with making "James" a more confident, chest-thrusting character.  I still hold to my idea that Jimmy (and yes, I'm on the "Jimmy" side...curse Smallville) as the naïve, innocent, kind of clumsy cub reporter/photographer.  I can see why the change was made, but I think it will come as a shock to see James standing so tall and confident.

Whatever love triangle is being suggested by James, Kara, and Winn isn't going working only because Winn is coming across as less than a threat, and I'll leave it at that.

However, the best aspect of Supergirl is Benoist, who is able to balance being sweet and loveable and tough and heroic.  She is wonderful in the goofy, rom-com moments and wonderful in the girl-power moments, from the fear of failure to her joy at flying, Benoist doesn't hit a wrong note.

She pushes everyone else up with her with the possible exception of Leigh, who plays the serious Alex Danvers in her subtle sibling rivalry well.  Jordan I figure is the comic relief who comes across more as the obligatory gay friend than a serious potential love interest, and Flockhart's character seems to be playing a character from another show altogether.  It does add to the jumble but hopefully it will be better integrated into the show as time goes on.

It is curious that the name "Superman" was mentioned exactly once.  Every other time, he's referred to as "cousin", "Man of Steel", "man in blue", or some other variation.  I could wonder why, or whether Superman himself will ever appear, but I think it is the show's way of trying to build its own world apart from the overall Superman story.

As it stands, The Pilot has far too much in one episode where it would have been better to spread things out a bit.  However, with Benoist as the lead, I think National City is in pretty safe hands.

Next Episode: Stronger Together