You have in The Apartment a comedy, a drama, and a romance about men with mistresses and a bit of a schnook who lets his bosses use his apartment as a virtual house of ill repute.  Seeing it again after many years, I was slightly underwhelmed by The Apartment.  It's still a good film, but I didn't find it as sharp as I did the first time, its symbolism a bit too obvious.  Still, with some wonderful performances it still is worth seeing, if perhaps only once.

C.C. Baxter (Jack Lemmon) better known as "Bud", is a midlevel insurance agent at a conglomerate,  not a particularly ambitious man but not one to shrink from advancement.  He has managed to stumble and bumble his way up the corporate ladder (or elevator as the case may be) thanks to being ever-so-helpful to his bosses...by lending them his apartment for assignations with their various mistresses.  Baxter, whom upper management regard as a schnook and sometimes call "Buddy Boy", is literally put out of his apartment on various occasions to please others.  His neighbors the Dreyfusses are under the impression that Baxter is some sort of sex maniac, a male slut who sleeps around with different women.

However, Baxter's interested only in the lovely Fran Kubelik (Shirley MacLaine), the elevator girl all the managers want but can't get.  Baxter's career seems to finally be in the upswing, as Personnel Director Mr. Sheldrake (Fred MacMurray) tells Baxter that he knows all about 'the apartment'...and that Baxter is being promoted.  Of course, Sheldrake needs the apartment for his own needs and own needs alone.  This means Baxter has to be put out again, but he does get tickets for The Music Man as compensation for his troubles.  Baxter asks Miss Kubelik out, and she agrees, but she has to keep a date with an ex first.

That ex is Sheldrake, who tells her that old 'I'm leaving my wife' story, which she believes.  Thus, poor Baxter is left waiting in the lobby.

Kublick gets her own surprise at the raucous Christmas party, where Sheldrake's secretary/former mistress Miss Olsen (Edie Adams) tells Kublick he'll never leave his wife.  Baxter, by now discovering Kublick is Sheldrake's mistress, is heartbroken and manages to find a woman for himself at a bar, but then gets the surprise of his life when he goes to his place and finds Kublick barely conscious, having attempted suicide with some of his sleeping pills.  He begs help from Dr. Dreyfuss (Jack Kruschen), who manages to revive Kublick but reprimands Baxter for 'his' womanizing ways.

As Kublick recovers, Baxter is desperate to set things right.  This means begging Sheldrake to come get her and telling him that $100 he left for her did not help matters.  It also means getting Miss Kublick to love herself a little and not be taken in by her bad run of bad men.

Eventually, as we shift from Christmas to New Year's, Baxter has decided he will tell Miss Kublick he's in love with her and 'take her off Mr. Sheldrake's hands'.  Unfortunately, Sheldrake tells him that his wife has thrown him out and that he's going to have a good time with Fran...and he needs the key for his apartment.  At long last, Baxter says no, and quits.  At the New Year's Eve party Sheldrake and Kublick are at, she learns what Baxter did and deserts Sheldrake, rushing to Baxter's apartment.

She freezes in horror when she hears what appears to be a gunshot coming from his apartment, and pounds on the door in terror.  After a few tense moments, Bud appears...with a just-opened champagne bottle.  They resume the gin rummy game, and when Bud tells her he absolutely adores her, she looks at him with tenderness and says, "Shut up and deal".

I remember the first time I watched The Apartment finding the whole thing salacious, hilarious, and romantic simultaneously.  The second time I saw it I found it pretty much the same, but now with some flaws and questions that I didn't think of before.

I think my concern comes from the Baxter character.  As played by Lemmon, I never got the sense that this man was particularly ambitious and using the apartment for advancement.  Baxter came across as almost an innocent, someone a little bumbling who stumbled into this sordid business.  Every time an unwarranted promotion came his way, while he clearly should have known it came as a result of his sleazy endeavor, he seemed to behave and act as if it came almost out of the blue.

That somehow just didn't sit well with me.  I don't know if it was to try to make the character more sympathetic, but it made him come across as almost dim-witted.  I just never got the sense he let his bosses use the apartment for his own gains.  He just seemed to let them have it because he really was a schnook.

The Apartment also seems to slow down a bit during Kublick's suicide attempt and recovery in Baxter's apartment.  I felt that I was watching less a movie and more a play.  This section seemed very staged and that very staged manner took me out of the film altogether.

However, there is so much right with The Apartment that it's hard to argue with whatever might be wrong (and that includes Kruschen's Oscar-nominated performance, which while nice was nothing that would make it stand out).  We get three great performances from our main cast (two of them Oscar-nominated, one shamefully not).

For my money, the best two performances were MacLaine and MacMurray as Fran and Sheldrake.  MacLaine's Miss Kublick was a mixture of sense and sensibility, a smart cookie who was dumb when it came to men.  While the character was incredibly shrewd about people (she could tell Baxter was a gentleman because he was the only man to take his hat off in the elevator), MacLaine also made one believe Fran could genuinely be in love with someone as reprehensible and amoral as Sheldrake.

This goes to the second great performance: Fred MacMurray, The Paterfamilias of America, was brilliant as the sleazy Sheldrake, the casualness of his ability to screw women in every way imaginable makes him more chilling.  It's interesting that MacMurray never got credit for his incredible range as an actor.  Despite giving perhaps some of his performances as a villain (in The Apartment and Double Indemnity) he seemed typecast as the nice guy (those Disney movies and My Three Sons I'm sure adding to that perception).

Lemmon plays his usual slightly bumbling persona, and while I wasn't overwhelmed by it I was slightly charmed by his take on the character: less sleazy and more naïve.

Wilder, a master storyteller, added wonderful character touches with The Apartment.  He trusted the audience to keep up with him.  For example, we see the romance between Baxter and Kublick by their interplay in the elevator, which is a witty conversation of lightness.  When Baxter rattles off statistics about people getting colds, Kublick answers that she feels guilty, telling him that since she never gets colds, someone else would have to get twice the number to make the average work out.

We see Baxter's evolution when we see him go up the elevator later on, and Kublick observes he didn't take his bowler off (the bowler, the sign of the male bourgeoisie).

The final moments as Kublick runs to Baxter fills us with optimism, then Wilder pulls the rug from under us with that terrifying noise (earlier in the film, Baxter had mentioned he had attempted suicide over a lost love of his own, only to end up accidentally shooting himself in the leg).  The audience is held in terror, until Wilder again pulls the rug from under us to give us as optimistic an ending as the great cynic Billy Wilder could.

The Apartment, while perhaps not as daring as it was when it premiered, is still a sharp, witty, and ultimately tender romantic comedy.  The romance between Bud and Fran is one of the great tales of lovers lost and found.  Even in the sleaziest of circumstances, love can bloom. 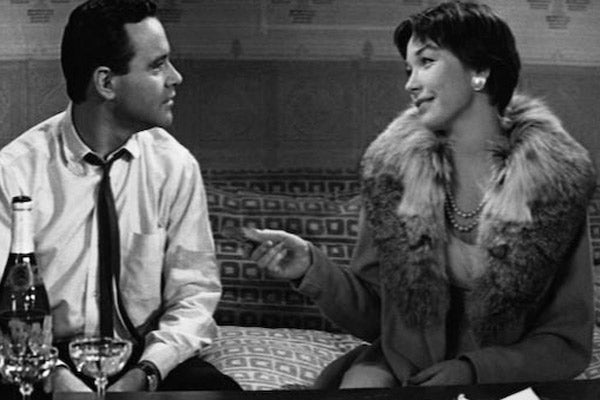