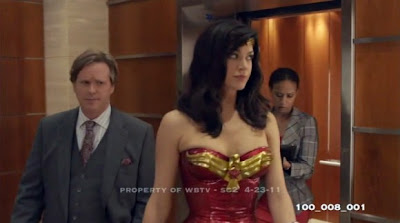 Editor's Note: As a precursor to reviewing Batman v. Superman: Dawn of Justice, I thought it would be nice to take a glance at the last time one of the characters from that film make it onto our small screen.  We've had Superman in teen angst (Smallville) and romantic comedy (Lois & Clark: The New Adventures of Superman).  We now have a very successful Batman prequel (Gotham).

However, what about Wonder Woman?  Well...

She Is Wonder Woman.  See Her Bomb...

I am old enough to remember the Wonder Woman television show with Lynda Carter as the Amazonian comic book character.  I never thought the show was campy or silly, though I always wondered where exactly her glasses went whenever she would spin around and the explosion would turn her into the Amazonian princess warrior.

However, since Wonder Woman went off the air the character herself has been absent from the screen save for animated versions such as the Super Friends or Justice League series. There was always talk about a Wonder Woman movie, but for whatever reason nothing came to fruition until 2016, when Wonder Woman appeared in film for the first time as part of Batman v. Superman: Dawn of Justice.  Regardless of the success or failure of Dawn of Justice, we will get a Wonder Woman film in 2017.

As I thought about both Wonder Woman and Dawn of Justice, it brought to mind the last attempt to mount a project around this DC character.  In 2011 it was announced that Wonder Woman would return to our television screens.  It all looked so promising.  David E. Kelley, the wunderkind behind L.A. Law, The Practice, Ally McBeal, and Boston Legal, (all Emmy-winning shows) was the Wonder Woman pilot scriptwriter and producer.

Those fears were realized when the pilot was screened for NBC executives.  What was once considered a sure-fire property was roundly rejected by the network brass.  So appalled were they that Wonder Woman was hoped to be buried, never to be seen again.

Ah, but these are the years of the Internet, where nothing gets buried for long.  The unaired Wonder Woman pilot soon found itself making the circles.  The question now is, 'Was it as awful as all that?'

There is something nefarious going on in the inner city/ghetto.  Young, relatively healthy men are suddenly becoming violently ill.  Diana Themyscira (Adrienne Palicki), head of Themyscira Industries, also publicly known as Wonder Woman, is launching herself into investigating what evil is this.  If it means using the Lasso of Truth to strangle suspects she chases down the streets, or complaining to a cop who orders her to step away from the suspect that he'll only 'lawyer up', little details.

Obviously, Diana Themyscira is no fan of the Bill of Rights.

She opts to go deeper into this case by publicly accusing supplements businesswoman Veronica Cale (Elizabeth Hurley) of using some sort of secret formula to create some sort of performance-enhancing drugs that give people almost super-strength...but will kill them.  She then adds that she cannot prove these charges (which she makes at a press conference) but will do eventually.

Meanwhile, her CFO Henry (last name either Johns or Demter) (Cary Elwes) can only fret as Diana continually seems uninterested in the marketing and merchandising of herself via the Wonder Woman figures.  If I understand things correctly, the various figures, dolls, and I figure lunchboxes all go into funding her vigilante work (work, I might add, which Diana is very public about, the world fully aware that Wonder Woman and Diana Themyscira are one and the same).

Diana finds being Wonder Woman a bit hard at times, so she opts for a secret identity: Diana Prince, who can sneak away to a small apartment where she can enjoy the company of a cat, go on Facebook, and watch sappy romances like The Notebook.

Anyhoo, Veronica Cale isn't thrilled by Wonder Woman's allegations and attempts to push her around, even bringing her friend, Senator Warren (Edward Herrmann) in to put the squeeze on our PATRIOT Act-busting superheroine.  Wonder Woman, however, will not be denied, pushing her cleavage around to force her silent police partner Ed Indelicato (Pedro Pascal) into letting her 'see the witness' who is under police protection (in large part BECAUSE of her).  She has the Lasso of Truth, but why use THAT when you can break someone's arm?

It all culminates in her raiding Veronica's secret lair where evil experiments are being conducted.  Wonder Woman, in her all-too-visible plane, goes in, kills (yes, I said KILLS) a lot of bad guys, and faces Veronica Cale down.

At the end of this victory, she gets notice that the lawyer from the Justice Department is here to see her.  We learn that this lawyer is the same guy she's been seeing in flashbacks: none other than Steve Trevor (Justin Bruening).

Wonder Woman is so disastrous in so many ways one marvels at how often Kelly and Company manage to botch things, sometimes finding new ways of doing so.

Let's start with the identity crisis.  This Wonder Woman apparently isn't satisfied with having a dual identity (let alone a secret one).  She is very open about being Wonder Woman AND Diana Themyscira.  EVERYONE knows she's one and the same, begging the question of why any potential super-villains haven't just tried to go after her.

I thought the whole point of a secret identity was to let you work...in secret.  Then again, I'm apparently not as smart as David E. Kelley.

Making things more muddled was Kelley's decision to go with something of the established Canon by making her have a third, really secret identity: Diana Prince.  I imagine this was his way to show how clever he was, how he was reinventing the wheel.

What it really showed was his efforts to be TOO clever and only ending up looking foolish.  It makes no sense to introduce three identities when two will do.

Furthermore, some of the dialogue is downright hilarious in the unintentionally so manner.  At the T.I. board meeting when Diana is discussing the case with her assistant Etta Candy (Tracie Thoms), the issue of the new Wonder Woman doll comes up.  A clearly frustrated Diana argues that despite his insistence she never approved the design.

"I never said merchandize my TITS!" she bellows.

It is a sign of the confused nature of Wonder Woman that on one hand, Kelley is attempting to make a proto-feminist case about how women, even superheroines, are objectified, and on the other essentially cements this objectification with Wonder Woman using her bosom to essentially push men around.

Add to that, what kind of superheroine can Wonder Woman be when she is reduced to being a sad cat-lady pining over her ex Steve Trevor (whom in the flashbacks we see HER dumping HIM and in the end seeing he opted to marry)?   Who knew the Amazonian warrior princess was such a fan of Nicholas Sparks films?

There are other moments in Wonder Woman that are just flat-out bizarre.  At the end of Wonder Woman's blatantly illegal raid (after making public accusations that she admitted she could not prove...can anyone say, 'libel'), she meets a waiting Veronica Cale.  Cale tells Wonder Woman in a triumphant tone that she has her on videotape raiding her establishment and killing (yes, I said KILLING) her workers.

"You're about to meet your equal, Wonder Woman: the American criminal justice system".

No actor, no matter how talented, could utter such a line and make it sound sensible.
They opted to have Elizabeth Hurley say it.

There are so many points where Wonder Woman is determined to go against Canon to show how inventive it is, only to make those who know even the most cursory thing about her scratch their heads.  She has the Lasso of Truth, but never uses it unless it's to physically torture people.  Instead, she actually tortures people to get information (one character refers to it as "Abu Ghrabing").  Maybe Kelley was attempting political commentary.  If he did, he chose the absolutely worse vehicle to do so.

She has no invisible plane (which again, makes one wonder why it has never been shot down).  She funds her crime-fighting by marketing, which I don't think would go over well with the Federal Trade Commission.  Despite her great investigative skills, she and no one at Themyscira Industries was aware that Steve Trevor worked at Justice.

In terms of acting it is a sight to behold.  Only Thoms saves herself from embarrassment, as she made her Etta Candy a responsible, intelligent figure (which is more than I can say for everyone else).  Elwes had nothing to do but be constantly flustered (as if perhaps he knew he was in a disaster and couldn't stop praying for cancellation).  I felt bad for the late Edward Herrmann being dragged into this with an almost pathetic effort at some faux Southern cone-pone accent as a sleazy Senator.

Let me say that I have nothing against Justin Bruening.  He's a good-looking man and I figure a nice man off-screen.  However, he was so blank and wooden as Trevor.  It takes a special kind of talent to be out-acted by Lyle Waggoner.

The two women were, well, there.  Hurley, as far as I can judge by the pilot, played this up as camp, opting to go for something if not completely comedic at least as something like a lark.  Palicki, bless her, I think made a sincere effort to be serious, making their scenes together all the more bonkers.

I'm not going to trash the costume simply because I think the costume trashes itself.  I am going to trash how blatantly Wonder Woman opts to kill, to torture, to be rather reprehensible.  At one point, she tells the poor black teen that he needs to get better, and to leave the vengeance to her.

"I'm pretty good at it," she confides to him.

Since when was Wonder Woman about 'revenge'?  I thought she was about justice.

Then again, I'm not as smart as David E. Kelley.

Either Kelley didn't understand the source material or thought he was above it somehow (intellectually, artistically, whatever).  Even leaving aside the technical aspects the unaired pilot has (the visible wires, which I'm not faulting it for since that is removed in post-production), Wonder Woman itself is riddled with bad acting, a bizarre story that is jumbled and downright silly, and simply insults fans and casual viewers simultaneous.

You ARE a wonder, Wonder Woman...a wonderful bit of accidental comedy.