Boo! A Madea Halloween: A Review 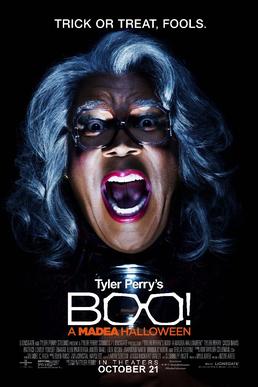 Having already tackled Christmas, our most famous African-American female (after First Lady Michelle Obama) has tackled the spooky holiday of Halloween.  As we await Madea's Hanukkah Hijinks, we get Boo! A Madea Halloween.   Truth be told, I'm a bit conflicted when it comes to this latest Tyler Perry production.  I did laugh, which I think was the point of a lot of this.  The laughs, however, didn't come strictly because it was actually funny.  It was more because it was so flat-out idiotic that it caused me to laugh.  A part of me thought that Perry was spoofing horror films (and the current fixation with crazed clowns).

Another part of me was wondering whether he was trading in on old stereotypes and treating his characters as downright fools to where all that was missing was Stepin Fetchit to pop out and do a little dance.

Brian (Perry), a weak-as-toast and overprotective father, does not want his daughter Tiffany (Diamond White) to walk past the Upsilon Theta Fraternity House (better known by their Greek initials, YO).  Tiffany does not care what her weak-willed father wants, since she can walk all over him and does so with impunity.  Only her best friend, Preacher's Kid Aday (Liza Koshy) has any sense of doubt as to Tiffany's latest plan.

While walking down the YO house with two other tart-friends, Rain and Leah, the frat guys all invited them to their kick-ass Halloween party, the dimwitted guys unaware that they are all seventeen (and thus, underage).  Encouraged to wear something sexy for their costumes, Tiffany wants desperately to go, with Aday more reluctant.  Of course, there is the issue of getting past Brian.

Enter Madea (Perry again), who is with I assume her sister Bam (Cassie Davis).  Bam, who is delighted to have her 'prescription' for medicinal marijuana, is sitting outside her house passing out candy, much to Madea's displeasure.  Bam is actually doing a bait-and-switch on the tykes: appearing to put in candy but really reaching into the bags to grab some of THEIR candy.  One of the trick-or-treaters gets wise to this, which unleashes a barrage of insults by Madea (who knows perfectly well what's going on).  Brian calls Madea up to watch Tiffany and Aday for the night (Brian discovering Tiffany's schemes).

Madea goes only after promises of money, and Bam, along with Madea's brother/Brian's father Joe (Perry once again) and their friend Hattie (Cassie Davis) tagging along.  Tiffany gets wise to her father's scheme and tries to scare the old people by telling them that a "Mr. Wilson" committed murders in the house on Halloween and comes back to haunt the place...except the bedrooms. While they don't bite, they aren't as attentive as they should be and Tiffany & Aday sneak off. Madea is many things, but a fool ain't one of them.   She quickly realizes they snuck off and goes to the frat house to get them back.  The dimwitted frat guys at first think Madea and her friends (Joe opting to stay home and smoke some weed) are in costume, but soon realize that these old people are for real.  The three women appear to start actually mixing into the remarkably dull Halloween party (even with Tyga in a cameo as himself) until Madea, irritated by their refusal to help, literally pulls the plug.  The frat guys promptly throw her out, which enrages Madea.  Taking the other women with her, she decides to call the po-po to tell them that underage girls are at the party.

No need, as while Dino (Mike Tornabene) is with Aday, the good girl tells him she's seventeen, horrifying someone even as stupid as him.  He quickly runs to the YO President, Jonathan (Yousef Erakat), who is with Tiffany, and he too is shocked.  They all realize that having underage girls at their party will get them at the very least suspended from college, but making matters worse, the po-po have arrived and shut the party down.  Discovering that Madea and her group were behind this, they plot revenge.  Unbeknown to them, Aday, who's been hiding, overhears their plans.

The rest of the movie involves the frat guys pulling pranks to convince the old, scared black people that ghosts and clowns and zombies are after them, and of course it works.  It isn't until Madea runs to the church and 'accepts' Jesus Christ that the preacher comes out, along with the repentant Aday, who reveals all.  Now it's time for MADEA to get even and give both Tiffany and the frat guys a comeuppance they won't soon forget.  Tiffany also learns a valuable lesson on the importance of parental guidance and respect for her father.

It's an almost fascinating thing to see how Perry attempts to mix the broadest, silliest of comedy with a touch of moralizing.  On one hand, you have these excessive caricatures of people, young and old (are frat guys really that dumb? are old people really that dumb?).  On the other, you have a message that parents should not be their children's friends, but their parents.

It's amusing to see this group of seniors berate their child for not raising his own child the way they raised him.  Granted, this collection had no problem being wildly abusive (Joe, for example, recounts with glee how he threw Brian off a roof), but somewhere in all this mayhem, we get what we're supposed to understand is the 'message': good parenting has no substitute.

In the mix is a very bad sense, at least for me, that Perry may be mixing mirth with stereotypes.  The idea that these old black people were 'afraid of ghosts', and would be so gullible as to possibly imagine there were such things, complete with eyes bulging out and them screaming for the hills, somehow didn't sit right with me.  It troubled me that people were portrayed with such broad strokes.  Granted, a Madea film isn't known for its subtlety, but again, something about that just didn't feel right.

I also grant that a Madea film is not meant to be taken all that seriously (Diary of a Mad Black Woman being a rare exception), so I cut it some slack.  Certainly we see this with how the frat guys are.  Despite protests to the contrary, this party looks rather lame (and as for Tyga's cameo, all I could think of was how low is his career to be playing a FRAT PARTY.  Serves him right for not letting Sir Paul McCartney into his after-Grammy party).

If I look at it analytically, I don't think people go into a Madea film to see great acting.  There wasn't.  Of particular note were Erakat and Tornabene as Jonathan the YO President and his sidekick Dino.  I understand they are 'YouTube stars'.  I'm simply too old to accept the notion that there is such a thing as 'YouTube stars', so having no idea who they are (and truthfully, not caring) they were amateurish in whatever they can call 'acting'.  Tyler Perry alums (along with Perry) were broad, but that's what I figure they were meant to be.

I'm not going to lie and say I didn't laugh.  There were moments of humor (Madea quoting from Oprah's speech in The Color Purple when going up into the attic, one of the frat guys calling Brian "Old Man River", though I'd question how that frat guy would know the reference), but it was a silly, almost idiotic funny.

A good time can be had at Boo! A Madea Halloween, if one goes into it acknowledging that we're not getting anything particularly great, clever, or original.   Minus the mocking of the current 'scary clown' business, this is not a good film.  It's not quite a romp, but not a horror.