Gotham: Look Into My Eyes Review

GOTHAM: LOOK INTO MY EYES

Gotham, for good or bad, does have a bit of a problem: how to get Batman villains without bringing Batman into the mix.  After all, the future Dark Knight is still a sixteen-year-old boy barely learning about the dark side of life.  So far, they've managed to make the introduction of some of the Batman villains believable while not overdoing things (think Penguin, Riddler, Catwoman).  We now get a new Batman villain: The Mad Hatter (although he is not called that, at least not yet).

Come to think of it, with the exception of The Penguin and Mr. Freeze (whom I hope will still return), the common names of our master criminals haven't been used, but I digress.

Look Into My Eyes is a strong introduction to our newest villain, while throwing in more mysteries and even not-so-wry political commentary.

There's a new hypnotist act in Gotham.  It's Jervis Tetch (Benedict Samuel), who thrills audiences with his powers of persuasion.  Even Bonkers Babs (Erin Richards) and mistress Tabitha (Jessica Lucas) are a bit frightened of him.  Jervis, for his part, uses his powers to provide for shelter...by having the man he had hypnotized earlier kill his wife and himself.

Jervis, however, is in need of a good bounty hunter, someone like Jim Gordon (Ben McKenzie).  Jervis is searching for his sister, Alice (Nainan Gonzalez Norvind).  She was part of Hugo Strange's lair of horror, and Jervis wants her found.  Alice, for her part, does not want to be found.  She knows she's dangerous: her blood being poisonous to anyone who comes in contact with.  Gordon eventually finds her, but she gives him the slip.  For his part, Jervis will not be denied.  He uses Gordon's vulnerabilities involving Lee Thompkins (Morena Baccarin) to induce him into hypnosis, getting him to almost kill himself.

Yes, Dr. Thompkins has found a new man, a doctor no less.  He's Mario (James Carpinello).  While it is clear that Mario is a good guy, it is unclear whether he uses his family name...Mario Falcone, son of Don Carmine Falcone (John Doman).

In the other subplots, the doppelganger to Bruce Wayne (David Mazouz), whose only identity is of 514-A, has found shelter of sorts at Wayne Manor, much to the worry of Alfred (Sean Pertwee).  "Number 5" (Mazouz in a dual role) appears to be hesitant, confused, but he is also intrigued by Bruce's relationship with Selina Kyle (Camren Bicondova).  She's come to Bruce for help in searching for her friend Ivy.  Bruce, worried about "Number 5", declines to help.  "Number 5" decides to jump in, by impersonating Bruce and help her out.  She is a bit puzzled, but she goes along.

Our deal Oswald Cobblepot (Robin Lord Taylor) has decided that Gotham needs him.  He goes to a press conference for Mayor Aubrey James (Richard Kind) and declares his candidacy for Mayor of Gotham.

He even has a tagline: Make Gotham Safe Again.

The cleanness of the mayoral race is to be determined, given that both James and Cobblepot are not afraid to show a little muscle to get their way.  Cobblepot, however, has an ace up his sleeve.  No, not his right-hand henchman Butch (Drew Powell), but his new bestie, Edward Nygma (Cory Michael Smith).  Penguin has cajoled the Arkham Asylum director to declare Nygma sane and release him.  Penguin goes to pick Nygma up personally as is delighted to see his old friend once again.

Perhaps it is the Penguin for Mayor Campaign that should be one to watch, but more out of concern over where Gotham will go than for whether it is a good idea.  Those of us old enough to remember Batman Returns will have flashbacks, given that that version's Penguin also ran for mayor as a major part of the plot.  Those of us who shudder at this years Presidential election are aware of one candidate's slogan to "Make America Great Again".  As much as I thoroughly detest said candidate (I'm proudly #NeverTrump), the similarity bothers me, as if Gotham was taking sides.

If James' slogan was "I'm With Him", then maybe I wouldn't object. 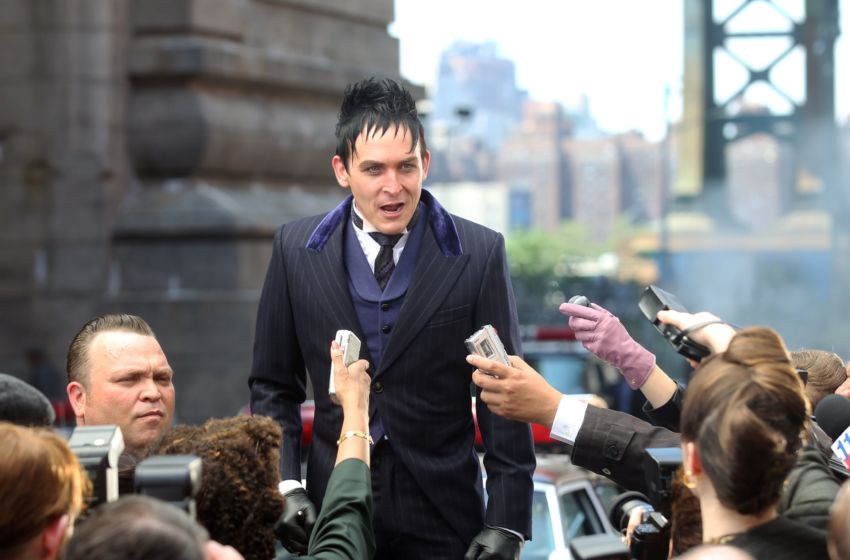 Be that as it may, I do wonder where and how long the Cobblepot for Mayor storyline will go.  This remains to be seen, but truthfully, I'm not big on it.

What I am big on is how Gotham is weaving two good stories in here.  The first one is the main one, with The Mad Hatter (down to having Alice in the mix).  Samuels is strong as Tetch, keeping his character creepy without going over-the-top.  So far, we are getting the pieces between Tetch, Alice, and Gordon together in a believable way.

Perhaps the best performance is from Mazouz as both Wayne and "Number 5".  Mazouz manages the alterations of his voice, his facial expressions, and the confusion he creates for Selina, intentional or not.  Is he villain?  Is he up to some nefarious acts?  Something if not wicked at least bizarre this way comes.

Bicondova is similarly excellent in her scenes with Mazouz.  When she comes to Bruce, Bicondova shows that rare hint of vulnerability that indicates that for all her exterior toughness, there is still a hurt person, fearing for her friend, angry at her on/off.

The twists in this wild mayoral campaign were good, and in this episode the only thing kind of weak is the Lee/Mario storyline.  Somehow, her love life doesn't seem that interesting.  Having a romance with someone she knows is connected with the Mob (even if Mario himself is a civilian...little Godfather reference there) seems downright nutty.

Still, with a strong story around a new villain (one that makes even a pair as crazy as Babs and Tabitha...Tabra? have second thoughts), we get something that keeps pushing Gotham into a stronger, more confident direction.

Next Episode: New Day Rising
Posted by Rick at 3:04 AM