Bless them for trying, but Jason Bourne proves the theory about The Bourne Legacy wrong: the character of Jason Bourne can be in a Bourne film...and still fail.

A plot recap is a bit tricky, given a.) how convoluted a lot of things were in the beginning, and b.) how Jason Bourne asks that you know or remember a lot of what happened in The Bourne Identity/Supremacy/Ultimatum.   I'll give it a try nonetheless.

Jason Bourne (Damon) is in the international version of Fight Club, brawling throughout Europe to make money/forget/remember what happened to him, having flashbacks every now and again.  The CIA would still like to grab him, but from what I see does not make it a top priority.  That is until Nicky Parsons (Julia Stiles) downloads more nefarious material from Langley, including information about Jason's father who may have had a deeper hand into Jason's assassin ways.

Talk about The Bourne Legacy!

CIA Director Robert Dewey (Tommy Lee Jones) is apoplectic about this breach, and wants both Bourne and Parsons terminated.  The CIA officer who both discovered the breech and is the tope expert on cyber-security, Heather Lee (Alicia Vikander) would rather get them captured, convinced that Bourne can be brought back into the fold. Enter Asset (Vincent Cassel), master assassin whom Dewey entrusts to finding and exterminating the meddlesome Bourne and Parsons.

In the chaos of a violent Greek protest, Asset manages to kill Parsons (as a side note, despite how she is not the star she was before, I figure Stiles is happy not to have to come back to any future Bourne films), but unsurprisingly fails to kill Bourne.  It's a globe-hopping tour as Bourne continues to attempt to discover the truth about his father, who was killed in Beirut, as well as expose another CIA operation, Iron Hand.

Dewey has also made a secret deal with Mark Zuckerberg-like social network billionaire Aaron Kalloor (Riz Ahmed).  Kalloor is publicly all about Internet privacy, but privately has given Dewey access to his user's information in exchange for financial assistance in starting his company, Deep Dreams.  Kalloor wants out of his deal, going so far as to threaten to go public.  Those words are like waving a red flag at a bull, and Dewey now plots to get at Kalloor too.

Jason Bourne finds an unlikely ally in Lee (the new hoped-for series' Nicky Parsons), who also distrusts Dewey.  She has been given the go-ahead to try and take him in London, but Dewey secretly tells Asset to exterminate all those who get in his way of killing Bourne (except for the dupe Lee).  Despite his best efforts, Asset is unable to get at Bourne himself, and now Bourne meets with Lee personally, and she gives him information about Dewey's next plan, which will take place in Las Vegas.

It's off to Vegas to get at Dewey and bring him down.  Dewey has plotted to go all-Manchurian Candidate and have Kalloor assassinated while giving a talk at an Internet expo, with Dewey taking a bullet to make it look good.  The CIA becomes aware that Bourne has shown up, and that he has had some kind of help from the inside.  In a rage, Dewey orders Asset to assassinate Kalloor and Lee, but Bourne gets in the way.  Eventually, it is Lee who kills Dewey while saving Bourne, and Bourne then gives chase to Asset through the Vegas Strip for an ultimate showdown.

In the aftermath of all this, Lee rises higher, but Bourne still does not trust her.  He lets her know this by playing a recording he made of her secret conversation with the new CIA head, where she urges them to try to bring him back, and if that fails, to kill him. 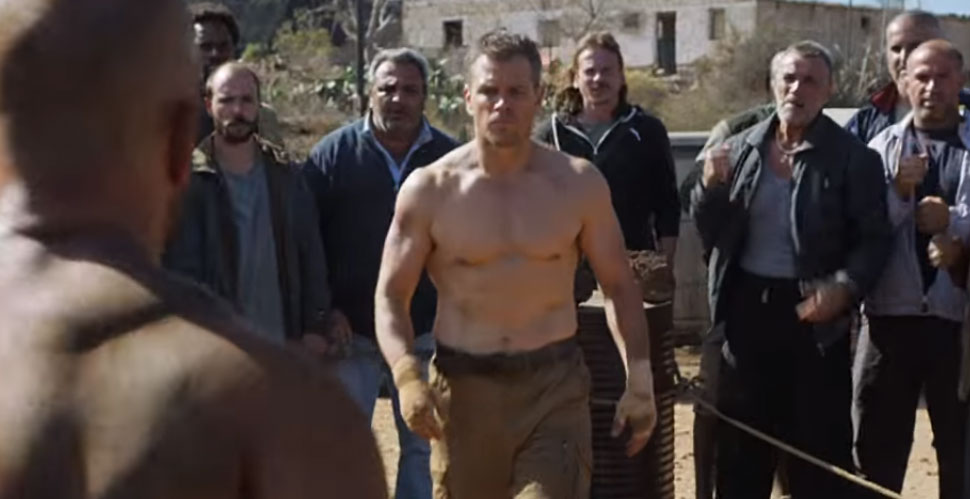 I can tell you that I figure the Vulture count is closer to the truth, as Damon has, from the time he first actually meets Lee in London to the final scene, exactly...TWENTY lines total.  Granted, I started counting pretty near the third act, but even by Bourne standards, this taciturn portrayal, like the film itself, veers dangerously towards parody.

As a side note, I can understand why Cavill was given as few lines as possible: reason being he cannot actually act so it was best to minimize the damage (though he'd make a great silent film star).  Damon, however, can act, so the fact that Greengrass, who co-wrote the screenplay with Christopher Rouse, made Bourne into a very silent figure must have been a deliberate decision.

More so when you remember Damon is a producer of Jason Bourne.

As in The Bourne Legacy, the character of Jason Bourne appears to be a non-entity, a plot device to get things going.  So much time is spent on the battle between Dewey and Lee, on Asset's machinations/assassinations, and even on Dewey v. Kalloor that one wonders if THAT was the reason Jason Bourne stayed quiet for long stretches.

I haven't seen Ex Machina or The Danish Girl (for which Vikander won the Best Supporting Actress Oscar, the latter film unseen because Eddie Redmayne tried to "drag" his way to a second Oscar for himself after that shameless mechanical performance in The Theory of Nothing, but I digress).  I cannot therefore, say how good an actress Vikander is, but she must have been better in those than in Jason Bourne, for few CIA agents can come across as so dull and lifeless.

Actually, I can make some kind of judgment on Vikander, having seen (but not yet reviewed) The Light Between Oceans, and after seeing that, I begin to despair as to what kind of actress she is.  I also forgot she was in The Man From U.N.C.L.E., but then again most of the world has forgotten that horror too, so I can't be blamed for finding her forgettable.

Jones could do this kind of role in his sleep (and at times I suspect he was asleep).  As for Damon, well, he too did what was hard to imagine: make Jason Bourne a rather dull fellow.

There were a few good pieces in Jason Bourne.  The Athens riot sequence was a bright spot, and the closing sequence in Las Vegas, while at times wildly over-the-top, was also I thought a highlight.  Pity that Greengrass decided to double down on the chaotic shaky-cam and wildly gyrating camera that made things harder to follow (or harder than they already were given how the plot didn't help you sort things out for a while).

Jason Bourne, like Matt Damon, is starting to show his age.  Perhaps they think by making something that comes close to spoofing itself they will get more Bourne films.  Perhaps it is time to let this spy stay out in the cold.