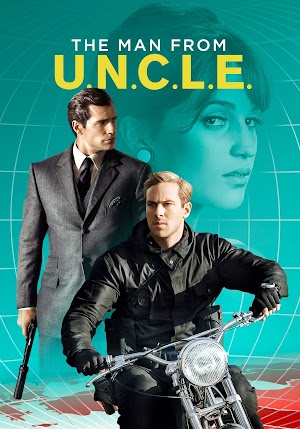 At first, I thought the reason I was falling asleep during The Man From U.N.C.L.E. was due to a lack of sleep.  Then I realized that the real reason was because I found the movie boring.

Napoleon Solo (Henry Cavill) is a master thief who, under duress, is forced to work for the CIA, becoming one of their best operatives.  His latest mission is to extract Gaby (Alicia Vikander), an East German mechanic whose father, "Hitler's favorite scientist", has now gone missing.  Hot on his pursuit is Ilya Kuryakin (Armie Hammer), a KGB agent who has a volatile temper and massive strength.  After Solo's successful mission, he is surprised to find himself paired with the crabby, short-fused Kuryakin on a joint Soviet-American mission.  The two superpowers have united against a common enemy: former Nazis who have taken Gaby's father to have him make a nuclear bomb.  Neither "Red Peril" (as Solo calls Kuryakin) or "Cowboy" (as the Ruskie calls Solo) are thrilled with this arrangement, but it has to be done.

Therefore, the three of them go off to sunsplashed Rome for their undercover work.  To explain Gaby's leaving East Berlin, she is passed off as Kuryakin's fiancée, who is passing himself off as a meek Soviet architect.  Solo, for his part, returns to his master-thief ways and soon they set up mad Fascist sympathizer Victoria (Elizabeth Debicki) and her husband, Alexander (Luca Calvani).  Solo charms Victoria both physically and materially, his skills perhaps useful to increasing her antiquities collection.

Pretty much after that I went in and out of consciousness, but from the parts I remember, the bomb is made, a British agent named Waverly (Hugh Grant) pops in too, Gaby appears traitorous, the boys don't quite bond but do give odd hints of...something, and we're set up for a sequel.

﻿
I don't know why anyone thought that a television show few people who aren't at least in their 50s now would remember anything about would end up being something Millennials or Gen Xers would flock to see.  It isn't that I can't appreciate the idea that director/co-screenwriter Guy Ritchie (who worked on the screenplay with Lionel Wigram) was going for.  I figure he was going for a breezy, fun, comic action romp.

It's just that there isn't much in The Man From U.N.C.L.E. that is breezy, fun, comic, action, or a romp.  One of my Golden Rules of Filmmaking is that There Should Be a Maximum of Three Writers.  While Ritchie and Wigram are the credited screenwriters, there are a total of four people who came up with a story, a simply astonishing number given that the film is based on a 1960s television series that I venture to say the target audience (those born between 1970-2000) probably have never heard of.  This isn't like Mission: Impossible, which was 'grittier' I imagine, than The Man From U.N.C.L.E. (I think Joan Crawford once did a guest spot on the show, which should indicate what kind of show it was).  My suspicion is that there were more people working on what should have been (and actually ends up being) a very simple story.

It just isn't just that the story we end up with is rather dull (save for the opening East Berlin chase).  The leads too can't appear to muster even the vaguest of interest.  Let's start with Henry Cavill.  I fully recognize that Henry Cavill is a breathtakingly beautiful man, so beautiful he could tempt any man to consider the alternatives, so to speak.  He also has absolutely no business appearing on the screen if it is in the form of an actor.  Solo is 'unflappable', if by unflappable you mean 'showing no emotion whatsoever regardless of circumstances or situations', then Cavill's total lack of range is perfectly suited to his non-talents.  Regardless of the situation, Cavill has the same blank expression, even when he rescues Ilya.  He doesn't look like he even cares about Ilya, or even the sandwich he was eating while Kuryakin was being chased by the villains.

Now, I'm not going to bash Hammer as much.  Here is why: he can act.  Granted, most of his best qualities, like Cavill's, are more connected to his looks than on his thespian prowess, but he was good in The Social Network.  After that, though, well, he's hit a bit of a rough patch, and The Man From U.N.C.L.E. isn't going to help any.  Now, I didn't think his Russian accent was horrible.  I just thought it made it look like he thought he was doing Uncle Vanya rather than The Man From U.N.C.L.E.  It felt a bit off, as if Hammer thought what this action/comedy needed was someone so terribly serious, someone with real anger management issues that if they were meant for laughs, failed spectacularly in delivering them.


I'm also calling The Man From U.N.C.L.E. out for the almost unambiguously gay pairing of Solo and Kuryakin.  NO ONE writes the following without going for overt calls to these two being lovers:

Oh, sure, they were referring to locks, but I think the film shouldn't treat the audience as imbeciles.  That line, however, did wake me up, so there's that.

And that's not mentioning their very bizarre arguments about what types of clothes Gaby is suppose to wear.  Since when did Soviets know all about the latest haute couture?  Their discussion is emblematic of almost all wrong with The Man From U.N.C.L.E.: Gaby is essentially ignored as these two himbos argue about belts and purses.  It isn't funny, and it makes everyone seem like cardboard figures, walking mannequins who are really beautiful to look at but are hollow inside.

Worse, whatever 'comedy' the film goes for sinks in its own obviousness.  There is a scene late in the film where the two are discussing what to do with the mad scientist while unbeknown to them but clear to us said mad scientist is being slowly killed by his own device.  The fact that we know what's going on but these two dolts don't doesn't make it funny.  It makes it all so boring.  The way the film jumps back and forth in time to try to show off its own cleverness is equally clumsy.

I'll say this: Debicki is one of my favorites (a bright spot in The Great Gatsby, which I confess to liking while fully aware of its flaws).  She seemed to get that everything was suppose to be idiotic and played Victoria like the nut we figure she is.  Grant too is a bright spot as Waverly, popping in and out in his slightly bemused, slightly befuddled manner.

Apart from that The Man From U.N.C.L.E. has pretty clothes and extremely pretty people, but pretty much about it.  I know Debicki and Vikander will go on to better things because they have the talent for it.  Hammer, I'm on the fence about: someone who might be a good actor but who hasn't found something that can actually prove it.  As for Cavill?  Yes, even I think he's gorgeous, but in his case, he's best suited to the strong, silent type.  Operative word: SILENT.

I won't cry 'uncle', but if anyone actually makes a sequel, I'll just cry...for the whole of Western Civilization.