We've had some time to digest the nominees for the 88th Academy Awards.  As to be expected, we got some surprises, some snubs, and an all-white cast.

This #OscarsSoWhite business is highly amusing to me, since Hollywood loves to talk about 'diversity' but consistently fails to apply the laws it wants on others to themselves (like Congress). I'm sure all twenty acting nominees will publicly bemoan the fact that not one of them is non-white...yet not do much to change anything on-screen itself.  Will they push to hire minority actors?  Will they seek out scripts that make them supporting players to a black or Hispanic actor/actress or a minority director (Alejandro G. Inarritu being the rare exception)?

Best Actor nominee Matt Damon is perhaps the most appropriate member of the Class of 2015 Nominees given he represents all that is remarkably clueless about films and real diversity. Was it not Damon who explained to (or perhaps, lectured at) the only black and only female on his Project Greenlight program that diversity should apply ONLY to the casting of the film, not the casting of the show? In other words, so long as there is diversity among the cast, whomever is directing, writing, producing, or doing anything behind-the-scenes could remain exclusively Anglo.  Whites, in Mr. Damon's worldview, are as capable if not more capable of telling black stories, or Hispanic stories, or in Crappie Redmayne's case, transgendered stories, than actual blacks, Hispanics, or transgendered people.

Were there no black performances worthy of a nomination?  The Academy thinks so, despite the high praise for Idris Elba in Beast of No Nation and Michael B. Jordan for Creed.  I don't think the problem is the lack of good black/Hispanic talent (since for some time Benicio Del Toro looked like he could get a nod for Sicario).  I don't even think it is necessarily because there are so few black/Hispanics in positions of power in Hollywood.

I think the problem is in the people making the movies themselves.  The studios stubbornly insist that minorities themselves are monolithic, that all blacks and Hispanics are the same. Worse, they appear to think that blacks/Hispanic stories simply aren't interesting to a wider audience.  They don't see diversity because Hollywood doesn't have diversity to begin with.  I'm willing to wager that nominees like Redmayne just don't know a large group of people different from themselves.  The bubble they live in is so great that they honestly think the world looks like they do.

As a side note, this might explain why so many in Hollywood are not only liberal, but cannot comprehend why people in 'flyover country' could possibly be conservative.  Since those making films like Damon have such a low opinion of those who think differently than they do politically, my sense is that these same people cannot understand why say a film like Selma (with its universal appeal to all Americans) should have been nominated rather than the more 'posh' The Theory of Everything (about as shameless an Oscar-bait film as I've seen).  Sure, Selma may have been about Martin Luther King, Jr., but The Theory of Everything was about an Oxford don...who couldn't WALK!  Now THAT'S ACTING!!!

It looks like the studios have not moved from the times of 'race films', where all-black casts were put together to make films marketed towards exclusively black audiences.  I seriously doubt Cabin in the Sky was meant for New Brunswick or New Braunfels.  My sense is that today, films like Ride Along are similarly thought of as 'urban' (read, ghetto/barrio), good for the company's coffers but not good for anything else.

Is there a way to fix this problem?  I don't support quotas, so that's out.  Is it in having more minorities in actual positions of power?  That's a start.  It is going to take the idea that blacks and Hispanics are actual Americans, part of a whole, not something separate.  Until such a time as Hollywood recognizes that a.) blacks/Hispanics have stories all families can relate to, and b.) Hollywood doesn't try to keep putting black/Hispanic-centered films in a separate genre, this situation will keep plaguing not just the Academy, but the film industry as a whole. 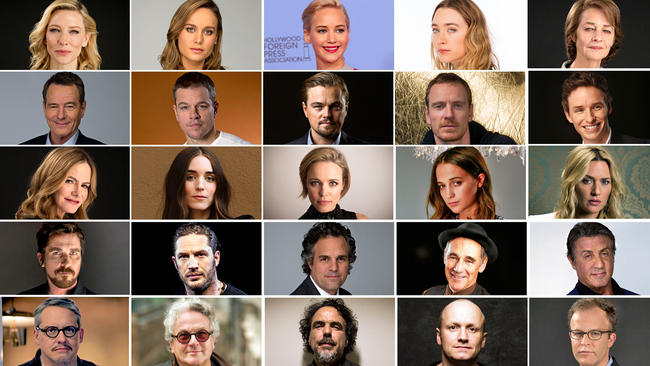 Now, as for the nominees themselves.   So far, I think it's Best Actress: Brie Larson, Best Actor: Leonardo DiCaprio, Best Supporting Actress: Jennifer Jason Leigh, Best Supporting Actor: Sylvester Stallone.  That would mean that all four acting nominees would be from four different films, and there's no guarantee that The Revenant will get Best Picture.

Spotlight I think is the one that has the best chance right now.  I can cut The Martian and Bridge of Spies out pretty much from the get-go.  Why?  No Best Director nods for them, and seriously, if Ridley Scott can't get a Best Director nomination at this point, there's no way The Martian will win.  I know many thought Mad Max: Fury Road is this masterpiece of cinema (even my own group), but my mind is convinced the stodgy Academy (overwhelming white, male, and most importantly, OLD) is not going to put Mad Max: Fury Road on the same level as Casablanca or Schindler's List or All Quiet on the Western Front (and I suspect a few Academy members actually do remember World War I).  Room surprised with a Best Director nod, but I just don't see it.  Oddly, The Big Short is becoming the main competition to The Revenant given that a film about the housing market meltdown doesn't seem "Academy Award" worthy.  Unless The Big Short can pull a rally, I sense the fight will be between The Bear and The Press, with the latter slightly ahead.

IF there are any real locks, I think the first is Brie Larson for Room.  Cate Blanchett doesn't have to worry about Rooney Mara splitting votes from her (the latter safely tucked away in the Supporting category), but the former frontrunner is facing the upstart.  Ironically, Jennifer Lawrence serves as informal inspiration for Larson, for Best Actress tends to love the fresh new face.  Sorry, Charlotte.  Enjoy the parties.

The second lock is almost certainly Sylvester Stallone for Creed.  Best Supporting Actor has tended to be almost a de facto Lifetime Achievement prize, and Stallone has weathered highs and lows in his career.  That standing ovation at the Golden Globes shows just how beloved he is now, and sentimentality may carry a lot of weight.  HOWEVER, everyone seems to think highly of Mark Rylance in Bridge of Spies, and this might be a good place to give that film a prize.  I cannot hold that the perennially grumpy Hardy will charm anyone into voting for him (he seems more likely to punch people at the Awards Luncheon than schmooze them), and poor Mark Ruffalo will see himself lose two years running.

Best Actor means only one thing to me: Eddie Redmayne is going down in flames.  I predicted that if The Danish Girl didn't get a Best Picture nomination, Redmayne's calculated efforts to get back-to-back Oscars and feed his ego about his idea he's his generation's Peter O'Toole were dead.  Guess what?  The Danish Girl didn't get a Best Picture or Best Director nomination, so the once presumptive winner is now an also-ran.  Like I had also said, he faces two competitors who won't bend to his gender-bending.  DiCaprio is the frontrunner only because there's this idea that "it's his turn", to where I wonder if it mattered how good or bad either DiCaprio or The Revenant were.  While DiCaprio seems to be the favorite only in a 'let's give it to him for SOMETHING' mindset, we also have to consider Michael Fassbender, who has been getting lots of love for Steve Jobs.  By no means does this mean that Fassbender will pull it off.  It just means he has the best chance of pulling it off.  Damon can't, and Bryan Cranston's goal to be an TOE (Tony, Oscar, and Emmy winner) will come for naught.  As for Redmayne, I think voters will think "he's got one already, and he got one last year, and Leo doesn't have any..."

Best Supporting Actress is generally crazy.  I am one of those who has never thought Kate Winslet is the GRANDE DAME OF ACTRESSES she certainly sees herself as.  I grant that she has a good shot, but right now too many are thinking of Jennifer Jason Leigh for The Hateful Eight, which got a LOT of hate with only three nominations (Supporting Actress, Cinematography, and Original Score...and how I'd love to see Ennio Morricone win on his sixth nomination with no win yet).  That lack of nods could hurt JJL, since if The Hateful Eight wins anywhere, I think it will be for Original Score, which might be seen as reward enough.  No Original Screenplay or Director nomination for Quentin Tarantino actually weakens her.  Spotlight's Rachel McAdams' nomination is perhaps the biggest surprise of the list, since I had heard no mention of her in any predictions.  It will be Winslet vs. Leigh, but I can't make a call one way or the other.

Finally, in Original Song.  Seriously, The Writing's On the Wall from SPECTRE?  Did any of them actually HEAR the song?  It's DREADFUL!  I blame this nomination on all those who proclaimed Adele's Skyfall THE GREATEST SONG EVER WRITTEN IN THE HISTORY OF ALL MANKIND, so great that Dame Shirley Bassey should be taking singing lessons from Adele about how to do a Bond Song.  All these people who insisted Skyfall (with its inane lyrics) was better than Nobody Does It Better or Live and Let Die...or Over the Rainbow, or Amazing Grace, or The Star-Spangled Banner, or Ode to Joy allowed the floodgates to any equally idiotic Bond Theme to be nominated.  Thus, we got the perennially sad Sam Smith singing about how Bond is so emotionally needy and weak.

Thanks, Adele.  I defy people to sing me even the chorus to Skyfall now, let alone the actual lyrics, with such brilliant pieces of writing like "For this is the end/I've drowned and dreamt this moment/So overdue I owe them/Swept away I'm stolen".  Bet no one could remember those lyrics that Gershwin and Berlin probably would look on with envy.

Really?  THAT'S better than Nobody Does It Better?  Curse you, Adele!

Well, that's it for now.  I'm not giving actual predictions because I always end up changing them.

One thing I know for sure: when Eddie Redmayne loses, I'll be the one doing a Happy Dance.
Posted by Rick at 10:48 PM