GOTHAM: A BITTER PILL TO SWALLOW

On this episode of Gotham, we get primarily two stories: the one between Ben McKenzie's Jim Gordon versus now Mayor Theo Galavan (James Frain) and that of the very Odd Couple Edward Nygma (Cory Michael Smith) and Oswald Cobblepot aka The Penguin (Robin Lord Taylor).

As a side note, did the bond because they each have three names?

In any case, A Bitter Pill to Swallow does a great job balancing these two stories and sets us up for an amazing conclusion to the first half of the season...if it doesn't bungle the job.

Oswald, still an emotional wreck from the loss of his mother before his eyes, has been taken in by Ed to recuperate from his wounds emotional and physical.  Of course, Ed's actions aren't all altruistic.  Ed needs someone to act as a mentor to his new murderous traits as well as a buddy with similar tastes, going so far as to abduct an associate of Galavan's as a treat for Ozzie.  Cobblepot, for his part, wants nothing to do with any of this, still beyond consolable at Gertrude's murder.  Eventually, Ed makes Oswald realize something, a bitter pill to swallow.  "For some men, love is a source of strength, but for you and I it will always be our most crippling weakness".  Only now does Penguin see that his mother's love, while a great source of comfort for him, was holding him back, the Achilles' heel that others could get at him with.  With her gone, he is invulnerable.  The same applies to Edward, who with his killing of Kristen Kringle, the girl of his dreams, who could not fit into his own darkness.  With Penguin finally seeing the light, he embraces life again...down to having some fun with the poor abductee.

Meanwhile, Jim Gordon finds himself the target of various hitmen at the bidding of Theo's sister Tabitha (Jessica Lucas), who has put out a contract to whomever can kill the meddlesome detective.  The go-between is The Lady (Michelle Gomez, formerly the illegitimate bastardization known as the False Master of Doctor Who infamy).  The Lady sends out at least two hitmen to go after Gordon, but they fail (though they do come close to getting at Captain Barnes, played by Michael Chiklis).  Barnes, who like Gordon is a war veteran, sees that Gordon is slipping into vengeful vigilantism, and manages to pull him from the brink.  In desperation, The Lady calls Eduardo Flamingo (Raul Castillo), a hitman so grotesque even The Lady finds him appalling and had banished from her establishment.  Something to do with his cannibalism, I think.  However, The Lady is desperate to fulfill the contract, and knows that Flamingo will be thoroughly ruthless.  It's a total assault from Flamingo, and Gordon comes close to enacting justice when he puts a gun to Flamingo's mouth, itching to pull the trigger.  At the very last second, he pulls back.  Unfortunately for him, Flamingo goes on to kill the rookie arresting officer...by biting off her ear, which causes her to bleed to death.  Theo Galavan, already under arrest, is furious at Tabitha for disobeying his orders that Gordon was not to be touched, telling her that if she does this again, he will kill her.

Finally, Bruce Wayne (David Mazouz), still desperate to find what was in that file Galavan had about his parent's murder, attempts to reach out to Silver St. Cloud (Natalie Alyn Lind), Galavan's niece.  At this point, neither Bruce's manservant Alfred (Sean Pertwee) or Selina Kyle (Camren Bicondova) trust Silver.  Alfred outwits Bruce's attempts to sneak out of Wayne Manor, fully aware that Master Bruce was trying to pull a fast one.  Selina comes to him too, offering proof that Silver is in cahoots with Galavan.  Adding to the impending chaos is the arrival of the Sacred Order of St. Dumas, the Satanic cult of the Galavans who have sworn to exterminate the last of the Waynes for the sins of the ancestors. If A Bitter Pill to Swallow has a theme, it is that of whether one will take the road to the Dark Side of one's nature or pull oneself out.  We see this in the struggles of Gordon versus that of Cobblepot and Nygma.  Each of them is slipping to either their own darkness or their own light, and each has a chance of redemption.  Penguin at one point sees that his actions, his need to be The King of Gotham, has led to the death of the only person he genuinely loved, his failure to protect Gertrude bringing ruin on the only good thing he had.  Nygma, who has by now surrendered to the darkness and finds freedom in chaos and murder, is the one who pulls Penguin back into the Darkness, and now they have joined in an unholy union.

Gordon for his part, now has no problem dangling a man out the window and is fully prepared to drop him to his death.  This goes beyond anything Gordon's partner Harvey Bullock would do.  Bullock's hands are dirty, and he has no qualms with a nice bribe or doing dirty work for criminals like Fish Mooney.  However, to deliberately murder someone to feed a sense of revenge is something I don't think Bullock has done, or maybe could do.  Gordon, however, has reached a point where the smallest trigger could turn him into a criminal on the same level of Penguin.  Like Penguin, Gordon has someone to show him the possibilities, but unlike Penguin, Captain Barnes brings Gordon back into the Light.  "There is no line.  There is just the law," Barnes tells Gordon.  Unlike the unethical but still redeemable Bullock, Barnes has the mettle to coax Gordon into doing the right thing.

The fact that Flamingo ends up killing the rookie still gnaws at Gordon though, as if he cannot bear the fact that doing the right thing only brought death.  Gordon has something he hasn't had: a genuine struggle between his ethics and his drive for extra-judicial actions.  McKenzie I think has struggled at times to make Gordon anything other than a square-jawed moralist, but here McKenzie gives us an almost frightening look into Gordon's own darkness, with which Gordon has struggled with for some time now.  He still manages to pull back at the right time, but who is to know whether he will give in to those temptations later.

I think people know that I am a passionate RLT fan in his work as Penguin, and A Bitter Pill to Swallow allows him to really delve into Penguin's tortured psyche.  He too reached a crossroads, a man filled with regret and self-loathing, but who by the end returns stronger, more resilient, and more lost.  CMS equals him as the future Riddler, who finds that being bad can be so good.  The two of them have great rapport together and I'm glad that Gotham got our two best villains together in a logical way.

A Bitter Pill to Swallow might have gone a bit overboard in the 'hiring many hitmen' idea, and again, the whole violence factor is one that I find extremely troubling.  I just wonder why Tabitha didn't just go after Gordon herself, being an expert markswoman.  It also surprises me that Tabitha would so flagrantly go against Theo's expressed wishes when we've seen no evidence that she'd do anything like that.  Perhaps the fact that Barbara is now at Arkham Asylum under medical care sent her over the edge.

Well, I thought A Bitter Pill to Swallow really goes into tying the stories to a hopefully strong first half.  Judging by this hour's worth, Gotham has found its way, or at least isn't as lost as it was in Season One. 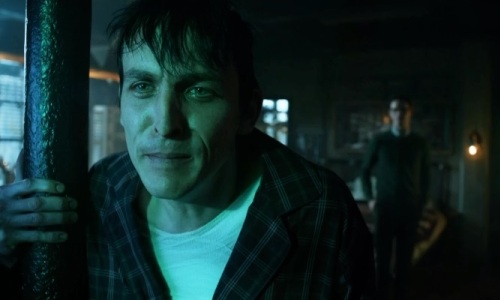 Next Episode: The Son of Gotham
Posted by Rick at 9:23 PM