For the 31st Academy Awards, we get perhaps one of the oddest television presentations, odd in that it actually ended 20 minutes EARLY.  In the future, the telecast will go on long past a rational time, but in this year, we got rushed through the awards that at the end, cohost Jerry Lewis was forced to do some wild stunts like trying to get the winners, nominees, and presenters to waltz on stage and try to perform with the orchestra.  Eventually, NBC cut to a gun safety film.

David Niven won Best Actor for around 15 minutes of screen-time in Separate Tables, making it one of the shortest performances to win a Leading Actor Oscar.  Gigi won a record-nine Academy Awards, ten if you count Maurice Chevalier's Honorary Oscar.  That's an impressive number for a musical that I don't think is that well-remembered now, and even more impressive when you consider that Gigi won without a single acting nomination.


As always this is just for fun and should not be taken as my final decision. I should like to watch all the nominees and winners before making my final, FINAL choice. Now, on to cataloging the official winners (in bold) and my selections (in red). Also, my substitutions (in green).

A Certain Smile: A Certain Smile
Gigi: Gigi
Almost In Your Arms (Love Song from 'Houseboat'): Houseboat
A Very Precious Love: Marjorie Morningstar
To Love and Be Loved: Some Came Running

I pretty much dislike all the songs nominated, though in fairness Almost in Your Arms has a pretty good cover from Sam Cooke.   The fact I went with the title song to Gigi should in no way be interpreted as an endorsement of the song itself, which I find one of the worst of Gigi's actual songbook compared to all the other Lerner & Loewe songs.  Why this particular song got selected when I think there were a whole slew of other songs better than Gigi I don't understand.

Almost in Your Arms (Love Song from 'Houseboat'): Houseboat
The Night They Invented Champagne: Gigi
I Remember It Well: Gigi
To Love and Be Loved: Some Came Running
Teacher's Pet: Teacher's Pet

From Gigi: I Remember It Well, music by Frederick Loewe, lyrics by Alan Jay Lerner.

Like I said, there were a whole slew of songs that would have been a damn sight better than Gigi from Gigi: The Night They Invented Champagne, I'm Glad I'm Not Young Anymore, Thank Heaven for Little Girls, and my personal favorite: I Remember It Well.  On the surface a comical song about how two people can remember things completely differently, it is also a song about regret, the loss of a chance for true love between our old ladies' man and our old courtesan.  They in a sense were trapped by society's expectations of them, in this case, fin-de-siècle Paris which didn't look kindly on married couples, let alone married couples in love with each other.  I Remember It Well is just so perfectly written:

We met at nine/We met at eight/I was on time/No, you were late/Ah yes, I Remember It Well.

If they met at nine, then he was on time, but if they met at eight, he was late.  I think it is so well-structured, and with such underlying nostalgia and loss, I can't help but think...seriously, GIGI?

Of course, I think that virtually every time I see it in the winner's circle, but I digress.

Richard Brooks: Cat on a Hot Tin Roof
Stanley Kramer: The Defiant Ones
Vincente Minnelli: Gigi
Mark Robson: The Inn of the Sixth Happiness
Robert Wise: I Want to Live!

I think Robson's nomination for The Inn of the Sixth Happiness probably came as a surprise, since it received no other nominations.  I think the fact that The Inn of the Sixth Happiness received any nominations is what some people remember about that film itself.  It's not a surprise that Minnelli won: Best Director and Best Picture tend to correlate.  HOWEVER, given that Gigi received no acting nominations, one can wonder what exactly they were rewarding him for.  The costumes?  The sets?  The music?  The joie de vivre?  The ability to get a story about a family of 'courtesans' who serve as mistresses to the rich past the censors?  Out of all the nominees here, I'm voting for the one that got some really great performances out of an adaptation that itself was highly altered to meet film censorship approval: the sordid Southern story of failed sports star Brick, his sexually starved wife Maggie the Cat, and the tyrannical Big Daddy, all waging war with everything they've got (or don't).

I remember using the treadmill at the gym once and watching Cat on a Hot Tin Roof.  During the film, I was so drawn into Brick's constant refusal to have sex with Maggie that I just burst out, "Oh, just JUMP ON HER ALREADY!"

Well, here's an upset! In a year that gave us Hitchcock's brilliant dark tale of repressed necrophilia and Welles' film noir, the Academy gravitated towards the pretty Gigi.  Now, while many I think hold Vertigo to be Hitchcock's greatest film (and for the record, it's my favorite Hitchcock film), in terms of directing I have to give it up to Welles.  The opening alone is enough to merit recognition, but there are subtle touches (such as when Welles' corrupt police captain realizes he's gone back to drinking) that are brilliant.  And we'll forgive that "Charlton Heston as a Mexican" thing.

There's not much I can say except for the fact that Separate Tables is an ensemble piece and I think Hiller is probably the best of the bunch.  I remember Cass' performance, and while good, I don't think Agnes Gooch was the best supporting performance in Auntie Mame. That would be Coral Browne's acid-tongued and vain but fiercely loyal Vera Charles, professional actress, professional lush.  I've flipped several times among all the nominees, because I think all of them gave great performances (and again, I wonder why no one from Gigi was singled out for their performance).  However, again and again I kept going back to Browne, who was great with the one-liners and did what a good supporting actor/actress does: elevate themselves while helping out the lead character.  Each time she and Rosalind Russell were together, I was constantly laughing.  Who Else But a Bosom Buddy indeed... 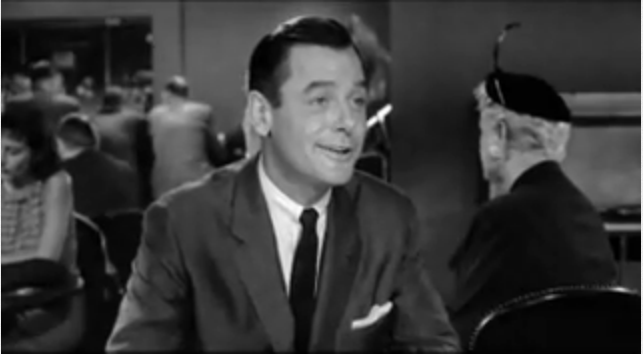 I can't understand the Academy sometimes.  They DIDN'T nominate Lee J. Cobb for his brilliant turn in 12 Angry Men, but they did for The Brothers Karamazov?  They give the Oscar to Ives' role in The Big Country but didn't nominate him for Big Daddy in Cat on a Hot Tin Roof?  Under the 'comedy is harder than drama', I'm picking Young.  That's it. 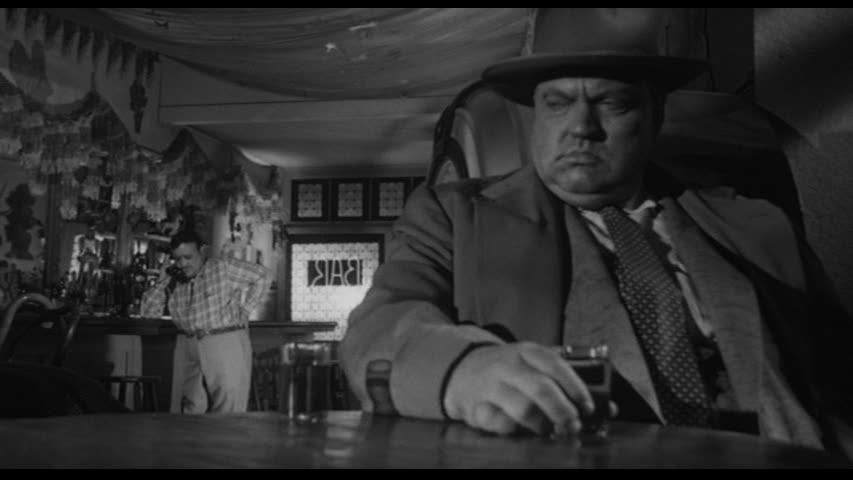 A case where two actors from the same film cancel each other out.  Pity, because Jack Carson, one of my favorite actors (up there with Claude Rains) really was so underappreciated.  Usually the happy-go-lucky guy, he could be dark or angry beneath his suave, breezy charm (like in Mildred Pierce or Cat on a Hot Tin Roof).  Chevalier again has an iconic role, but my heart goes to Welles' corrupt but ultimately tragic Captain Quinlan, who destroyed himself.  In reality, Welles wasn't as fat as he looked in Touch of Evil (though he would eventually grow that size).  As sleazy as Quinlan was, part of you felt terribly sorry for him, knowing that the crime he witnessed slowly ate at him until the line between shady but honest cop and downright criminal was lost.

I know of people who dislike Russell's performance in Auntie Mame for being extremely broad.  What they are not taking into account is that Mame herself was suppose to be extremely broad.  She was a wild, madcap dame and made no apologies for it.  I like all the performances and don't see anything really wrong if any of them had won (and that goes especially for Hayward's innocent murderess in I Want to Live!).  However, out of all of these I think only two have become iconic: Taylor's sex-starved wife, and Russell's deranged doyenne.  In this case, I'm going with the eccentric.

I don't think Kim Novak is considered one of the great actresses of our time, but I give her full credit for her performance in Vertigo.  I don't want to spoil the twist that comes midway through the film, but let's just say that the first time I saw it, she had me fooled.  Novak has to carry a lot in the film, and given how well she did it, I think we saw she gave a truly remarkable performance. I like David Niven.  He is the model of the very British gentleman, but I think he was given the Oscar for playing against type.  If memory serves correct, he plays a sexual deviant of some kind.  YET it's only 15 minutes long altogether, and one wonders why not put him in Supporting rather than Lead.  Here again, we see two costars cancel each other out, and that leaves just two.  Newman as the drunk, probably homo/bisexual Brick who'd rather drink himself to death than sleep with Elizabeth Taylor is one of those performances you remember long after the movie ends.

I again find it amazing that James Stewart received only one Oscar his whole career, and to be honest, I suspect that his win for The Philadelphia Story was a consolation Oscar for having lost the previous year in Mr. Smith Goes to Washington to Robert Donat in Goodbye, Mr. Chips.  It isn't that astonishing to see why Stewart wasn't nominated for perhaps one of his greatest performances.  Vertigo was not seen as a great film when released.  The story was seen as a bit bizarre and let's face it: it IS, given the suggestion of necrophilia and obsession.  However, you see Stewart's performance as a man completely broken down by his obsession and you think, THIS is acting. Well, I don't 'actively dislike' any of these films (to quote my bete noire over at The Nerdist), but Gigi has to be perhaps the weakest of the nominees and one of the worst winners.  It isn't because it's a terrible film in and of itself.  It's just that it's so light and if not strictly forgettable at least not as well remembered as any of the others.  It has pretty sets, pretty costumes, great songs, and pretty people, but I find it hard to believe that, even in its watered down version, Gigi of all things is better than Cat on a Hot Tin Roof. 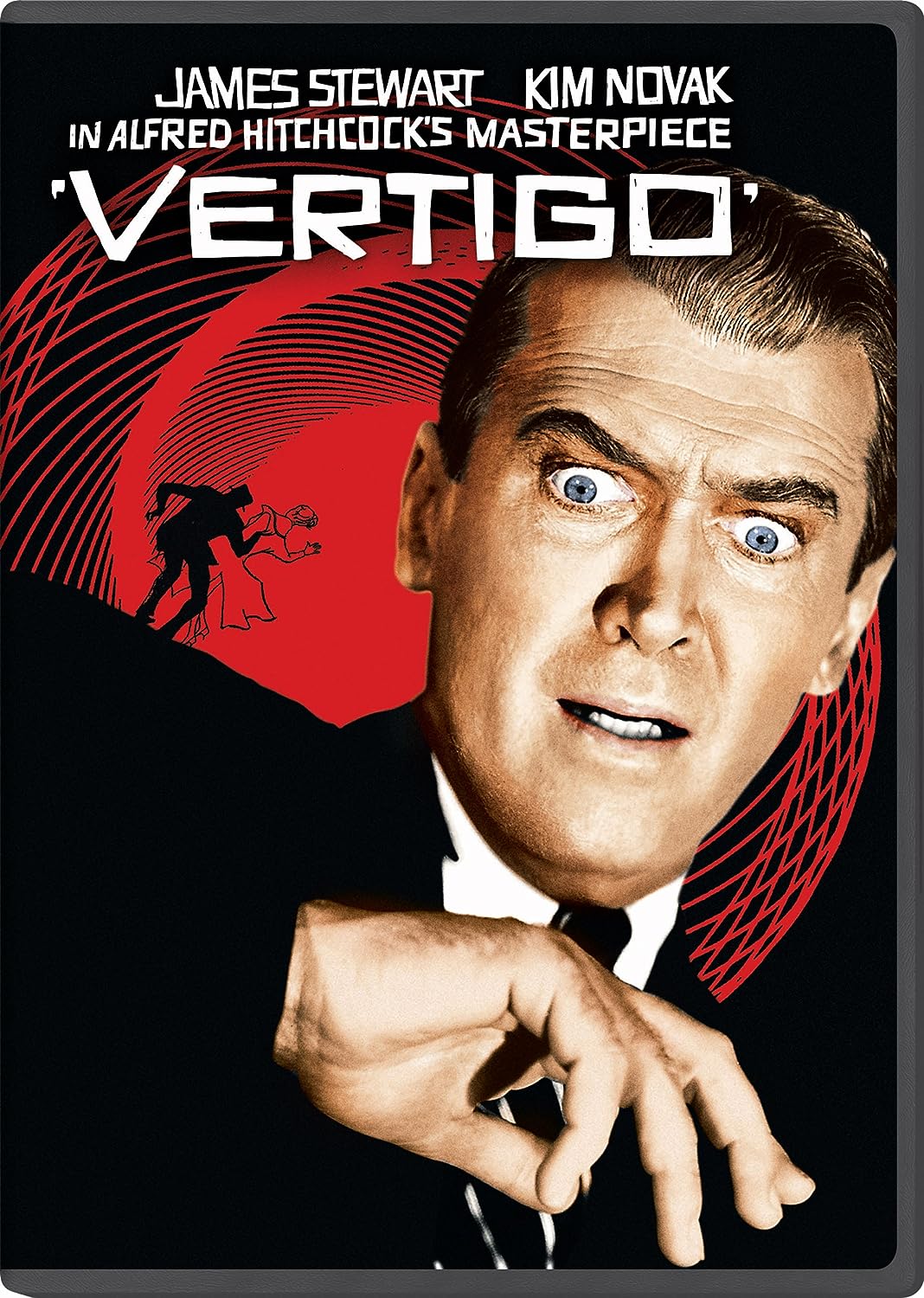 Yeah, like I'm going to believe the lightweight Gigi is better than either Touch of Evil or my choice for the Best Film of 1958, Vertigo.   The darkness, the despair, the insanity, the obsession...all that lies beneath in this twisted love story.  Beats out the romp of Louis Jourdan and Leslie Caron, and certainly the Gallic laughs of Maurice Chevalier.