It's been a while since I've been to the dark world of Gotham, but fortunately the first half of the second season has ended and won't be back until next month;  this gives me enough time to catch up and review the five remaining episodes before Gotham returns.

Part of my avoidance of Mommy's Little Monster came from the fact that I knew instinctively that Gertrude Kapelput (Carol Kane), mother to Oswald Cobblepot aka The Penguin (Robin Lord Taylor) was going to be killed off.  Part of me has an instant dislike in seeing innocents killed on television or in film.  Part of it also is the fact that I genuinely liked Gertrude as a character and seeing her axed so tore at me.  Mommy's Little Monster did right by her and was realistic in the circumstances that led to this and to future events.  It also is tying in the stories of both Penguin and Edward Nygma (Cory Michael Smith), the future Riddler, which are going to have to be built before Bruce Wayne (David Mazouz) becomes Batman.  The first half of Gotham is tying itself together in a solid manner, giving us a lot to work with as the series continues to grow.

As expected, Butch Gilzean (Drew Powell) leads Penguin to Gertrude, but to Penguin's shock Gilzean is no longer under his control.  Theo Galavan (James Frain) and his bitch of a sister Tabitha (Jessica Lucas) 86 the old lady.  This has the desired effect of enraging Penguin, but no worries: they plan to kill him too.  Unfortunately, Penguin cuts Theo with the knife they used to kill his Mommy, causing enough of a distraction for him to escape.

This as far as they are concerned is a mere inconvenience while Galavan continues his election to Mayor.  He has support from both Detective Jim Gordon (Ben McKenzie) and ADA Harvey Dent (Nicholas D'Agosto), who is eager to get Gotham's version of The Donald to power (business tycoon running for elected office).  To capture Penguin, the newly-elected Mayor proposes martial law, which troubles the upright Gordon.  He and his partner, Harvey Bullock (Donal Logue) don't think Penguin would be this irrational, and their investigation starts revealing that Penguin had been coerced into his acts. 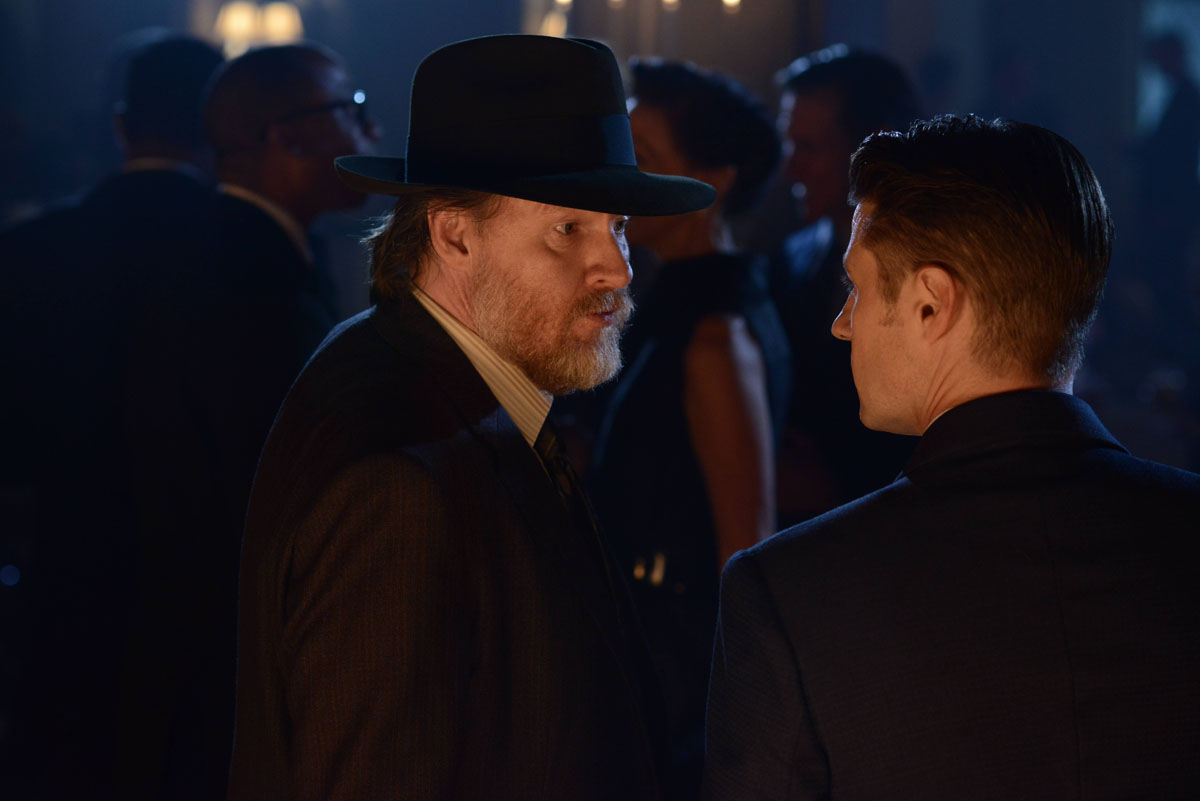 What neither Gordon or Galavan are counting on is that Penguin still has a few cards to play.  The first is his still-loyal master assassin Victor Zsasz (Anthony Carrigan), who is now after Butch for his part in this.  Another is his own brilliance in crime (Galavan continues to fail to see Penguin is no amateur).  Third is Gordon's rectitude, for once Gordon puts it all together he'd rather side with Penguin than Galavan, whom he now considers a bigger danger & monster.  At the victory party, Penguin unleashes a real March of the Penguins: a whole group of low-level criminals impersonating him (down to the waddle), confusing Tabitha as to which one is the one.  Galavan does manage to escape Penguin, and Gordon tells him that he knows Galavan killed Penguin's mother in front of his eyes.  Tabitha wings Penguin (probably because he was too close to Galavan to ensure a clean shot), and he escapes.  Now it's on between Gordon and Galavan.

In the two subplots, Selina Kyle (Camren Bicondova) faces off against Silver St. Cloud (Natalie Alyn Lind), the WASP Galavan niece and new squeeze of Bruce Wayne.  Selina sees through Silver's airs of kindness which Bruce doesn't.  Edward Nygma (Cory Michael Smith) has trouble of his own.  Having murdered his girlfriend Kristen Kringle, his dual personality has gone off the deep end.  He leaves clues in forms of riddles for the rational side of Nygma to find her body (including her hand in a vending machine), and with her finally gone, Nygma's more dangerous side merges with his rational, moral side to make an unholy whole.

﻿
Now, there are some parts of Mommy's Little Monster that were unintentionally laughable and or almost illogical.  In the former, there was this line:  "You hijacked my body while I was asleep and stole my dead girlfriend".   Thus said Rational Ed to Irrational Ed, and while in the context of the story it made sense, it does sound hilarious.  I have to give credit to CMS for saying that line without laughing.

In the latter, there is both Tabitha and Victor's literal hit-and-miss with her weapon.  Twice she fails to kill Penguin despite being a expert markswoman.  Penguin, not the fasted of birds, waddled enough to throw her off her game, and as I said perhaps when she had him again, the proximity to her brother prevented her from doing nothing other than hitting him in the shoulder.  And yes, I'm aware you couldn't literally kill Penguin off when RLT is perhaps the best thing on Gotham, but I found it rather bizarre she'd miss TWICE!  Same goes for Zsasz, who despite the barrage he unleashed on Gilzean's place really failed to get anyone and didn't seem too disturbed to leave once he heard the GCPD were there.

Those were the oddball moments, which knocked Mommy's Little Monster down a bit.  However, given how good the overall episode was, I think highly of it.  The show managed to keep a pretty good balance between three stories (though the Galavan/Penguin war was the primary one).  Neither the secondary plot (Nygma's descent into lunacy) or the third one (the bizarre love triangle of Kyle, Wayne, and St. Cloud) felt out of place.

In terms of the latter, we got to see three really good young actors play each part perfectly.  Bicondova does her best work as the angry yet realistic Selina, throwing off a few barbs at the WASP Silver "How long have you been a two-faced bitch?" and at Sean Pertwee's Alfred.  The Wayne manservant is displeased to see her crashing Wayne Manor, but he can't go around saying he slapped her before.  As he leaves them with their sandwiches, Selina deadpans, "That smell really does slap you in the face, doesn't it, Alfred?"

I also have to give CMS props for playing the dual roles so effectively you do believe him to be two different people.  The bumbling, decent Ed has nothing in common with the more menacing and confident Ed, and CMS simply excels in making them distinct (the Dutch angles to distinguish Killer Ed help).

While her scene is small, Kane gives a heartbreaking performance as the much-missed Gertrude, the real love of Penguin's life.  Her final scene shows that through it all, despite everything he did (and what she must know of him and his life choices), she will always love him and be her little boy.  It just about breaks your heart to see how she was not blind to Oswald's sins but in the end, he was her son, her precious little boy for whom she'd do anything for, even die a violent and cruel death.

Another standout acting-wise is Lucas, whose performance is so good it made me thoroughly hate Tabitha.  While Frain is delighting in his cool evil, we see Tabitha as completely evil, with no redeeming qualities.  The fact that I think so highly of the bitch makes me see what a great job she's doing.  On the minus side, I feel for D'Agosto, who I hope gets more to do (though it's nice to see him back in some capacity).

There is another aspect of Mommy's Little Monster thought that did disturb me, and that's the violence.  Whether it was meant as a pun, seeing Kringle's hand inside a vending machine that sells Ladyfingers was a bit gruesome, as was Tabitha stabbing Officer Sal Martinez (Lucas Salvagno) with her stiletto. The blood and overall barbarism of it all I thought was a bit too much, especially for a show that probably has many kids watching.  That amount of graphic violence did bother me, and while I know it's not Gotham's place to monitor what the children are watching, I do wish they'd rein themselves in from time to time and be more suggestive rather than graphic.

Still, Mommy's Little Monster proved to be yet another strong episode to Gotham's sharper and more focused Second Season.  It looks like we're in for a fiery conclusion to the Penguin/Galavan war.  The Mother of All Battles is about to go down.

Next Episode: Tonight's The Night
Posted by Rick at 6:45 AM