The Librarians: And the Happily Ever Afters Review 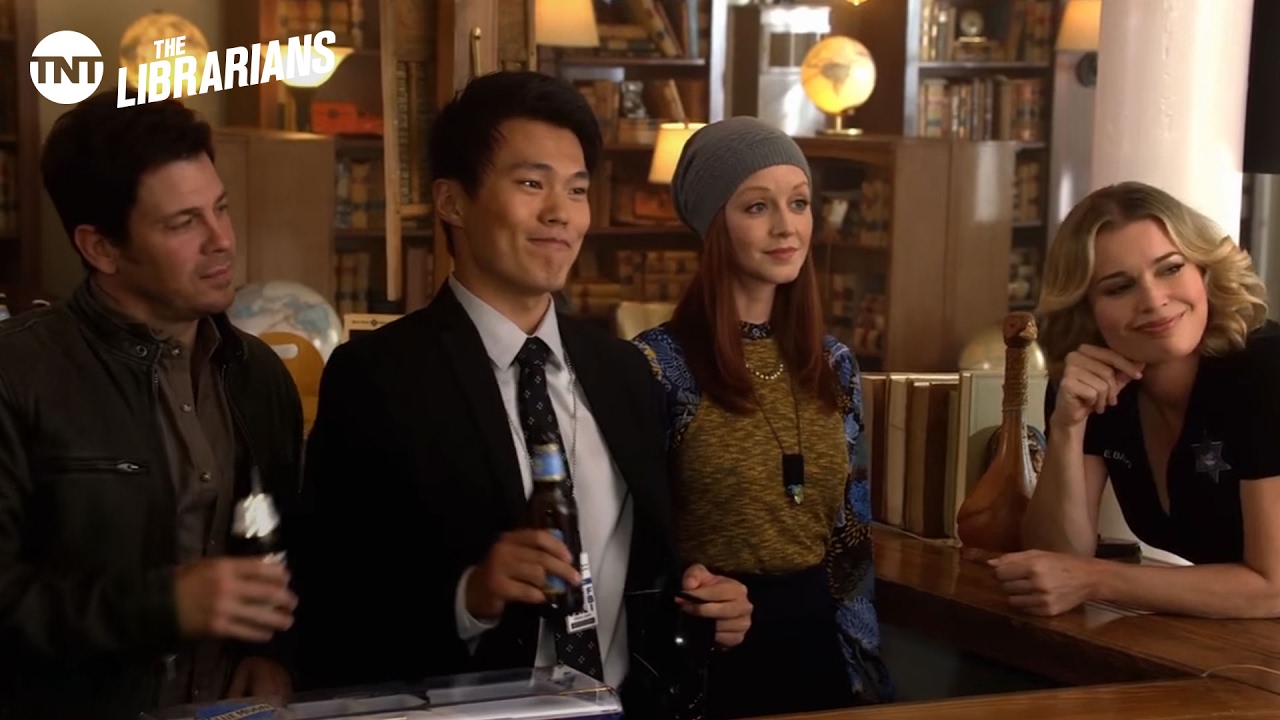 THE LIBRARIANS: AND THE
HAPPILY EVER AFTERS

We all have our ideas of our ideal lives, what we would do and be if only we could get our dreams granted.  And the Happily Ever Afters gives us a glimpse into what our various Librarians characters would be if they could be anything they could.  Oddly enough, it isn't all that different from the lives they lead now.  We also get the return of Flynn Carsen (Noah Wyle), the Main Librarian who may or may not play a larger role in the Third Season (of which I'm very happy to hear about).

Flynn is back, but he finds the Library Annex strangely abandoned.  The Annex's caretaker, Jenkins (John Larroquette) is pleased to find Mr. Carsen back, but has no idea who any of the other people Flynn's talking about are.  It's as if they never were there to begin with, which would have been Jenkins' ideal.  As Flynn is putting things together, he gets a new assignment: a totem pole has been stolen from the town of Cicely, Washington (not to be confused with Northern Exposure's Cicely, Alaska, which would have been a nice joke).  He is mistaken for someone from the mainland (as Cicely is on an island) to help investigate, and he meets the local Sheriff, Eve Baird (Rebecca Romijn).  She has no idea who he is, but he does.

Flynn is further befuddled when he and Sheriff Baird meet the foremost expert on Native American art, Professor Jacob Stone (Christian Kane), who teaches an astonishing 14 courses at the University in a town with a population of less than 5,000 people.  Stone and Baird also rely on former NASA Commander (and TV star) Cassandra Cillian (Lindy Booth) and Special FBI Agent Ezekiel Jones (John Kim).  Flynn is more confused, especially when he sees that they own a bar together that has a lot of books.  He does his best to convince them that none of this is real (especially the idea that 'Special Agent Jones' is in his words, "15 years old...and AUSTRALIAN") but to no avail.  Flynn is then more horrified to find that Moriarty (David S. Lee) is the Mayor...and dating Eve!

Flynn gets to see them live out their ideal lives, and then things take more rational turns.  Eve and Moriarty discover no boats have entered Cicely in days, so how did Flynn get here?  They suspect HE stole the totem pole, and that he might be in cahoots with another new visitor.  That visitor is revealed to be Ariel (Hayley McLaughlin), who reveals that everyone save Flynn is under a spell from Prospero.  The spell's strength comes from their secret desires: the longer it works the more they want it, the more they want it the stronger it gets.  Now, Flynn has to work to get them to break the spell before it takes permanent form, which is not going to be easy on two levels.

On one, the others won't give up their ideal lives without struggle.  On the other, Ariel is very difficult to manage.  Flynn manages to lure them to the Annex with Ariel's reluctant help, and he slowly talks them into realizing who they really are and that they do belong in the Library.  To help Eve break her spell, it takes True Love's Kiss (one guess as to where she gets it).  Eventually, they see he's right, and they work together to recover the totem, which means removing the talisman they each have unwittingly worn that keeps them under Prospero's control.  Prospero (Richard Cox) tries to lure them back to their fantasy worlds, but he cannot.  However, at the end we find that Flynn has been living his ideal life too, and it takes Eve's kiss to release him of it.  We also discover that Prospero has released the ley lines around the world, which is giving him more power by the second to take over the world.

And the Happily Ever Afters plays with the character's conventions while still being true to them, and it has a lot of fun with everyone.  It's a showcase for Wyle, who understandably has not been a major part of The Librarians (though how he's written in and out of the series has become if not tiresome a bit more farfetched).  When he and Jones are living out the latter's ideal world by chasing bad guys, Jones shouts, "Stop!  FBI!"  The bumbling Flynn can only shout, "Stop!  Office of Tourism!" as a follow-up, which is true to his character but equally funny.  We learn that in Stone's ideal world, he can have a bevvy of beauties follow him as his students and that he I think single-handedly stopped the Taliban from blowing up the Buddhas, which is also true to his character of being tough but passionate about ancient art. 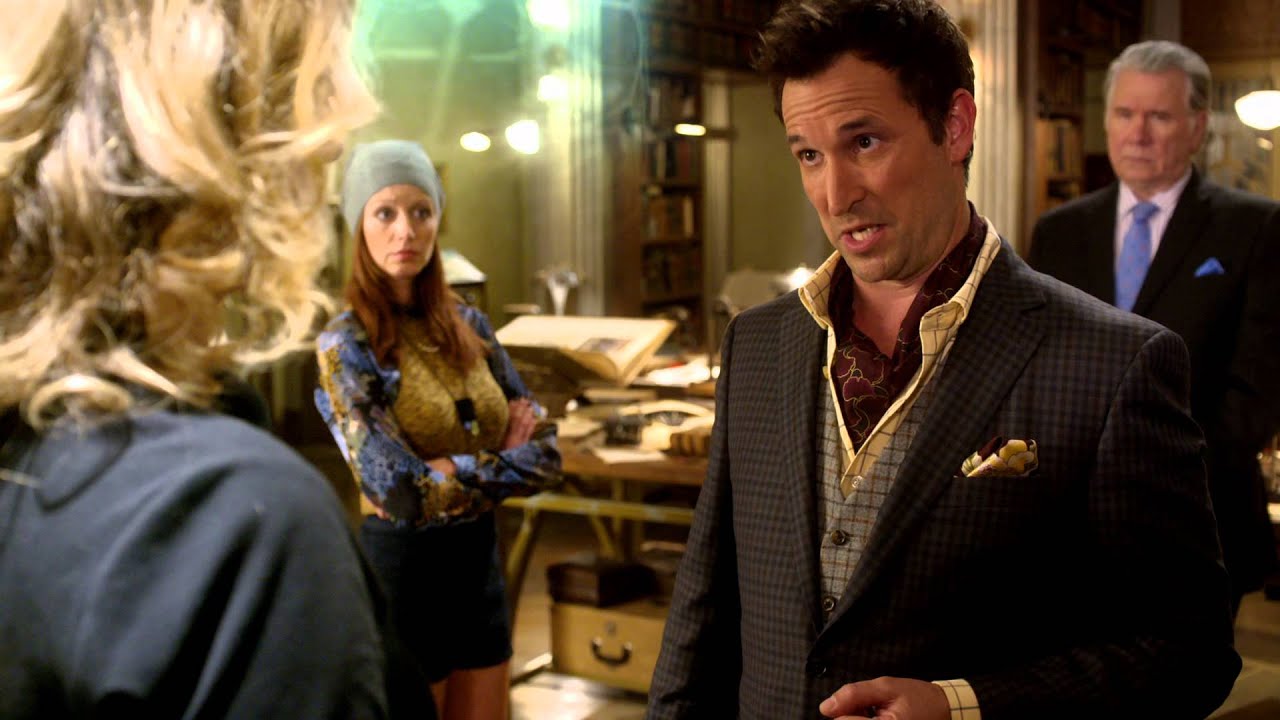 Each of the actors used what we know of their characters to make the scenario real, and it was nice to see them play up their individual characters' personas to great effect (who knew Cassandra's ideal life involved her becoming both an astronaut AND a children's TV host).  It's also amusing to see Jones, who excels at being a criminal, have his ideal life be as a action star but for the right side of the law.

As I stated, Wyle was on top form as Flynn Carsen, who keeps his bumbling, befuddled persona while also being extremely savvy about how to solve his particular dilemma.  He has a wonderful way with comedy (as when he inadvertently refers to Mayor James Moriarty as "Mayor Kissing", having been taken aback at Moriarty and Eve's romance).  We also do see some really good work from Lee as Moriarty, who is more aware of what is going on but who also plays the love affair he has with the Sheriff so well.  Romijn is wonderful as the peace-loving Sheriff living in a tranquil world where she knows everyone and everyone knows her.  Guest star McLaughlin has a droll manner to her Ariel.  When Flynn is explaining to the others who she is when he traps them in the Annex, Ariel replies that she's still very unhappy to still be here.

If I were to fault And the Happily Ever Afters it is with the fact that we get this last-minute twist of Flynn being in his ideal world (one where he always ends up solving a difficult problem).  I also think Prospero himself doesn't play as large a role as the story could have given him.   These are minor complaints on the whole, however.

It was nice to see that for all intents and purposes, each of The Librarians characters essentially stayed the same even in different worlds.  It's also nice to see them work together in an ideal world.  One wonders just how much fan-fiction one could spin out of the world of Cicely, Washington.

Next Episode: And the Final Curtain