Gotham: Worse Than A Crime Review

GOTHAM: WORSE THAN A CRIME

Well, Worse Than A Crime, the mid-season finale to Season Two of Gotham, gives us that patented Gotham-crazy, or should I say, Batman-CRAZY.  We got quasi-Satanic cults complete with ritual human sacrifices, the uniting of disparate people, some brutal (though fitting) revenge, and the rise of a new villain (anyone who doesn't think it's who it is I'd say is really, really dumb).

Bruce Wayne (David Mazouz) has been taken by disgraced Mayor Theo Galavan (James Frain) and is being held prisoner before Bruce's throat is slashed by the Order of St. Dumas, enacting its final revenge on the Wayne Family for misdeeds done centuries ago (talk about holding a grudge).  As is the case, these human sacrifices must take place at midnight, so Brucie has a few hours to kill before being killed.  Enter Silver St. Cloud (Natalie Alyn Lind), sent over by Uncle Theo to show her mettle against the last of the Waynes.  Theo, so consumed with hatred that he has become totally blind to anything else, won't stand for even Tabitha (Jessica Lucas), his sister telling him to essentially lay off their niece.

Not that Tabitha doesn't have her own concerns.  She fails to find Alfred (Sean Pertwee) who had been stabbed by her but who managed to successfully hide out in a junkyard and escape to seek help from Gotham's not-so-finest, in this case Detective Harvey Bullock (Donal Logue).  Also surprised is Lucius Fox (Chris Chalk), who had been the first to report Bruce missing.  In a bizarre turn of events, Fox had been inside the future Batcave when Wayne was abducted, and when he emerged, he was surprised to find no one there.  As Bruce's connection to Galavan hasn't been proved, Captain Barnes (Michael Chiklis) cannot do anything.   However, as the posse begins to form, one Edward Nygma (Cory Michael Smith), cannot help reveal what he knows. 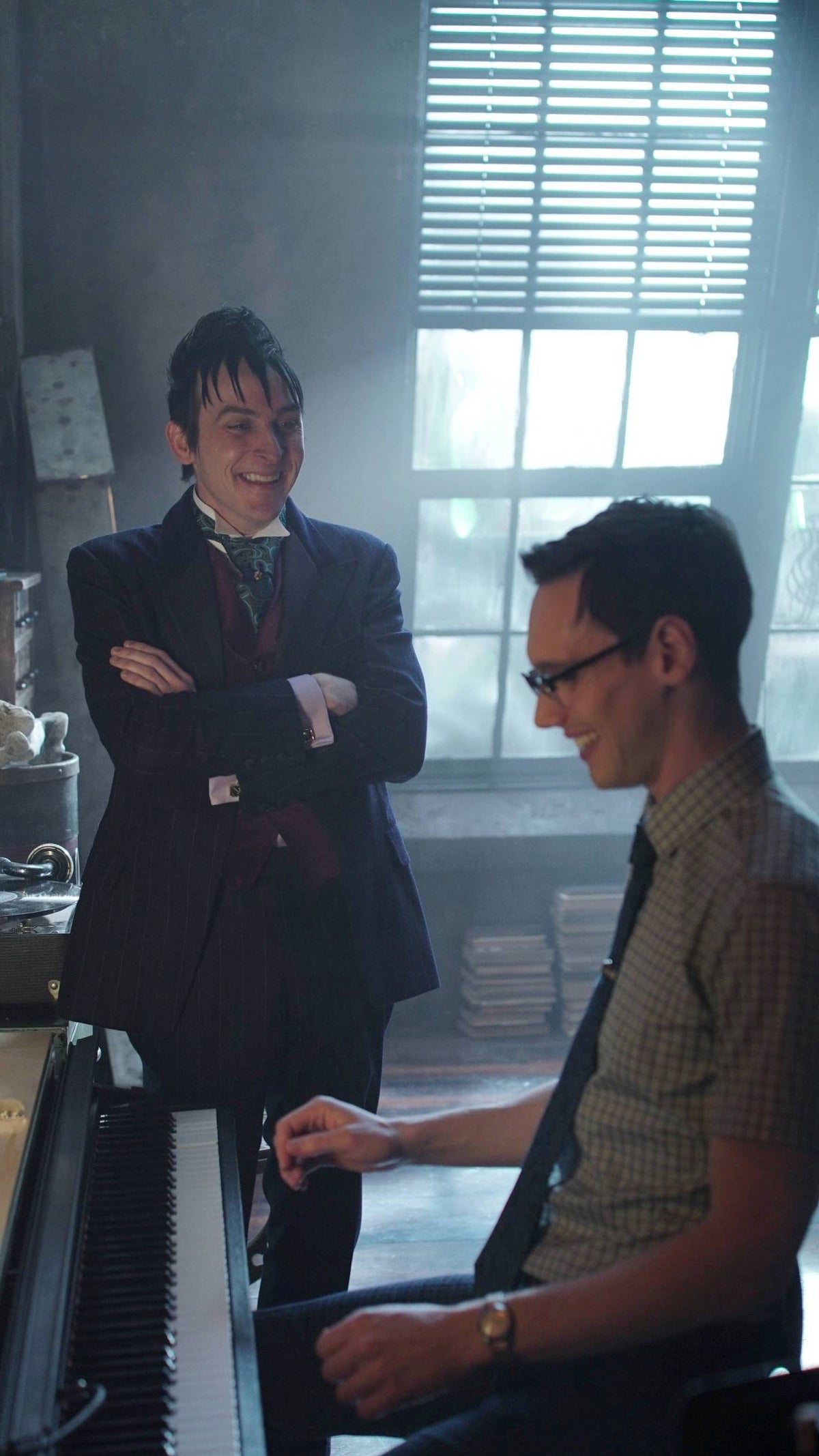 Gordon has been taken to Nygma's, where he is stunned to find Edward all buddy-buddy with Oswald Cobblepot aka The Penguin (Robin Lord Taylor).   This unholy alliance isn't the only thing that throws Gordon for a loop.  Penguin has brought Dr. Leslie 'Lee' Thompkins (Morena Baccarin) to Gordon, where she has news of her own: she's pregnant.  Talk about unexpected news.

Despite his best intentions, Lee knows Gordon will never change, especially after Bullock, Fox, and Alfred go to him to tell him of Bruce's abduction.  They all join forces to rescue Bruce from the Satanic Rites of Galavan.  There you have it: Pennyworth, Bullock, Gordon, and Fox joining forces with Penguin (and to a degree, Nygma) for a common goal: to take down Theo Galavan once and for all.  Still, while they might know where, they can't figure out a way to get in.  At least, until we get a new member to join this Superheroes/Super-Villains Alliance: Selina Kyle (Camren Bicondova).  She knows a way in, but they must hurry, because midnight is approaching.

Silver, who 'attempted' to help Bruce escape, doesn't fool Bruce.  He knew he wouldn't get out and that she was playing him all along.  It's at this point that Silver does drop her façade slightly, to reveal that if she doesn't get Bruce to kiss her and say he loves her before he is taken away, she will be thrown out into the street. As Galavan comes to collect Bruce for their Satanic rites, Bruce goes and in a great performance, tells her what Galavan wants to hear, ensuring her survival after he's killed.

As the knife is about to be brought down, Silver steps in, demanding that this all end.  All the monks, Galavan, Bruce, and Tabitha are all taken by surprise at Silver's last-minute interference, but it's just enough time for the good/not-so-good guys to show up.  Mass confusion and chaos erupts: Tabitha grabs Silver and they flee, the monks are brought down in a hail of bullets or flee, and Galavan too takes flight.  Bruce is rescued, but there are still old scores to settle.

Galavan is prepared for every eventuality, having placed two parachutes for him and Tabitha to make their getaway.  As far as he's concerned, Silver's actions are treasonous and worthy of death.  At last, Tabitha has had enough of her brother and does what no one expected: knocks him out when he wasn't looking.  She grabs the parachutes and slips one onto a stunned Silver, pushing her out the window before she realizes what's going on, her screams plunging into the night.  Gordon arrests Galavan, and Barnes comes and attempts to arrest BOTH of them.  Enter Penguin, who knocks Barnes out.  Penguin is not just determined to get his revenge for his mother, but pleads with Gordon to listen to reason.  Galavan will escape again, Penguin insists, and for the good of everyone, Galavan must die.  It's to the docks for the three of them, Galavan in the trunk.  Gordon allows Penguin to take a bat and beat Galavan viciously, telling him, "This is for my mother".  For once, Galavan is weak and helpless, unable to do anything to stop his own sins from being visited upon him.  Gordon tells Penguin to stop, and in a dramatic turn, coldly shoots Theo Galavan dead.

Galavan's body is taken to Indian Hill, where a "Professor Strange" might find uses for his body, appropriately stuffed with an umbrella in his mouth.  Gordon proposes to Dr. Thompkins, and we end with a new figure, one who can freeze people to death.

Worse Than A Crime packs a lot within its hour, and I'd say that it ended the first half in a thrilling fashion with perhaps one or two minor missteps.  The first misstep I think would be Silver's attempted 'rescue'.  I never believed that she was going to actually do anything to help Bruce.  I figured this was part of a larger plan.  The second was Silver's last-minute plea for Bruce.  I know she had melted a touch due to Bruce's kindness, but somehow my mind thought it would have been better for the Super-Alliance to break in before the literal stroke of midnight.  It all seemed a bit too much to believe.

Still, when I do think on it, I am amazed at how well the episode holds up.  All the weaving of the characters works within Gotham's own logic and I think so many Gotham fans wanted them to join forces.  Certainly putting this group with their various motives could be daunting, but the episode managed to it excellently. 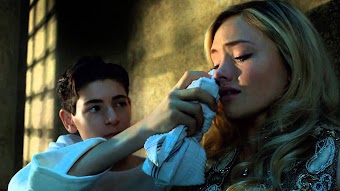 Worse Than A Crime was really about Gordon and Wayne: one who has now given into the darkness, the other a somewhat helpless witness to the darkness in Gotham.  Both McKenzie and Mazouz need singling out for their really strong performances.  McKenzie, over the course of this season, has given Gordon a more complex, contradictory persona than the square-jawed rectitude of Season One, all moralizing and slightly aloof.  Now, we see that Gordon's basic goodness can be muddied by the dark waters of Gotham.  Mazouz displayed throughout the episode a maturity to Bruce, one who faces death without fear.  However, we also see that he is still at heart a good, decent, even gentle boy, who does not want to bring misery to others.  The fact that he gave Galavan, the man about to kill him, satisfaction and thus assured Silver's life shows Bruce Wayne to be a noble figure, even as he faces the end.

Worse Than A Crime even manages to sneak in a few moments of comedy (seeing poor Alfred tasered when trying desperately to get back to Gotham after all he's been through, like being buried in trash, is funny).  It allows a touch of humor to enter the rather dark proceedings.  Seeing Penguin and Riddler in a sing-along is also quite amusing, even tender. Their BFF bromance is in turns bizarre and endearing.

However, the news of Lee's pregnancy certainly is playing with ideas about the future Batgirl.  Whether the pregnancy was written to accommodate Baccarin's real-life pregnancy (a result of her off-screen relationship with McKenzie) or whether it was planned before Baccarin became pregnant I don't know.  However, the entire storyline is going to be a fascinating one to explore when Gotham returns.

Frain has a market on playing evil, and here he let the whole really demonic Galavan figure out.  His taunting of Gordon was too much for even the moral Gordon to tolerate, and he was so good in the role that we feel no sympathy for Galavan when Penguin enacts his vicious (and I'd say thoroughly justified) revenge.  The umbrella was a particularly vicious end but altogether fitting for the monster he was.  Penguin is an unapologetic master criminal, but he'd never kill your mother in front of you.

Apart from the slightly predictable role Silver played in all this craziness, Worse Than A Crime was as excellent an end to the Galavan storyline as could be created.  It keeps a balance between Gordon and Wayne, as it should be in a Batman prequel that is about Jim Gordon.  We get potential future stories around Galavan and maybe even Fish Mooney (who appears to be cryogenically frozen at Indian Hill).  We will be getting the rise of Mr. Freeze, but how will the Odd Couple of Penguin and Riddler go on?

I can't wait to find out come February.