The Librarians: And the Final Curtain Review

THE LIBRARIANS: AND THE FINAL CURTAIN

Longtime readers know I have a passion for Shakespeare.  I don't consider myself an intellectual but I have never had a difficult time understanding his plays.  Yes, the language is rather arcane, but the power of his words still moves us.  And the Final Curtain, the season finale of The Librarians, brings two great loves in a wonderful episode that puts everything that works in this series together: the humor, the heart, the unapologetic fun, and lots of magic (with a little bit of logic thrown in).

Prospero (Richard Cox) is recreating his own world where he rules, one where the earth is reforested and technology is supplanted by magic.  In order to stop Prospero, the Librarians have to return to when he was originally created, which requires time travel.  Time travel is strictly prohibited and all time machines in the Library's Time Machine Room are disabled (something about temporal loops always doing the time travelers in).  Among the various time machines are a DeLorean and a blue box...

The only ones travelling to 1611 England are the Librarian Flynn Carsen (Noah Wyle) and his Guardian/girlfriend, Eve Baird (Rebecca Romijn).  As it stands, their use of a miniature time-travelling device means that they can't come back.  Thus they arrive in Merry Olde England, where Eve's height and their strange clothes instantly define them as strangers.  However, there is hope for them, in the form of their frenemy, Moriarty (David S. Lee), who sweeps in to rescue them and tells them, "Come with me if you want to live", which only worries Eve if Moriarty might end up being a Terminator.

The other Librarians: Cassandra (Lindy Booth), Stone (Christian Kane) and Jones (John Kim) along with Annex Caretaker Jenkins (John Larroquette), now aware of the danger, go to Wilton Hall in England, where The Tempest premiered.  There, using their skills, they search for clues Eve and Flynn may have left to help them perform an exorcism that will expel Prospero.  Time, however, is running short for them as Flynn and Eve, in the past, are seeing William Shakespeare (David Urey), hard at work on his newest play, called The Triumph of Prospero. 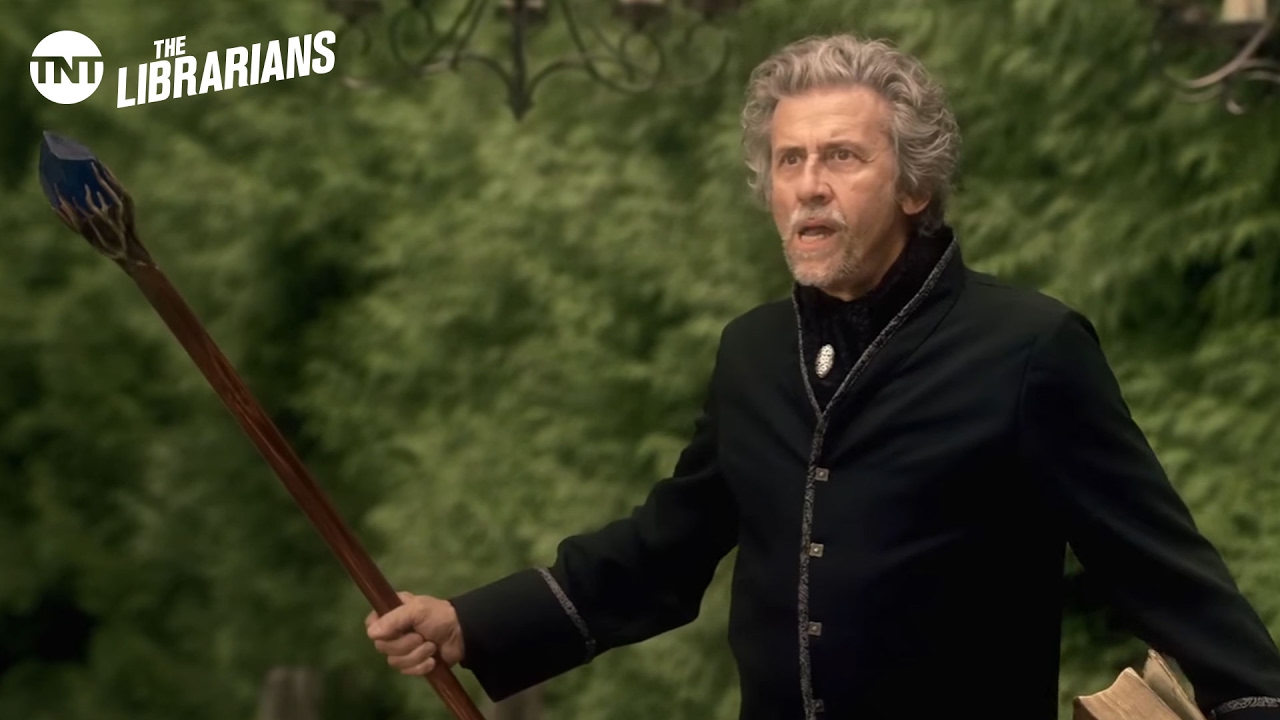 Shakespeare's genius is amplified by a magic pen that comes from a branch of the Tree of Knowledge, which allows him to unwittingly create his masterpieces.   As Shakespeare begins to use Prospero as an avatar to his own frustrations of being slowly pushed into retirement, the wizard takes over Shakespeare and begins unleashing his wrath.  There is one plus: Prospero can only use Shakespeare's works (such as turning people into stone or people with donkey heads).  Eve and Flynn now work furiously to both leave clues and stop Prospero in their time.

Unexpected help again comes from Moriarty, whose plan was much simpler: just kill Shakespeare.  Moriarty is disintegrated by Prospero, but the delay helps in Eve's attempt to drown Prospero's books.  So enraged is Prospero that he uses his staff to push Eve into the waters, with Flynn desperate to stop all this.  However, Eve finds herself meeting the Lady of the Lake, who gives her a gift: Excalibur.  King Arthur's sword is the only weapon strong enough to break Prospero's staff, but only one who has wielded it before can do so.  Guess who has?  Flynn is reunited with his friend Cal, and the staff is broken and Prospero exorcised.

The exorcism brings Shakespeare to the modern world, causing a time rift.  Shakespeare can return to the past, but Eve and Flynn cannot cross to the present.  It looks like Eve and Flynn are lost in time, and the groups have their farewells.  Later, Jenkins asks Stone how the others are.  "Jones is pretending he's fine, Cassandra ain't pretending at all," the equally devastated Stone says, who has buried his grief in organizing the Library.  Stone mentions that he's trying to get into a locked room, but that he can't find the key.  Jenkins tells him he and Mr. Carsen have never had the key, but Cassandra rushes in to say that a mysterious message appears above the door, saying Jenkins has the key.  They all go and Jenkins does indeed have the key: the words "Eve Baird".  There, they find a statue of Eve and Flynn in a kiss, and with Cassandra's voice as the spell-breaker, the statue reveals them fully alive in the present.  They used Shakespeare's magic pen one last time, to tell the story of a dashing Librarian and his beautiful Guardian, trapped in stone, to be released by Cassandra's voice.

And the Final Curtain does something that Doctor Who has lost the ability to do: make time travel logical.  I was especially impressed with how Flynn and Eve, despite being four hundred years in the past, managed to return to the present by using the tools at their disposal.  This is especially clever since the easy route (just walking through the portal) was not used.  Furthermore, we as the audience were not given a way to have them return, giving us some moments of true emotional weight.

What we think of as the farewell of Eve & Flynn with Jenkins and the other Librarians is particularly emotional.  Each of the Librarians kept to their personalities, but added a touch of true emotion within their personalities.  There really wasn't a bad performance by any of the regular cast, always a plus.

And the Final Curtain also gave us a great deal of the standard Librarians humor, with most of the credit going to Lee.  Every time he is on screen, his mix of charm and menace made for great viewing.  When Prospero summons him to the gardens, Moriarty is displeased.  "I'm more of a city villain than a country bumpkin", he comments.  His use of The Terminator tagline and how he convinces Eve that his plan is better than Flynn's seemingly elaborate one ("I have a far more convincing plan...and a much more convincing British accent") all work to make Moriarty a wonderful character.  While he is evaporated, Moriarty is given a noble end...and is not completely dead since being stabbed by Prospero's staff is not how his story ends.

Dare we hope Moriarty may return?  At least his return would be a far more logical one than any Sherlock can come up with.

Wyle is a delight throughout as Flynn, a character which he has excelled throughout the decades he's portrayed him.  He's fanboy enthusiasm for Shakespeare, coupled with his exaggerated acting to join his troupe, gives And the Final Curtain more humor.  Shakespeare, watching Flynn's 'robust' audition, compliments him on his fencing, but sadly informs him that "it's too obvious English is your second language".   Romijn gets her own in this scene too, when Shakespeare tells her that she (disguised as a man) would have made a good Portia, since it's so hard to find good male actors to impersonate women.  "Why not just hire women actors?", she comments, making both Shakespeare and Flynn laugh (the former because women didn't take to the stage, the latter to keep up appearances).

The other performances are all so equal to the task.  Kim, Booth, and Kane each quotes Shakespeare so well, their words mirroring their character's own lives.  Larroquette has a brief but moving moment when he reflects on the prophesy of Excalibur, wishing that the idea of his long-gone friend Arthur returning might be true but realizing it will not come to pass.  It's not a big moment, and it might not lend anything to the overall story, but it is filled with a sadness and longing we don't see from Jenkins, who is usually so stuffy and buttoned-up.

Really, the three best things about And the Final Curtain are the humor in the story, the performances of the whole cast and the actual logic behind everything (or as much logic as one can find with magic being real).  It is wonderful to see Excalibur brought back, especially for those longtime Librarian fans who have grown fond of "Cal" and which we remember 'died' last season.  It's good to see Cal back at the Library.

As a side note, I do note that the Ladies of the Lake (even their guests like Cassandra and Eve) always look so glamorous underwater.  Use that any way you wish.

And the Final Curtain does an excellent job in ending this season's story arc (Prospero has been vanquished) without painting itself into a total corner (Moriarty may return, and it be great if he did).  We got logic and humor in a fantasy show, with strong performances by everyone (especially David S. Lee as Moriarty).

It looks like The Librarians is in safe hands, especially with Cal back.

Next: And the Complete Second Season
Posted by Rick at 6:35 AM