Confessions of a Nazi Spy: A Review 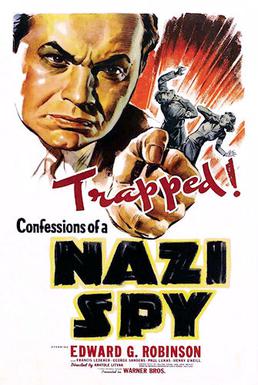 CONFESSIONS OF A NAZI SPY

Warner Brothers, for all its reputation as a studio that specialized in gritty urban crime stories, was fearless when it came to confronting the impending evil of Nazism. Confessions of a Nazi Spy is nowhere near subtle, but it is an interesting time capsule of a time and place where the growing menace was still, theoretically, far off.

Respected physician Dr. Kassell (Paul Lukas) is overt about his love for the Third Reich. As both a naturalized American citizen and head of a local German-American Bund, he routinely spouts propaganda supporting the Nazi regime and wishes it could work in the United States too.

Dr. Kassell also spreads Nazi propaganda at their behest, and said propaganda starts luring in disgruntled loser Kurt Schneider (Francis Lederer). He turns to espionage to get some money from the Reich, and as "Sword" gets his Army buddy Werner Renz (Joe Sawyer) to betray his country.

All this nefarious activity eventually attracts the attention of the FBI. One of its top agents, Edward Renard (Edward G. Robinson) is convinced that "Sword" is part of a Bund Society. Eventually Renard tracks down Schneider, who gives up his German contacts through flattery versus force. Some of the Nazi agents are caught and tried, while others, like Kassell, are repatriated by the Gestapo most unwillingly. This bungled Fifth Columnists all fall into the hands of American justice. Confessions of a Nazi Spy is less than its daring title promises. I think it is because it is so overt in its storytelling that today it veers a bit close to kitsch. Of particular note is the ending where Renard and a fellow agent discuss the trial. To the growing swells of America the Beautiful, both wonder out loud about the greatness of our system.

Again, subtle it is not.

One thing that I kept wondering was whether having so many accented actors made Confessions of a Nazi Spy a bit too outlandish to believe, even if the story was based off news articles detailing such activities. You had Lukas and Lederer with strong accents as these nefarious accomplices, but then you had the very light and pleasant manner (and more American-sounding) Werner Renz. It did make me wonder whether director Anatole Litvak might have been better served to have Americans as the spies.

I think it is because it would be too easy to accept "foreigners" or at least foreign-sounding people be part of a conspiracy. It might also perhaps have helped if perhaps Lukas' Dr. Kassell had been more a dupe than an overt agent. It is a bit too easy to believe the foreign Schneider was already sympathetic, but perhaps if the one seduced to the Fatherland's worldview was a more "all-American" type, it would have made it more plausible to go undetected.

One thing that wasn't thought of then that might be thought now is how Confessions of a Nazi Spy could feed suggestions of disloyalty from naturalized citizens. It might be that having non-native born Americans implies that all non-native born Americans are suspect, a mindset that sadly led many Japanese-Americans to internment camps. To be fair, the film is not responsible for such acts and focuses on German versus Japanese agents. However, is it that far of a stretch to see how "foreignness" of the Germans in the film might make the "foreignness" of the Japanese suspect?

As a side note, Confessions of a Nazi Spy went off into curious territory. There was a whole subplot about Kassell's private life with a wife and mistress that seemed to be from a whole other film. What Kassell's bed-hopping has to do with anything one can only guess at.

A final issue is the similar-sounding names. You have Schneider meeting his German contact Schlager (George Sanders) and pretty soon one can be forgiven for trying to figure out who is who. Seeing Sanders here one wonders where he goes, along with who gave him such an awful haircut.

If there is a saving grace in Confessions of a Nazi Spy, it is the surprisingly small but effective role of Edward G. Robinson as the shrewd FBI agent. It's nice to see Eddie on the right side of the law for a change, and in his quiet but firm manner he makes Agent Renard a formidable figure. He rarely if ever rages, and certainly not in his confrontations with Schneider. Here, the scenes between Robinson and Lederer are excellent: how the ego of one is manipulated by the other into delivering said confessions.

This cannot be said for most other performances, which seemed to border on camp. Lukas seemed to be almost cartoonish as Kassell and at times Lederer too seemed to be overdoing the "I'm EVIL" bit. A scene involving Ward Bond as an American Legion member disgusted by the Bund meeting is surprising but effective. Also to the film's credit, it does show that some Germans were appalled at the Nazis behavior and condemned it.

Confessions of a Nazi Spy feels a bit of a slog given its running time, and it probably would qualify as propaganda now. Still, strong performances elevate it and offer a view of a time when Nazis were seen as a nuisance versus the menace they really were.