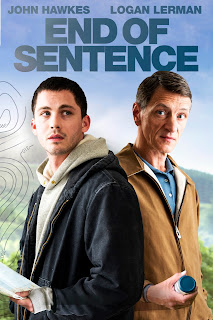 For longtime readers, I think you are aware I am coming out from a very dark place. I am in double grief: I lost both my job and my mother back-to-back. It's been a devastating time, and as such I simply was too overwhelmed to watch anything, let alone review any film.

One thing Mom imparted with me, however, is that "life is for the living". Yes, we should grieve but to stay in perpetual grief, to turn her home into a museum or mausoleum would appall her. As such, I am slowly reemerging. There is no set time to stop grieving, no "end of date" where you cease suffering. It lessens but it never truly ends.

That brings me to End of Sentence, perhaps the oddest choice for which to finally emerge from my embargo due to mourning given the film centers around the death of a mother. However, with strong performances and a simple yet heartfelt story, End of Sentence will move one deeply as the strangers known as family navigate troubled waters. 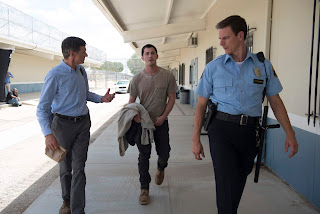 After his wife's death, widower Frank Fogle (John Hawkes) will honor her final wish to have her ashes scattered on a lake in her native Ireland. She also wanted Frank to scatter the ashes with their son, Sean (Logan Lerman). This is easier said than done given Sean was just released from an Alabama prison for auto theft and Sean harbors many resentments against his very quiet, passive father whom he always calls "Frank".

Circumstances being what they are, Sean agrees to go if they can wrap all this up within five days, allowing Sean the chance to go to Oakland for a new job and life far from Frank. Sean never bothers to hide his disdain and seems to go out of his way to disrespect and belittle Frank, who constantly swallows up the abuse.

As they attempt to endure each other, Sean picks up the beautiful and mysterious Jewel (Sarah Bolger), whom he insists travel with them. Reluctantly, Frank goes along with this, and on their way to honor the deceased's wishes secrets are revealed, side trips are unexpectedly taken and father and son learn to understand each other. In the end, both Frank and Sean are released from their own pain and see things from a wider perspective. 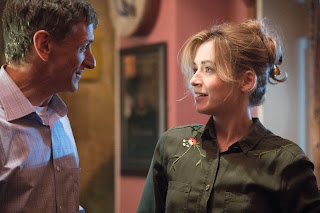 End of Sentence, written and directed by Elfar Adalsteins, does not reinvent the wheel. In certain ways, it is a very simple and almost predictable story: surly son and emotionally restrained father reconcile with a pretty young thing thrown in for good measure. However, the simplicity and straightforward nature of End of Sentence allows us to focus on the Fogles' metaphorical and literal journey.

This is a movie that slowly works to win the viewer over, and a major credit goes to the three principal actors. John Hawkes truly is a national treasure, and End of Sentence is another in a catalog of exceptional performances. Hawkes' Frank is not an unemotional man, but rather a man who fears emotion. Over the course of the film we see how his emotional restraint served as a coping mechanism to his life, lending his characterization a deeper, more poignant element.

It is easy to like Frank, to sympathize with him. It is a credit to Hawkes as an actor that he displays Frank's emotional struggles, his doubts and fears, with his body and face more than his line delivery. Seeing Frank slowly change is a beautiful thing, and John Hawkes makes Frank a fully-realized person versus a character to play.

The mind does boggle at the idea of Logan Lerman as a hardened criminal, even with tattoos. At times it seems Lerman is trying too hard to be the unpleasant, angry Sean to where you think he is "acting" versus "being". However, he does have an excellent and moving moment in his final scene with Bolger, which perhaps indicates that Lerman may have untapped skills. End of Sentence has not won me over to being a Logan Lerman fan, as I have disliked most of his films (and him in them). However, at least after End of Sentence I'm not going to automatically write him off. 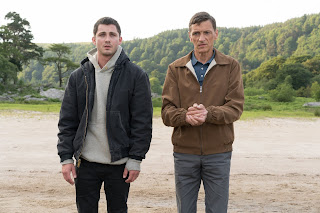 Sarah Bolger is excellent as Jewel, giving her a complexity that makes her both sympathetic and treacherous. She reminds me of another Irish actress, Saoirse Ronan, not just in looks but in exceptional acting talent. Bolger takes what could be a cliched role (the beautiful but potentially duplicitous woman) and makes her into a flawed figure, one who can care about and take advantage of the same people. She is a survivor, a complicated and contradictory character whom you wouldn't mind seeing a whole film about.

I've no objection to End of Sentence II: Jewel's Journey.

It is not hard to fall in love with End of Sentence, despite what could be at times a predictable story. A beautiful soundtrack, the lush Irish countryside and two exceptional performances plus a surprisingly strong turn from Logan Lerman all make this a very worthy watch. End of Sentence will move the viewer and show that sometimes the wounds we carry can be healed through those simple acts of love, understanding and forgiveness.