Killer Inside: The Mind of Aaron Hernandez. The Television Documentary 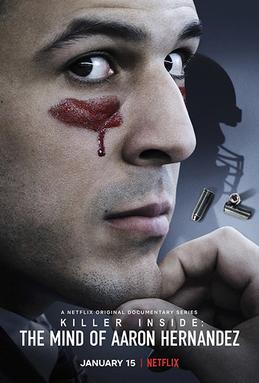 KILLER INSIDE: THE MIND OF AARON HERNANDEZ

There has been a surprising and sudden rise in interest in the story of New England Patriots tight end and convicted murderer Aaron Hernandez a mere two years after his suicide. At least three documentaries and docudramas have been released chronicling Hernandez's life, alleged crimes, death and postmortem revelations. Reelz Channel has two so far: Aaron Hernandez's Killing Fields and a sequel of sorts, Aaron Hernandez: Jailhouse Lover Tells All. The Oxygen Network has a rival docudrama: Aaron Hernandez: Uncovered. Even the Oprah Winfrey Network got into the act with its three-part series Aaron Hernandez: An ID Murder Mystery.

Not to be outdone, Netflix has its own documentary series. Killer Inside: The Mind of Aaron Hernandez probably gained the most attention due to both coming from a more well-known broadcaster and for the salacious revelations that the disgraced NFL player had a secret homosexual life. The dichotomy of the very macho football player and sexual, perhaps even romantic relationships with other men is something that only Hernandez could give definitive answers to. Killer Inside is surprisingly free of tawdry elements, but after watching all three episodes the entire tragedy of every aspect of Hernandez's life, let alone those who had the misfortune of coming into contact with him, comes into focus.

Killer Inside covers both Hernandez's life and career on and off the field. A football prodigy, Hernandez came from a family of players, until a series of catastrophic events twisted the gridiron hero. There was his father's sudden death when Aaron was 16. There was his mother's affair with a family friend that broke up the marriage. There was the lure of other family members who brought him into contact with unsavory people. 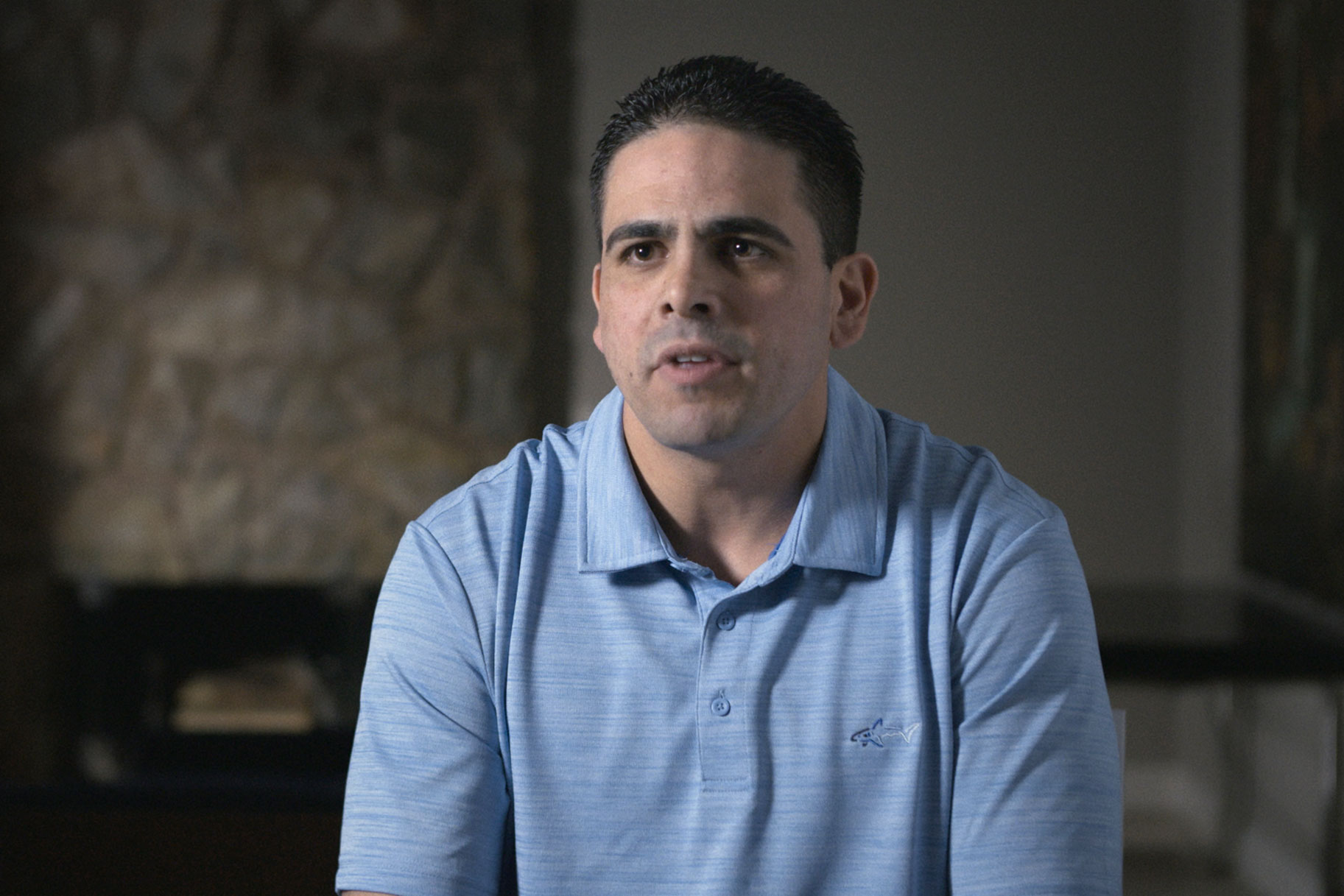 And then there was his very secret, very private, very hidden homosexual encounters. Killer Inside features Dennis SanSoucie, Hernandez's high school football quarterback who, almost casually, admits that he and Aaron from the 7th grade to their junior year in high school had a sexual relationship. It was part experiment, part physical pleasure, but was it part or wholly love?

Aaron Hernandez kept making poor decision after poor decision, perhaps in part to drown out his deep personal traumas. He went to the University of Florida rather than nearby University of Connecticut, where he could have been with his brother. U of F was more seductive in that there he could indulge in activities both sensual and criminal despite the ostensibly Christian oversight of Gators quarterback Tim Tebow and coach Urban Meyer. Already highly emotionally immature when he graduated early to play for the Florida Gators, U of F exacerbated his violent tendencies.

He next managed to get drafted by perhaps the worst team for him: the New England Patriots, where he could reconnect with the bad company he kept before going to FSU. From that, despite a long-term relationship with high school sweetheart Shayanna Jenkins and fathering a daughter, Hernandez still had various issues that his exceptional football career masked. While drugs were an issue, it was his continuing violence off-the-field that was the most dangerous.

That culminated in the murder of Miss Jenkins' sister's boyfriend Odin Lloyd. Hernandez became the prime suspect, was arrested and quickly dumped by the Patriots. The Lloyd murder was when Hernandez was finally charged with a crime, but soon previous actions including past murders came to light. Convicted of Lloyd's murder, another murder case brought an acquittal. While in the midst of his appeal, he was "outed" on a sports talk show with various crude remarks about "tight ends" and "receivers" on April 17, 2017. On April 19, Aaron Hernandez was found dead.

Killer Inside builds its case that Aaron Hernandez was a perfect storm of troubled individual and essentially serial killer. Director Geno McDermott does an excellent job weaving the various interviews and archival footage. The episodes end with excellent cliffhangers that keep the viewer both interested and intrigued into both the various crimes and the man himself, troubled and troublemaking.

The factors that drove him to horrifying acts are presented, but Hernandez does not come away as either victim or villain. Instead, Hernandez comes across as a man shaped by elements both external and internal; from the loss of his father to his sense of entitlement, we see the individual with virtues and terrible flaws.

Killer Inside is part mystery, part biography, and to its immense credit it doesn't forget the primary victim of Hernandez: Odin Lloyd. One could argue that the portrait of Lloyd is perhaps rather loving, someone who apparently had no flaws apart from associating with Hernandez, but at least the documentary series recognizes Lloyd's life and death and not treat him as an afterthought.

In the whole tragic, tawdry story of this talented but troubled player, we hear his jailhouse telephone recordings and can see how his family shaped him to where he ended up in. His mother Teri at times seems caring, at other times selfish. On one call, she tells her son "Give me a million dollars and I'm set for life!". His father Dennis pushed him and his brother D.J. to excel but also literally pushed them around violently. His cousin, whose husband ended up having an affair with Teri, stayed loyal to Aaron until her dying day, but also introduced him to criminals who had a hand in his downfall.

The big reveal, the big shock, is the issue of Aaron Hernandez's sexuality. Only Aaron Hernandez could say whether he was gay or bisexual. He was openly homophobic, and the suggestion that he feared his true sexuality would be exposed is presented as a possible motive for the Lloyd murder (one of a series of murders Hernandez may have committed). Killer Inside also reveals in Episode 3 that he was sexually abused as a child, and that Hernandez feared this "turned" him gay.

Killer Inside, however, cannot answer whether Hernandez could love a man romantically. He may have had sex with other men. He may have desired other men sexually. However, could he love a man? Could he even have loved his longtime girlfriend Jenkins? On matters of the heart versus the body there can be no answer, only speculation.

We hear often from Ryan O'Callahan, a former NFL player who came out as gay shortly after Hernandez's suicide. While it is good that O'Callahan can embrace his identity, his interviews come across as from a whole other subject. We can take SanSoucie's word that he and Hernandez had a long-lasting sexual relationship, but nowhere does the term "love" come up. Hernandez, I would argue, loved his daughter and according to his longtime girlfriend never gave indications that he may have been attracted to other men.

It would be too simple, too pat, to place internalized homophobia as the driving factor in Hernandez's actions. As one of the interviewees states, "The decisions lie with him. The consequences lie with him". Killer Inside allows for the idea that whatever factors internal or external drove him, in the end it was Aaron Hernandez who made those fateful and fatal decisions.

We are all on the outside looking in, and as journalist Kevin Armstrong observed, "The why is the story here". Killer Inside is as close to seeing that "why", even though we ultimately will never fully know it. Sharp, insightful and ultimately tragic on so many levels to so many people, Killer Inside is the rare docu-series that one can binge on while learning that not all that glitters is truly golden.