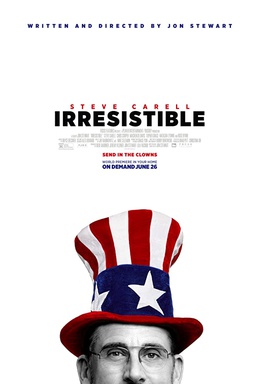 On the Jeeves & Wooster series, the spoof of British Fascist Sir Oswald Mosley, Sir Roderick Spode, attempts to recruit our valet into his Black Shorts movement by suggesting Jeeves is the perfect man to appeal to "the working masses". Jeeves, nobody's fool, is not amused, rebuffing Spode's offer by stating that he and "the working masses" have barely a nodding acquaintance.

I imagine Jon Stewart, writer/director to the political comedy Irresistible is similarly on barely a nodding acquaintance with the working masses. Judging by the film, Stewart is also on barely a nodding acquaintance with the art of cinema. What Stewart appears to think is a sharp, witty send-up of how money corrupts American politics is in reality not funny, not bright and not worth anyone's time be he/she viewer, cast or crew.

Devastated by his failure to help get a woman who'd been running for President for sixteen years elected President and losing to a moron, Democratic political strategist Gary Zimmer (Steve Carell) thinks he has found the savior of the Democratic Party in as Irresistible puts it on-screen, "Rural America, Heartland USA" (later identified as Deerlaken, Wisconsin). He's retired Colonel Jack Hastings (Chris Cooper), whom Zimmer identifies as "looks conservative, sounds progressive" thanks to Hastings' impassioned speech opposing ID laws for non-citizens.

It's off to the wilds of Wisconsin, where Zimmer must contend with all the yahoos who live there in an effort to convince Colonel Hastings to run for Mayor. His agonies are endless: no Wi-Fi, no locks on the doors, the men having an informal beer club and the women forcing him to drink coffee not to his liking. The potential success of a gun-shooting liberal winning a mayoral race in a red community apparently so alarms Republicans that they soon start flooding longtime Mayor Braun (Brent Sexton) with cash, along with their own master operative Faith Brewster (Rose Byrne). The GOP can't have a candidate described in one of his ads as "A Redder Kind of Blue" winning lest they lose their rural strongholds. As the two battle it out with their swanky fundraisers, Super PAC fronts and general dirty tricks, Hastings and his daughter Diana (Mackenzie Davis) look on with a mix of amusement and puzzlement.

At last, it's Election Day, but alas, it's a case of who's zoomin' who: the entire election was a scheme cooked up by the good folks of Deerlaken to flood their community with millions of campaign dollars to keep their town alive. In the end, Zimmer and Faith see they really do deserve each other. 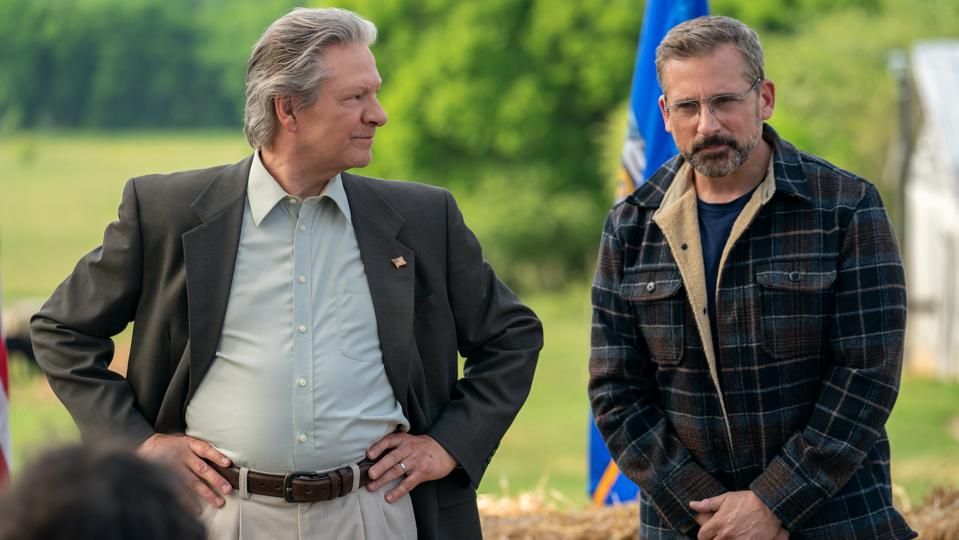 What the viewer deserves is a good movie, which Irresistible is not. Its problems start with the characters. I am at a loss to understand why Stewart thinks ridiculing the rural citizens is the same as ridiculing the "swamp" creatures of Zimmer and Faith. The film suggests at the end that the Deerlaken citizens were playing up the stereotypes of rural Americans, but there is an undercurrent of contempt for them in Stewart's script for them. Rather than come across as "dumb as a fox", the Deerlaken residents just came across as tired caricatures.

One in the series of faux-ads for Mayor parodies Republican ads that play on fears of violence and terrorism, but this seems so idiotic to think a small-town mayoral election where Mayor Braun has been elected often would suddenly take on the trappings of a Presidential election. If, perhaps Stewart had opted to make it a House election where there are national repercussions the political commentary he so desperately wants to make might have worked. However, if this took place in reality it is highly unlikely that either national Democratic or Republican operatives would even care about some one-horse hick town.

As a side note, I genuinely wonder if Jon Stewart has even ever been to Wisconsin or thinks, like Zimmer, it's some kind of foreign land where dial-up Internet is still the norm, at least for those who know what the Internet actually is. I went to Wisconsin last year, Appleton to be precise. While I can testify to the friendliness of Wisconsinites I can also say that even rural Wisconsinites are aware of the world. Irresistible is the type of film that thinks "connecting" with rural Wisconsin means listening to Glen Campbell and watching footage of one Green Bay Packers game.

OK, on the last one he's probably right, but I digress.

The series of ads, made to mock the front organizations that create them, are frankly too dumb to mock. Stewart's suggestion of powerful old men who pay for sleazy campaigns is frankly cringe-inducing. Hasting's sugar daddy Sir Elton Chambers (Bill Irwin) is a ghastly vision: a virtual auto-animatronic figure that looks like it wandered off a Z-level science-fiction film, complete with robotic sing-song voice. Why Stewart thought any of this was hilarious makes one question his very sanity. We get a tiny hint of a Koch-like pair of brothers, completely with scooters, but they were literally there for show. The performances are almost equally appalling. The alleged repartee between Carell and Byrne is so forced and fake it they went beyond phoning it in to texting. Carell is so flat at times he looks genuinely bored, unsure or perhaps unwilling to bother making Zimmer a functioning character let alone human. Byrne isn't much better but at least she appeared to enjoy looking foolish. Cooper's main qualifications for being "A Redder Kind of Blue" is being an old white guy, but Hastings never convinced he had a genuine motive for "running" for Mayor even before the jig was up.

Even in his very and mercifully brief appearance, Bill Irwin should be embarrassed.No one is THAT desperate for money, or at least should be.

Surprisingly, Mackenzie Davis is the only one who spares herself any shame with her Diana, a woman who comes across as bright and caring. However, Irresistible suggests there may be a romance with Zimmer despite her saying she's 28 and him being considerably older. There isn't enough chemistry there to make that remotely plausible. Also, in real life Davis is 33 and Carell is 57, making him old enough to be her father. That he bizarrely ends up with Faith despite there being no chemistry between either the characters or actors is another insult to the audience.

Irresistible creates a scheme so outlandish that it doesn't even make sense in its own world, let alone the real one. It certainly thinks its clever in its "takedown" of politics as usual with the fundraisers and talking heads, but it is surprisingly toothless in its critiques. A scene where Hastings attempts to raise funds from a group of liberal elites could have mocked "radical chic". Instead, despite the possibility of evenhanded ridicule Stewart opted to not go for the jugular in spoofing Upper East Side New Yorkers.

To be fair this did have a good moment for Cooper where he quietly condemns them for having to ask for money from outsiders of his community, but that moment is a lost opportunity in a dull political satire that isn't satirical or intelligent but lazy.

Irresistible has a fixation on money in politics, particularly with Super PACs that routinely run campaign ads for a candidate under the guise of not being in cahoots with said candidate. I would recommend Jon Stewart channel his efforts into a documentary versus something as unfunny as Irresistible.