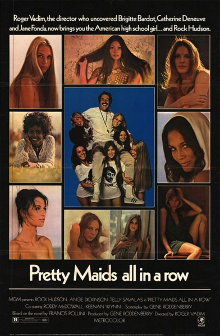 PRETTY MAIDS ALL IN A ROW
I figure that Pretty Maids All in a Row was meant as either a sex farce or a murder mystery. Maybe the people behind it thought they could blend the two into something witty, risque and silly. Sadly, they failed by a long shot.
Ocean Front High School is in the middle of various crises. There's randy guidance counselor/football coach Mike "Tiger" McGrew (Rock Hudson) who is schtupping every pretty maid he can lay his hands on. Then there's the murder of pretty little cheerleader Jill, whose body is found in the boy's room by Ponce (John David Carson). Carson not only has the unfortunate luck of finding Jill's body, but he is going through severe sexual tension, the parade of pretty young things that cause his uncontrollable erections.
McGrew takes Ponce under his wing and arranges for sexy substitute Miss Smith (Angie Dickinson) to help Ponce overcome his sexual issues. The body count keeps going up, frustrating Captain Surcher (Telly Savalas). He knows what we already know: Tiger is the serial killer, but he just can't prove it. Ponce can, but will he live to boink Miss Smith again? 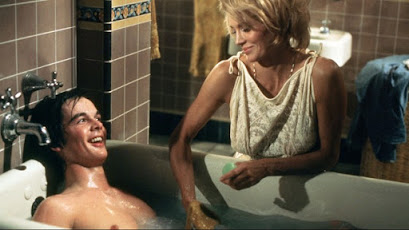 Pretty Maids All in a Row is the only film Star Trek creator Gene Roddenberry wrote specifically for the screen, and whether many a Trekker/Trekkie can relate to Ponce is something I will leave up to individuals. I do wonder whether Roddenberry in adapting Francis Pollini's novel failed to get whatever he saw in it. Granted, I have never even heard of the novel but Pretty Maids All in a Row is incapable of balancing the sex farce and murder mystery stories.
The imbalance is due because Roddenberry's script and Roger Vadim's directing shift wildly from one to the other. You have the sexual hijinks of Miss Smith and then what is supposed to be a series of shocking murders. Some of the actors attempt to play up the farce aspect: Roddy McDowell (!) as the addled Principal, Keenan Wynn as the idiot Police Chief.
Others, however, appear to think they are in a serious drama: Savalas plays things thoroughly straight. This makes Pretty Maids All in a Row muddled and confused, not to mention nowhere near as funny or witty as it thinks it is.
Dickinson I think did her best but sometimes it is far too obvious that she is playing up the comic temptress far too much. No one could knock her knockers on a boy's face without noticing, but she does it at least twice. You can't utter the line "You don't think I'm going to eat you?" to a kid she knows has erection issues without seeing the double entendre. 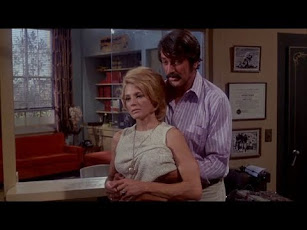 Rock Hudson, middle aged spread and all, is rather creepy when he's bedding teenage girls, the porn mustache adding an extra layer of oddity to the proceedings. He plays it as though he knows all this is garbage or he somehow lost his way after Doris Day.
Curiously, at the end when he is found out as the killer by Ponce we see that he can be surprisingly menacing, and it's a shame that Pretty Maids All in a Row tried to play a lot of this for laughs when a more straightforward murder mystery might have allowed Hudson a greater performance.
Carson, I thought, was effective as the bumbling virgin and about the only person who seemed to get that murder is a serious business. It wasn't a great performance but on the whole serviceable.
Perhaps the oddest curiosity in Pretty Maids All in a Row is that the theme Chilly Winds is sung by of all people The Osmonds. It's a strange blending: the squeaky-clean Mormons singing to a tale of wanton sex and murder.
Pretty Maids All in a Row is tawdry and tacky, like a B-level porn film where all the sex is taken out, something that might have popped up on USA Up All Night. It's not funny when it thinks it is, it's not interesting when it thinks it is. It's just there.
DECISION: D-
Posted by Rick at 4:39 PM