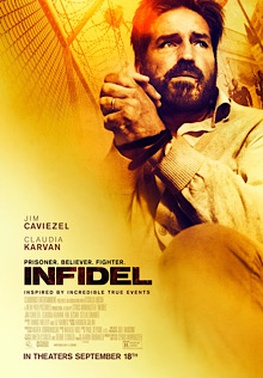 Dinesh D'Souza, political provocateur whose non-fiction films like Hillary's America: The Secret History of the Democratic Party are weirdly watchable, has shifted to fiction filmmaking. Infidel may be hampered by skimming at times through characters and some weak acting. However, with some surprisingly strong action sequences and more surprisingly sympathetic portraits of the villains, it can be a good diversion for those who dare go to cinemas.

Christian apologist blogger and businessman Doug Rawlings (Jim Caviezel) maintains a friendship with Muslim businessman Javid (Aly Kassem), jokingly calling him "Infidel". Doug's wife Liz (Claudia Karvan) works at the State Department and it's an open secret that she's an intelligence officer (aka spy). It's after the disappearance of Javid's daughter Mina that Doug, but not Liz, finds that Javid is really a spy and terrorist supporter for the Iranians. 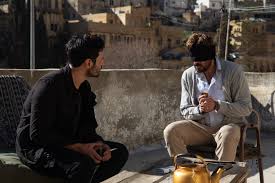 Some time later, Doug is persuaded to go to Cairo for a live interfaith dialogue. Despite Liz's warnings Doug does the unthinkable: he openly shares the Gospel to Muslims. He's quickly abducted by the half-Kurdish half-Persian but all-British Hezbollah operative Ramzi (Hal Ozsan). He tortures and bullies Doug, more so when Doug almost escapes. Ramzi eventually turns him over to the Iranians, who put him on trial as a spy (though the Christian thing doesn't help).

Liz, aware of Doug's plight, then travels to Teheran to see if she can get Doug out, no easy task. That is, until she finds sympathetic allies: secret Christians, more secular Muslims who detest the theocracy, and two Mossad agents who plan to use Doug's escape as cover to get their agents out. It all culminates in a daring, explosive escape that Ramzi attempts to stop.

I can't quite call Infidel a "Christian" film because Doug and Liz's faith was a bit in the background. The film touches on Liz's crisis of and loss of faith after a deep personal tragedy, and Doug is very open about his own Christian faith. We also get a brief scene where Doug looks through his prison window and asks God where He is.

However, Infidel is more interested in the action elements. Writer/director Cyrus Nowrasteh shaped a lengthy climatic action sequence that does hold your attention. It's the highlight of the film, and it even manages to be exceptionally contemporary with mention of the coronavirus (the women's protest outside the prison about the virus possibly infecting their relatives giving the rescue team a perfect cover to storm the prison). 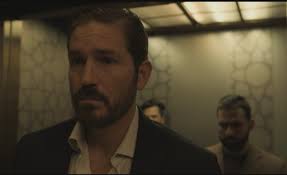 Infidel also should be credited with having a touch of nuance to its Islamist characters, particularly with Ramzi in a standout role for Ozsan. With his strong British accent and constant use of "Mate", Ramzi is not an Islamic stereotype. Nowrasteh even gives Ozsan a brief monologue where he talks about the discrimination he faced as a young man in Britain, which explains how he turned violently against the West. It's small but so well underplayed, making it a surprisingly natural moment.

It gives Ramzi a touch of humanity, which is more than can be said for Javid and the not-seen but clearly understood implication of Mina's "honor killing". It also shows Ozsan outacting Caviezel. His Doug perhaps misunderstood "stoic" for "almost emotionaless", as he seemed to be blank in the role. There was little emotion from Doug, even when we have flashbacks to that traumatic shared experience between him and Liz. When sharing the Good News to his Islamic audience, I didn't sense the passion of the Christ in him.

Karvan did slightly better as Liz, though at times her character seemed surprisingly dumb for a not-so-secret agent. Why would she willingly go with men who approach her with "pictures" of her husband, especially after being warned against such activities?

Infidel is not a particularly strong film, but it can serve as a good distraction. It skims a bit through the ideas it is presenting about faith and oppression, but it is not bad and is lifted with a good climatic prison breakout and escape from Teheran.